Hey-o Yes Homos! Is it ever your lucky day! March’s theme has been “Here/Queer” — stories with a strong sense of place — and ’cause we feel like there are so many more city guides and et cetera to be written and read in this great big world of ours, we’re gonna keep publishing these city guides periodically over the next six weeks or so. We will have an April theme as well though, so hang tight.

We’re especially interested in somebody doing a guide for Los Angeles, ’cause a lot of A-Campers will be taking some time in the city at the end of April while journeying to camp!

We welcome submissions from wherever, and we’re especially looking for:

If you wanna submit a city guide, email Laneia with a letter describing your connection to the city you wanna write about. She’ll let you know if it’s already been taken or not, at which point you’ll be responsible for crafting a comprehensive guide (see other guides for tips) and providing at least five of your own high-res photos (which you own the rights to), links to the places you talk about (and phone numbers/addresses when necessary), and whatever insidery details you’ve got.

Secondly, Our April Theme is “On Camp.” 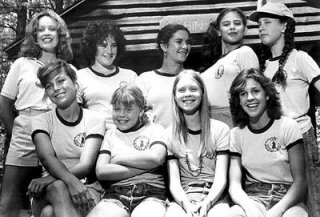 We’ll be publishing more Here/Queers as well as “On Camp” posts from April 1st – May 15th, at which point we’ll announce the June theme and then take a breather! Isn’t it cute how we like to make things as complicated as possible? I thought so!

“On Camp” is — you guessed it! — about camp, and we chose this theme to celebrate the launch of our first ever A-Camp, taking place the last weekend of April.

On Camp pitches could include anything from “how to build your own shelter” to your favorite trail mix recipe to the history of girl scout camp to a personal essay about how your torrid affair with another lady at band camp helped you accept your homogayness. It need not be explicitly queer, but we do prefer stories that explore or relate to issues that affect queers, feminists and/or outsiders.

Examples of “On Camp”-ish material from around the web:

+ How Nerd Camp Saved my Life, nerve.com – “The summer I was 14, I went to two different summer camps. The difference between them summed up the central crisis of my life at the time: Was I going to identify as the geek or the Kid With Issues?”

+ Notes on Camp, nerve.com – “Public masurbation and other things I learned at Vacation Bible School.”

+ Summer School Is Bunk: Why Camp Shouldn’t Just Be for Rich Kids – “Admittedly, my skepticism about year-long school is connected to my own summers, which were unusually fruitful. My parents were able to afford to send me to a summer camp where I learned not only swimming and sports, but history and politics. “

+ Notes on Camp, rookie – “First kisses, Friendship Night, and the importance of snuggling.”

+ Camp Out, nerve.com – “The director of the first gay Christian summer camp on turning the political tide.”

+ Ten Movies to Go Watch if You Can’t Go to Summer Camp, Gawker – “As June creeps on, school kids across the nation are getting released from the crumbling prisons that are America’s schools and being sent off to life-guarding jobs, coal mines, or, if they’re lucky, sleepaway camp. Not one of those lucky kids? Well here are some movies to watch that will make it feel almost like you’re there.”

+ What I Learned at Luxury Boot Camp, Good Magazine – “If you are among [the wealthy who can afford it], wonderful: I highly recommend you explore it as an option if you’re looking to seriously reboot. If you are not, click through the slideshow to read about some of the lessons I gleaned from my week on Ranch time.”

+ My Imaginary Wet Hot American Summer, The Rumpus – “Even though I’m Jewish, I never went to summer camp. A popular girl in the sixth grade called me “Pizza Legs,” because of my purple spider veins and red splotches and moles—bright, textured flaws that looked like pizza toppings on pale skin. During a pool party, I refused to get in a swimsuit, and a different popular girl called me a lesbian. What did a lesbian look like, I wondered. I guess they looked like me. I tried not to look like me. I’d now like to imagine what summer camp could have been if everything were different.”

+ Notes on Camp: This episode of This American Life has quite a few examples of what we’re looking for (but in writing, not audio, obvs)