As you have perhaps realized by now, everyone on the autoteam spends between 90 and 150% of their life on the internet. This is cool as long as you only want to watch endless Brittana gifs, but sometimes the endless abyss of it all gets a little overwhelming, and you need some tools to divide it (it being the internet/your life, which are synonymous in this instance) into more manageable bite-size pieces. If that’s where you’re at lately, then maybe we can help! Here are our personal favorites for making our lives a little easier, or at the very least more aesthetically pleasing.

Rachel: The best to-do list, in my opinion, in the entire world ever. Its beauty, both literal and figurative, lies in its simplicity: it’s very minimalist, and very intuitive. Add tasks to days; if they’re not completed by the end of it, they’re automatically rolled over onto the next day, or you can drag and drop them wherever you want. There’s also space for a longer-term list of future tasks, which is very useful if you do something like, oh, run an online magazine where you have to keep track of multiple posts/projects over a period of time. 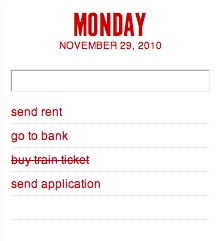 Rachel: Really the only way I process anything in life – my day, my goals, tasks, basic human emotions – is via lists. I have entire notebooks and documents and parts of my heart dedicated to making lists. Sometimes, though, you need a really intense list – double list, all the way across the sky, you know? That’s when you turn to something like Workflowy. Its relatively user-friendly workspace allows you to map out any project, idea or goal in list format, nesting as many lists inside each other as you need to fully organize yourself. This didn’t make a ton of sense to me the first time I heard it, but if you have a project with a lot of details or steps to keep track of, I can’t imagine a better tool than this. Here’s an example. On a related note, you now know where I’m applying to grad school, but, uh, please don’t stalk me!

Rachel: This is a relative newcomer as far as Internet Things go, but it looks kind of promising! Right now you still need to wait for an invite to participate, but once you’re in, you can create a series of virtual bulletin boards upon which you can “pin” any online bauble that catches your eye. It’s less like tumblr, where your goal is to show off that object to others, but more a place where you can collect things that you think you might want to come back to later. For instance, you might have pinboards labeled “books I want to read” or “recipes i want to try” or “boyshorts i fantasize about owning.” And then when you win the lottery, you can just go back to that pinboard and you’ll know exactly where to blow it all. You can also follow other people’s pinboards, so if there’s someone special out there you’d like to get to know better you can keep track of what boyshorts they want, and have a very special Valentine’s Day. I don’t know. I’m not super excited about it yet, but I’m keeping an open mind. 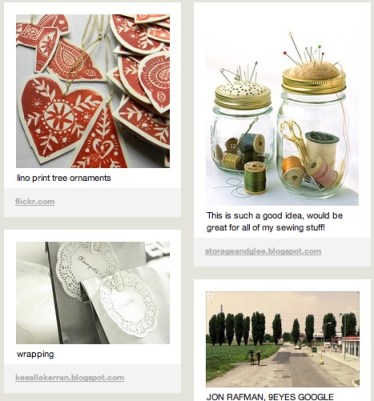 Taylor: I’ve been using Tumblr for longer than anyone I know. When Tumblr and I began our hot and heavy affair, it was more of a Blogger competitor than anything. Of course, it’s is now widely considered to be more of a micro-blogging platform, kind of like a visual version of Twitter with copious amounts of lens flare. It works great like that or as a more traditional blogging platform (even though I still think people think I’m weird when I put words in mine), but I like to use it as a personal scrapbook, almost exactly like that Pinterest snake oil Rachel’s selling you. I clip little things around the web I like and want to remember later. Sure, I tumble things to share them, but to me blogging on Tumblr is kind of like writing into a void, except the void wears ironic thick-frame glasses. Tumblr has lots of lovely themes, so I still think it’s the best way to collect things you like for later. Maybe everyone else is also using Tumblr like this and it just feels like we’re all sharing things with each other. I don’t know; I still like it. 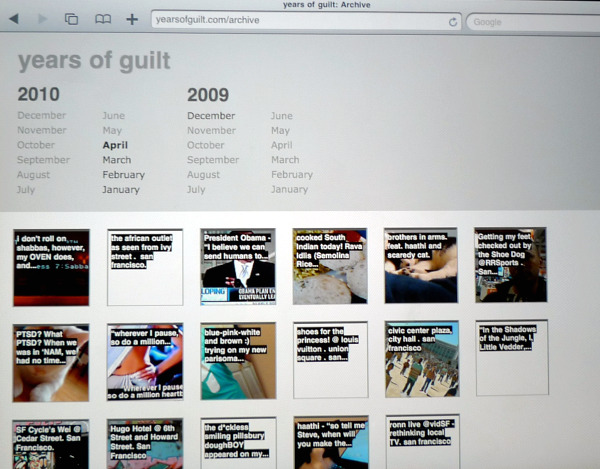 Taylor: I write a lot. Actually, I write all the goddamn time. Whether you’ve got blogging to do, hatemail to draft, or you just like to jot down notes, Simplenote is where it’s at. Simplenote is a many-headed beast, but all its respective heads are good and will help you with writing shit down really quickly and easily. It’s completely life-changing to be able to just write whenever the moment strikes you (or whenever you have to) without fumbling around  with loading a program, saving every so often, and all of that other nonsense. Seriously, if you’re still using MS Word or even Google Docs or Text Edit or Notepad or anything else, do yourself the best favor ever. One day I will make Riese use this and that will be the best day of her life. Also, it has clients available for Windows and Mac, but Notational Velocity is my current fave. 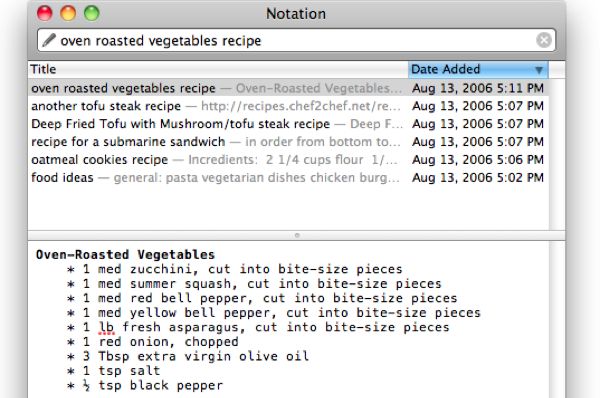 Taylor: It’s kind of hilarious that I didn’t discover this sooner, like when my commute and sanity necessitated its existence. Instapaper is awesome for marking things to read them later. It’s basically just a tool to virtually dog-ear whatever you find on the web, but it works best for text. I often see a huge article on the New York Times or Wired or what-have-you that I’d love to read later, but I know I’ll forget, even if I tweet, tumblr or Facebook like it. Instapaper adds an extremely simple bookmark I can click and voila– I can read whatever hulking wall of text caught my eye later. That feature on its own is cool, but not unique. The kicker is that Instapaper lets you cache articles. That means every time you mark something with Instapaper you can read the full text later, offline. I’ve been marking stuff like crazy in anticipation of a flight I have next week, so I can’t wait to unearth this vast treasure trove of long, fascinating articles. Also, it integrates with most RSS readers, so if you read a million things a day or would like to, make sure to link it up to whatever reader you use. 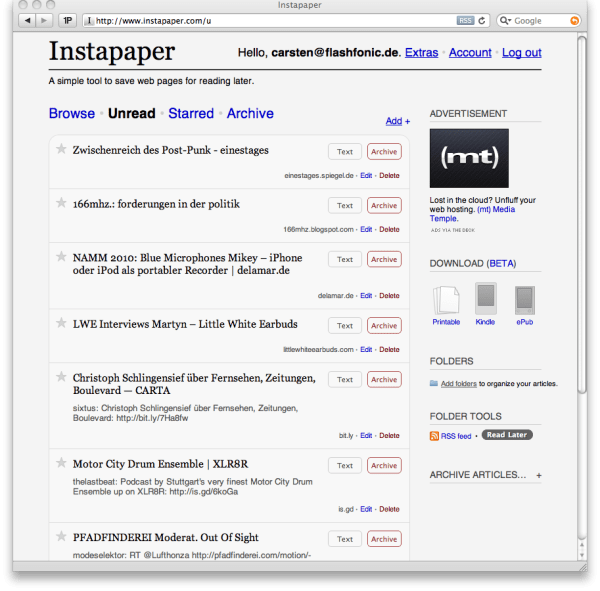 Taylor: If you read, pretend to read or skim a large volume of things on a daily basis, this tip is for you. Many people already use an RSS reader like Google Reader or the like, but I’ll highlight my two favorites just in case you’re shopping around. Which you should be because these guys improve on the feed reading experience and then some. If you’re new here, an RSS reader allows you to group all of your favorite sites into one place. Instead of skipping around from URL to URL, you can skim headlines (which you sort into folders however you like) and read articles, all within one central little news hub. NetNewsWire for Mac is my first pick. It’s a really fast, clean news reader that’s perfect if you read a seriously large amount of stuff on the web. For power-reading, it’s a big step up. And Pulse for Android, iPhone and the iPad is an amazing mobile option, but it probably handles 20 or so of your favorite sites better than a mass RSS deluge like NetNewsWire does. And if you don’t have a Mac or these mobile platforms, get your feet wet with ye olde Google Reader. 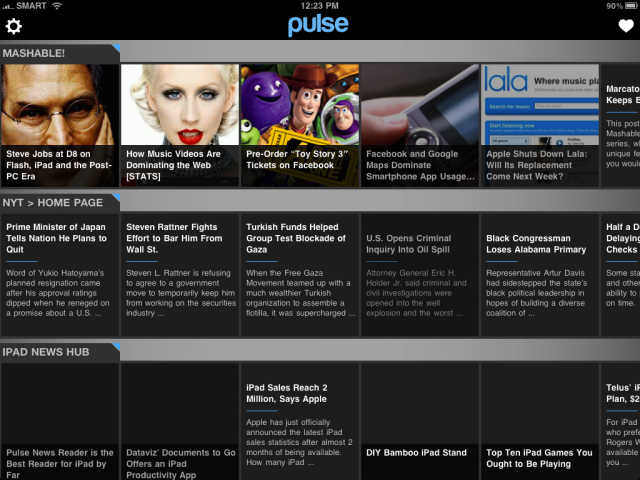 Bonus pro tip: Flavors.me. We wrote this up before, but you’re gonna want a sexyhot portfolio or resume website in seconds, right? Lots of Auto-ers have one already, like Rachel, Taylor and Alex, who are obviously on the bleeding edge of something here.