It’s Friday so you know what that means: another edition of Boobs on Your Tube! We’re less than a month away from the start of the Fall TV but we’re still here, covering the best (and worst) of queer summer television.

Fresh off her trip to Earper Homestead Con, Valerie recapped the latest episode of Wynonna Earp. We debuted our latest roundtable on the baddest queer bitches on television. Also? Heather shared the latest pop culture news, including some great Runaways scoop, but this came in just after she published: our first look at The Fosters spin-off, Good Trouble.

Carmen says the show looks “like The Fosters and The Bold Type had a LA baby,” which feels like an apt description. The show announced last week that Judicorn will make guest appearances on Good Trouble but no definitive word on when our favorite mamas will show up.

Riese has been following Harlots this season — it “got way more queer this season,” she reports — and she’ll have a standalone piece for you next week. Natalie’s looking into Burden of Truth, the Canadian legal drama with an adorable baby gay couple, that’s getting a second life on The CW this summer; she’ll report back soon. Here’s what else made TV gay this week. 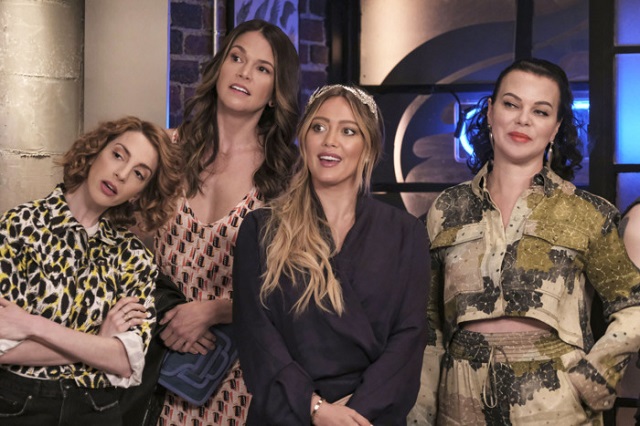 You know what is so weird to me about this season of Younger? The show goes to such great lengths to establish itself in the real world and to tackle the stories of the moment — they’ve made it plain #MeToo exists here — and to make it seem like The Marriage Vacation has made Charles such a household name that even Hoda and Kathie Lee know who he is. But! They’re not even brushing up against the fact that Charles and Liza together, in this fictional world set in this real world at this moment in time, would be a scandal of career- and company-destroying proportions! It’s a glaring omission this week when Marc St. James catches them canoodling on the UES and they pass it off like Liza just shimmied all the way up there, where Charles was eating a several course meal and enjoying a full bottle of wine alone in the dark, to drop off a manuscript? Come on now. This is Marc St. James, but as a publicist! That shit would have been trending on Twitter before midnight!

Either way, it causes big problems with Kelsey and Liza because the manuscript in question is one Kelsey passed on but Charles goes over her head and acquires it anyway. Liza ultimately and correctly tells Kelsey she’d choose her over Charles any day, and I honestly threw my hands in the air and cheered because by now Liza’s gotta know these men are temporary!

Speaking of someone else who deserves to be a staple, Maggie’s still with Malkie! They don’t have much screentime together but they’re there and I hope that means we’ll see them more. Maggie spends a little time attending Josh’s revamped tattoo shop opening and a little time serving sambuca to Liza and her daughter when Liza finally comes out about all the lying she’s been doing about her age and dating Charles. She does it because she doesn’t want Caitlin to be dating her professor and in the process she realizes she doesn’t want to be Charles’ secret either. They kind of breakup! Good! 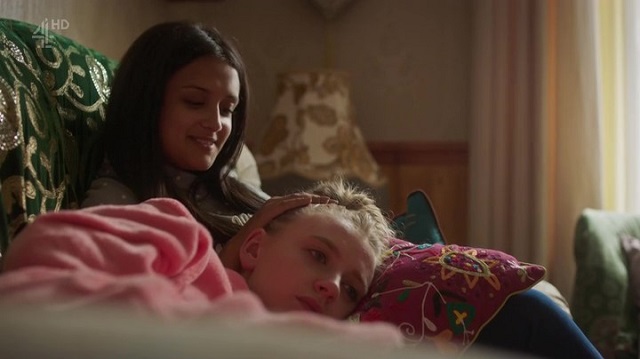 Missy Booth and her ride or die, Nas Paracha

This week’s episode of Ackley Bridge focuses on two separate, but intersecting, stories: Missy Booth reveals that she’s pregnant and starts to imagine a life for herself as a wife and mother, while Nasreen starts to consider life after Ackley Bridge College. The stories are irrevocably intertwined because Nas and Missy are best friends but they’re also tied together by a side effect of poverty: how hard it makes it to imagine a better life for yourself.

For her entire life, Missy Booth has had to accept what she’s been given. Her father’s never been there, her mother’s an addict and her nana’s gone and the only person she’s ever had to rely on is herself. Then she met Aaron, Nas’ half-brother, and things started to change: he loves her and wants to build a life with her and her sister, Hayley. But Missy can’t trust it — good things don’t happen for girls like Missy Booth — and she just keeps waiting for someone to pull the rug out from under her.

Desperate to hold onto the life she’s building with Aaron, Missy stops taking her birth control pills and ends up pregnant. Aaron’s shocked but feigns happiness in front of Missy and she decides to drop out of school and prepare for motherhood. Nas puts together the pieces about Missy’s treachery and chastises her for having done it. She doesn’t dream of a future beyond the streets of Ackley Bridge…between her, Aaron and the baby, Missy Booth has all the world she needs. Eventually, Nas lets the cat out of the bag about Missy having stopped taking her birth control pills and Aaron, who might be the most understanding guy on the planet, forgives her and sincerely embraces his future as a father.

Later Missy gets a glimpse at what her future could really be like when she runs into her mum at the grocery store. There’s not much to their interaction but you can see a shift in Missy’s demeanor…she doesn’t want this for herself and she doesn’t want her life for her child. When Aaron comes home (with a cute pair of baby booties), Missy admits that she doesn’t want to have the baby after all. Aaron’s upset — partly because he’d accepted the idea of being a father, but mostly because Missy didn’t bother to talk to him about the decision before he made it (her body, her choice, dude!) — and they split. Missy then turns to Nas to take her to the abortion clinic which, of course, she does without hesitation.

Meanwhile, Nas is dealing with a challenge of her own: thinking about what her future holds after she finishes at Ackley Bridge College. Mr. Hyatt, the school’s new biology teacher and Mrs. Paracha’s new boyfriend, has prepared a list of possible universities but Nas’ mom nixes them all and urges him to stay of out of her family’s business. 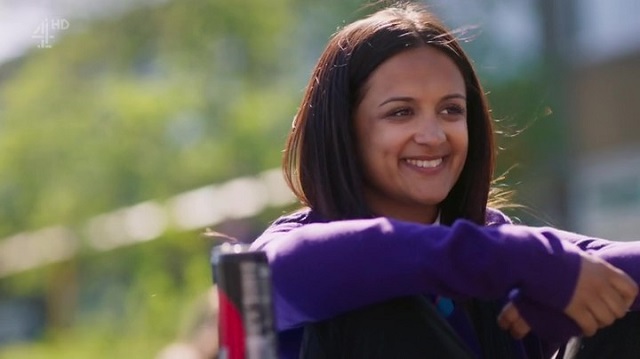 “I’ve got all these choices to make and I don’t know how to make them. I don’t know what I’m doing.” Same, girl, same.

“[Missy] can stay here in Ackley. You know where you are here. You know who you are,” Nas tells Sam the next day, trying to embrace the comfort that staying in town might provide, for her and for Missy. But then she concedes, “I don’t know who I am, where I’m going or what the hell I am supposed to do when I get there.”

Sam, surprisingly, urges Nas to stay in town, with her…which sounds sweet in that “aww, young love” kind of way, but is also the worst advice to give a girl like Nas in this situation. Later, when she’s sitting at home with her mum, Nas admits that she’s scared and that she doesn’t know what she’s doing. Mrs. Paracha relents and pushes her daughter to seek out Mr. Hyatt’s help, since she doesn’t understand anything about universities. As a mother, she wants Nasreen to stay, but she doesn’t want her to waste her gifts either…so Nas has to go somewhere.

Ackley Bridge hasn’t been picked up for a third series yet and, while I hope it will because the show’s storytelling — about some really challenging subjects — has been masterful, this episode forced me to start imaging this show without Nas Paracha (played by Amy-Leigh Hickman)…and, to be honest, it’s difficult to do. Even though there’s plenty of compelling stories to be told about the other students, including Nas’ siblings, and Ackley Bridge staff, Nas still feels like the heart of this show and I don’t know how they continue with her at University. We’ll see how they leave it in Tuesday’s season finale. 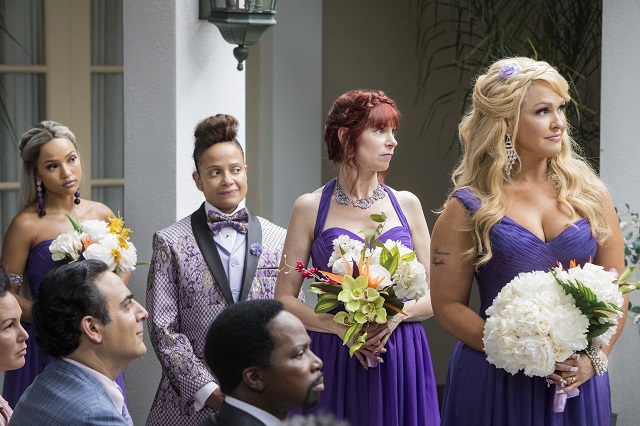 This episode was a mess but Ann in that tux, though?!

The second season of Claws came to a stormy conclusion on Sunday, as Desna got married to Gregory Ruval, only to end up subsequently killing him after he attacked her. Also dead? Gregory’s mama — a fitting end to their incestuous relationship, I suppose — and the season’s big bad, Zlata, the head of the Russian mafia. While I’m grateful to see that chapter of the show come to an end — my tolerance for anything Russian is at an all-time low — I was really disappointed in how things played out.

This show has always taken great pains to center the friendships between these working women and yet, in the finale, it was just Desna against the world. A few episodes after cementing the love and loyalty between Desna and Quiet Ann, the finale had Ann sitting at hotel bar, hitting on a bartender, instead of being near Desna to ensure that the plan went off without a hitch (spoiler alert: it didn’t). It didn’t make any sense.

So now, we wait for next summer to see how Desna, who is, inexplicably, now the owner of a casino, runs game in Palmetto…and if Quiet Ann (or Arlene) are there for the ride. — Natalie

Everyone absolutely hates the new Netflix show Insatiable. In all my time writing for the internet I have never seen a critical smashing of a show like this that actually made it to air. I started watching it because I figured there was no way it could be as bad as everyone was saying, and because there’s a lesbian character. Well, let me tell you, it is EVEN WORSE than what you’ve read. The best way I can describe it to you is: if you distilled Glee down to its most outrageously offensive and reprehensible storylines, that’s this show. Stay away from it if you don’t want to despair for humanity. — Heather 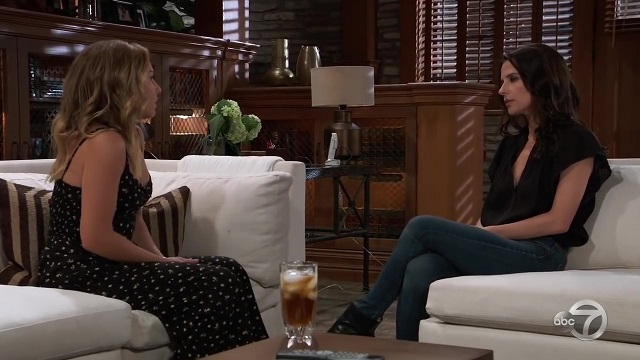 “Sister of mine, home again…”

Kristina’s back! The prodigal daughter has returned to Port Charles, after several months off-screen in Eugene, Oregon with her lady love (and former English professor), Parker Forsyth. She reconnects with her father — who’s grieving the loss of his would-be grandson — and then reunites with her mom and sisters. Kristina puts up a good front, saying that she and Parker are happy, but once they’re alone, her older sister, Sam, asks for the truth. Kristina admits that while Parker’s doing well and their relationship is okay, she feels like she’s drifting.

Meanwhile, we got to see Dr. Terry Randolph (played by trans actress, Cassandra James) in her scrubs. She and her childhood friend, Liz, run into each other at the hospital and chat about problems with Liz’s son and how Terry’s work is going. They’re interrupted by Dr. Kim Nero (played by the incomparable Tamara Braun) and they rush off to work on a project together. Color me intrigued. — Natalie