Big TV week, eh? Valerie reviewed the newest (gayest) season of Mindhunter. Riese and Carly released a new episode of To L and Back. Heather had some feelings about Steven Universe: The Movie. Meg made everyone cry with her Bachelor in Paradise finale recap. We unleashed our Fall TV Preview! We revealed the results of our Gay Emmys! Valerie got hyped for this queer teen drama called Trinkets. And Drew wrote about Gen Q releasing another teaser.

Announcements from the TV Team:

+ Reminder: the first of two (!!) forums with Democratic presidential candidates focused on LGBT issues takes place tonight! Presented by The Advocate, The Gazette, GLAAD and One Iowa, the forum will ask 10 contenders — including all the remaining female candidates — about the most pressing issues facing our community. The event will be hosted by Gay Emmy winner Angelica Ross and you can watch the entire event, via GLAAD’s livestream. — Natalie

+ Tonight is the series (!) finale of Killjoys and I am immensely sad it’s leaving us. Boobs On Your Tube couldn’t contain my feelings about this so I’ll be doing a standalone post for you soon so we can wallow in our sorrow together. — Valerie Anne

Why Women Kill 106: “Practically Lethal in Every Way” 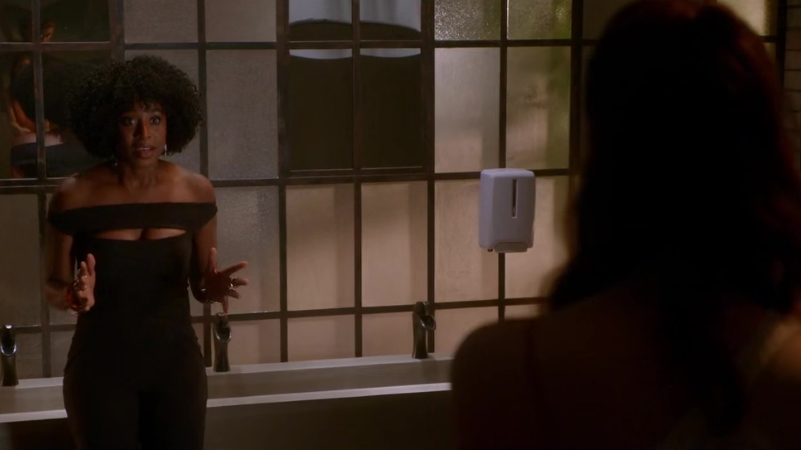 Kirby Howell-Baptiste in that jumpsuit, tho… *swoon*

Before Taylor returns from her trip, Jade approaches Eli — who’s just popped another Adderall to fuel his writing — about how they’ll tell Taylor that they slept together while she was away. Eli’s worried about Taylor’s reaction and tries to convince Jade to take their dalliance to the grave but she wants to be honest. Eli gives in — “anything less than full honesty is betrayal” — but when an irritated Taylor comes in, he changes his mind. Jade scoffs as Eli ushers his wife upstairs and into a bath.

Later, Eli steps into the kitchen, triumphant, having finally finished his script. After the women offer their congratulations, Taylor notices a new closeness between Eli and Jade and asks if they slept together while she was away. Eli stammers as he attempts to come up with a good lie but Jade interjects and tells the truth. Taylor admits that she doesn’t know how she feels about it and Jade reminds her that she and Taylor have had sex without Eli before. Taylor accepts this defense and concedes that whatever feelings she’s having are hers to work through, not theirs. Eli finally decides to chime in, taking credit for the decision to tell Taylor, much to Jade’s disbelief.

To celebrate the finalized script, Eli’s agent, Lamar, invites the throuple out to dinner. He touts the interest Eli’s script has gotten already and anticipates securing a high six figure deal. Lamar touts Jade’s contributions to the script and dubs her Eli’s muse. Hurt to learn that Eli’s given Jade access to his writing that he never gave her, Taylor retreats to the bathroom. When her absence is felt, Jade follows Taylor into the ladies room, assuming that she’s upset over the sex with Eli.

“Jade, believe me when I say I don’t give a fuck if you screwed my husband,” she assures her girlfriend. Taylor steps out of her stall and laments Jade being given credit for Eli’s success when she’s spent the last two years saving Eli (and their marriage) from himself. A drug habit nearly killed him but Taylor forced Eli into rehab…and now she’s an afterthought. Taylor worries that, however unintentionally, Jade’s presence has exposed the faults in their marriage. Taylor doesn’t think their current living arrangement is working anymore, leaving Jade visibly panicked.

At home, Jade confronts Eli about not telling her about his addiction. She wants to tell Taylor about the pills but she’s worried it’ll hasten the end of their arrangement. Eli assures her he’s done with the pills so there’s no need to tell Taylor but when Jade asks for them back, he’s reticent. Eli doubts he can be good writer without his addiction and begs Jade for the pills. Once he sells the script, he’ll be flush with cash and he promises Jade that he’ll take care of her. She gives the pills back, after making him promise again to take care of her…and, honestly, it’s all a bit scary….but rather than confronting her, Eli takes comfort in the throes of his addiction.