Hello, you raindrops on roses, you whiskers on kittens! It is time for your weekly round-up of all the queer lady things you maybe missed on the television! You probably have noticed that nearly every show on TV is in the throes of its midseason break/winter hiatus. I actually had high hopes for TV this week because Jane the Virgin aired its midseason finale, and I was jonesking for some Luisa vindication (she got tossed in an asylum two weeks ago, you’ll remember), but she did not make an appearance. Marry Me didn’t pony up a Christmas episode, so there was no new Kay for my eyeballs/thirsty heart. And Jane only had like two lines in The Comeback. So basically it was a desert this week, y’all. A snow-covered candy cane dessert.

But there were a few things to celebrate, and these are them. 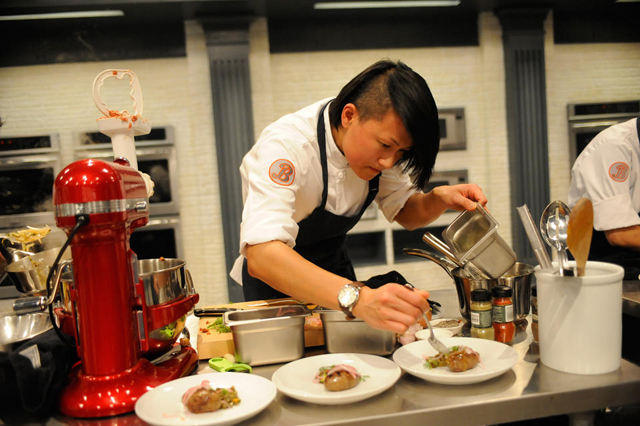 It’s getting down to the nitty gritty on Top Chef. This week, only six contestants remained: two women of color (one of whom is gay), two men of color (one of whom is gay), and two white dudes. The Quickfire Challenge was to make sausages for New England Patriot Rob Gronkowski, a guy my girlfriend hates because he plays for the Patriots and a guy I hate because he destroyed my in fantasy football this year. But my g-d, Padma could not stop flirting with him. She made so many sausage/dick jokes I thought Melissa and Mei were going to roll their eyeballs right out of their heads.

In the end, Melissa and Mei’s sausages were too dainty for Grink, and George, who only rejoined the competition last week, won immunity for making a plate-sized sausage patty for him to gnaw on.

The Elimination Challenge was actually one of the best ever. Each of the chefs had to take inspiration from a New England-based poet and translate their work into food. Gregory, who really really got Edgar Allen Poe, made a Raven-inspired dish that the judges didn’t love. Mei chose Thoreau and went with a vegetarian dish that looked exactly like Walden Pond in the snow. Melissa went with Hawthorne’s The Blithedale Romance, and created a halibut/vegetable plate that made the judges lose their damn minds. Dougie found his inspiration in Emily Dickinson’s classic line “Bring me sunset in a cup” and created a masterful carrot bisque. And dumb George did a literal one fish, two fish thing for Dr. Suess. But it was Katsuji who lost it for himself by making a Carrie-inspired Stephen King-ish dish that featured beet blood splattered everywhere.

So Melissa has made it to the final five, you guys. The show returns on January 7th. 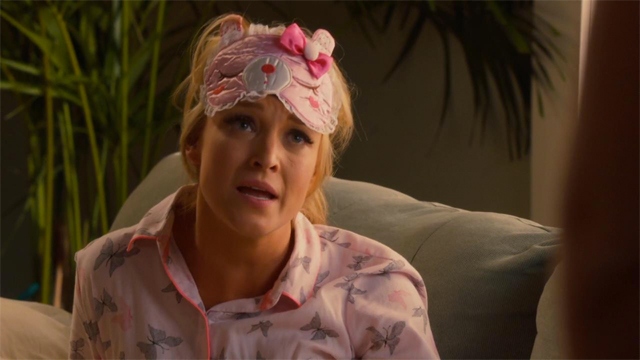 The CW and ABC Family have two wonderful things in common: 1) When other networks go on break, they step up their game with new programming. 2) If you wait around long enough, at least one of the main characters on whatever show is going to come out as gay. That second thing happened on the Hart of Dixie season three finale. And last week, when every other network put on the breaks, The CW unleashed season four of My Grandma’s Favorite TV Show.

How it happened was: Cricket was dating a guy named Stanley that everyone thought was gay, but she was planning to marry him in the season three finale. Their wedding was meant to take place with two other Belle weddings. But in the middle of her nuptials, she shut the whole thing down, saying she could not lie anymore, that she is 100 percent gay. It was quite the scandal!

Cricket was around for a few minutes of the season four premiere, mostly to say that she refuses to leave the house until she finishes watching all the seasons of The L Word, which she has deprived herself of, lo these many years of pretending to be a straight southern belle. You want to reach through the screen to stop her, but she’s about to pop in the first DVD of season five, so she’s made it through the worst of it and is about to be rewarded with Jenny Schecter’s best season ever, and also Bette and Tina doing it all over the place. So you just let her have her moment.

Annabeth tells Cricket she was really courageous for coming out, although maybe next time she could time it a little bit better.

Hart of Dixie will be back on January 9th, and I’m hearing that Cricket is going to be way more involved this season!

+ Fan Fiction Friday: Get Sprung With 9 Orange Is the New Black Stories

+ Ready Or Not, The Final Season Of Glee Is Coming For You

As far as I can tell, there won’t be any new gay lady content on TV next week, but if something pops up, I’ll let you know! Happy Holigays, bright copper kettles!