I am going to spend this weekend watching the new season of Grace and Frankie. What are you going to do? Rewatch Queen Sugar, I hope, because we finally have some writers to write beautiful things for you about this beloved show! Also, your prayers have been heard and Valerie Anne has written about Humans for you; look for that on Monday. Also, guess what else? Wynonna Earp is back and filming season two!

Also, Orphan Black has wrapped its series, which is sad, but also that means the final season will be upon us soon with ten more brilliant episodes. And Rosewood comes back next week. Until then, these are the TV things we published that I hope you read this week:

+ Supergirl Episode 216 Recap: I Don’t Need a Prince to Save Me

And here’s what else. 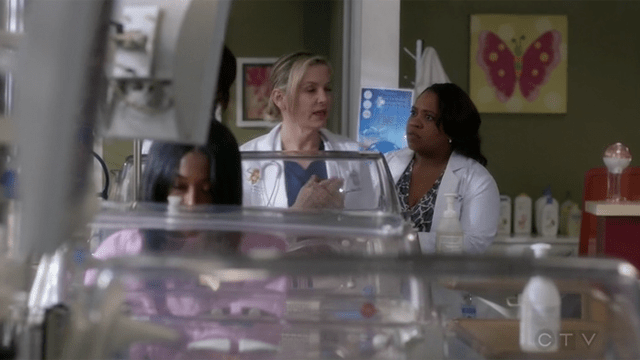 If Meredith had heard her take Yang’s name in vain like that, shed’ve murdered her dead.

The best thing about this week’s Grey’s Anatomy is Bailey hovering in the background and swooping in to meddle. First of all she does it when she finds out Arizona and Webber are fighting. She flits around behind Arizona while she’s making her rounds, trying to get her confess to her crimes, and when she does, Bailey is beside herself with glee. Arizona snaps, “You gave away his job.” And Bailey grins, “And you put your mouth on the person who took it. Mine was a business decision.”

Arizona and Webber finally talk it out and he says he thought she was on his team and she says she is — she didn’t expect to want to put her fingerbang on his competition! He takes a dig at her love life, but she calls him out for just being mean. He only keeps up the tough guy act for a second before relenting and agreeing that his feelings are just hurt. He’s going to get over it; he just needs a little time.

The next time Bailey swoops in is when Owen and Amelia start in on each other in the hallway about babies this and who’s messed up worse that. Bailey’s frankly fine with it until Amelia invokes the name “Cristina Yang” right out loud for all the world to hear. That’s when she swoops in and nearly snaps their necks, but reaches deep for her benevolence and banishes them off to the stairwell instead.

I don’t want to talk about the cases of the week. They’re too sad. Cancer, of course, but also the death of a woman who was married to and still in love with her husband after SIXTY YEARS. Seattle Grace Mercy West has honestly never even heard of such a thing. 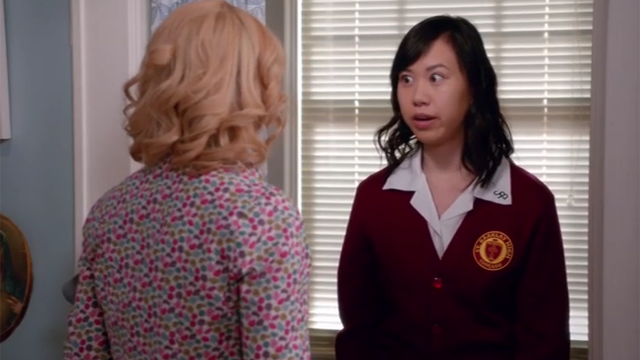 I’m homeless but at least I’m not being written by Ryan Murphy.

Allison and her goldfish, Catfish Everdeen, moved in with The O’Neals this week, claiming her parents’ divorce at first but finally admitting they kicked her out because they found out she’s gay. No, she didn’t come out to them. They read her Jennifer Lawrence blog. And also saw her kissing her girlfriend. Eileen isn’t feeling it. Allison weirds her out and keeps startling her so much she throws punches Allison blocks with her (literal) catlike reflexes. Plus she’s eating like two boxes of frozen waffles a day. Eileen finally cracks and decides to let Kenny keep his lesbian when she overhears Allison’s parents say they’re sending her to conversion therapy. She also steals their pie as punishment.

I could’ve done without the overbearing Asian parents get schooled by middle American white mom thing. And I can continue to do without the thing where Allison is only in on the joke half the time. I am excited to see Allison more regularly, though. She’s very funny in a Luna Lovegood and Dara Morgendorffer’s lovechild kind of way. 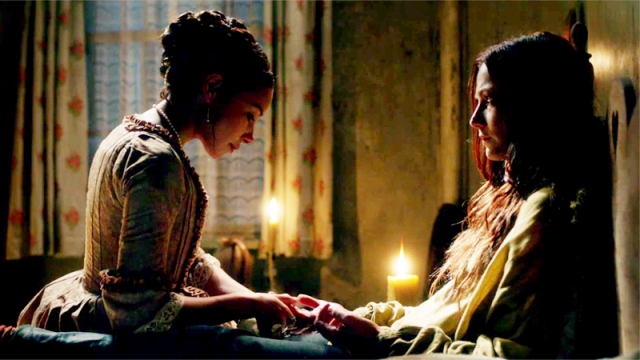 Eleanor is still dead. The episode after she died they made me look at her dead body for a solid five minutes. All while her stupid husband whose stupid fault it is she’s stupid dead was sitting there wallowing in his manpain. It was awful.

However, in this week’s episode, Max honored Eleanor’s memory in a few ways. First, she met Eleanor’s grandmother. Mustachio Jack went to talk to Grandpa Guthrie originally but soon learned that the Guthrie apple didn’t fall far from the tree and it’s actually Grandma who is secretly in charge. Jack, being one of the only men on this show who didn’t constantly underestimate the women (probably thanks to knowing Anne so well), knows his chances of getting through to Grandma would be better if he brought another woman who knows how to pull the strings behind the scenes was with him, so he brings Max with her.

Grandma is impressed by how far Max has climbed over the course of her life, and it’s clear she’s taken with her. Max goes to dress Anne’s wounds and tell her that she’s close to making a deal that would help them unseat the Governor, but Anne doesn’t want to hear it. She growls at Max for talking about the future like they’re in it together. She was glad Max didn’t give her a bullshit apology, but Anne says what they had is broken, and she’s not sure it can be fixed.

Max leaves, sad but not wanting to push Anne out of her comfort zone, and our old friend Idelle walks in. She says that Anne killed her friend Charlotte, and Idelle hates her for it. Wanted to have her killed, even. But Max wouldn’t let her. Idelle says Max has fought tooth and nail every day of her life, and despite having reasons to give up every day, she never does, and she fights on, and she might even win. And even though Idelle makes it clear she doesn’t understand why, Max wants Anne to be by her side when she does.

Later, Anne finds Max sitting outside in the snow. Max says she was offered the deal from Grandma Guthrie, but she said no. Anne sits down, perplexed. Max says Grandma Guthrie’s final step in the plan for a partnership to take over Nassau was to marry Max off. Grandma had assured her she wouldn’t have to sleep with her husband, he would just be the puppet, the face, she’d still be the one in charge, but she’d be married to this man she doesn’t know.

Max tells Anne that she has been in awe of Eleanor since the moment they met. The way she talked, the way she carried herself. She learned from her strength and her cleverness, even as she loved her. She learned for her weakness and her mistakes, even as she fought her. But in what would be Eleanor’s final days, when they were brought together by a common enemy and a common goal, Max realized that there was final lesson Eleanor had to teach her. Eleanor regretted not leaving with Max. Or at least was having second thoughts, wondering what could have been. Grandma Guthrie asked Max if Eleanor was happy, and Max’s face twisted up, perplexed, and she asked, “Happy?” like it was a word in a different language. Max doesn’t want to wonder, she doesn’t want to have regrets, she doesn’t want to make the same choice Eleanor made. Max is seeking out happiness in people over happiness in Nassau. Max is choosing love over power. Max is choosing Anne. 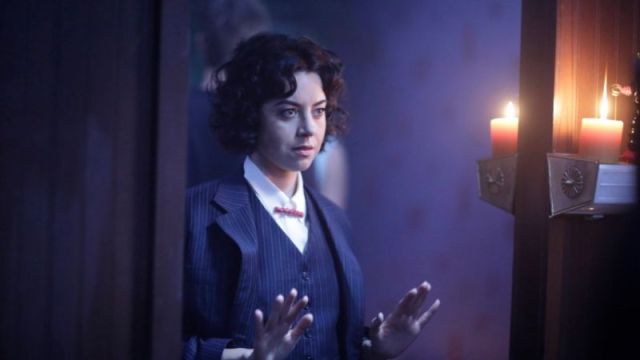 Leslie said it’s a Come As You Were in the ’90s Party.

Nothing gay happened on Legion but known bisexual Aubrey Plaza is going to get nominated for an Emmy for this thing and so Valerie wants you to know about it. This show is weird as hell and I don’t know how to explain it without spoiling it for you so what I’ll say is that Plaza plays Lenny “Cornflakes” Buster, a mental institution patient who turned into a phantom and then turned into a therapist. That’s bonkers enough, but what makes her role truly special is it was written for a middle-aged straight white dude. When Plaza got the part, she insisted they keep the role exactly the same, so there’s a brilliant androgyny to both the way she dresses and the way she acts. When you watch her work and you think about who the role was actually written for, you’ll get a subversive chill of delight right up your spine. Unsurprisingly, Plaza told Vanity Fair she prepped for the role by thinking a lot about David Bowie. 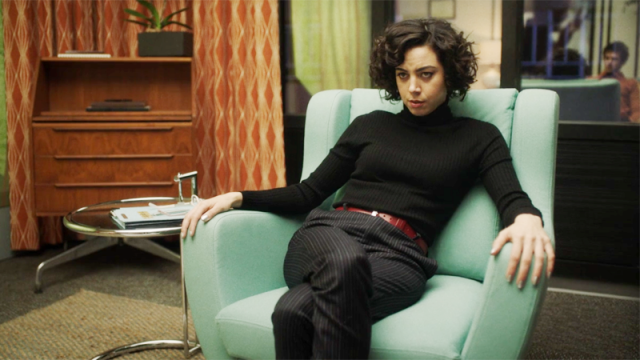 So, you know, put this on your radar. People keep comparing this role to April Ludgate, and Merlin knows I loved April Ludgate, but there’s something so dark and charged about Lenny that Plaza is just alive.