Previously on The Fosters, the moms getting remarried and making out in the rain and that’s all we care about amen.

Sadly, we have not seen the last of the #JusticeForJack t-shirts. Callie and Daphne are wearing them while collecting signatures for their petition outside a supermarket. Daphne tells Callie she is stupid for running around like Nancy Drew and then puts one of the Girls United girls in her place when she complains about community service. Can we just have Daphne follow Callie around and smack her in the head when she tries to do something stupid? (Editor’s note: I second this motion.)

Lena’s running through flash cards with Jesus. He’s fine when she shows him the pictures but it’s no good when she asks him to read a word. He can’t read. He didn’t tell her earlier because he doesn’t want more tests and therapy, he just wants to be better. 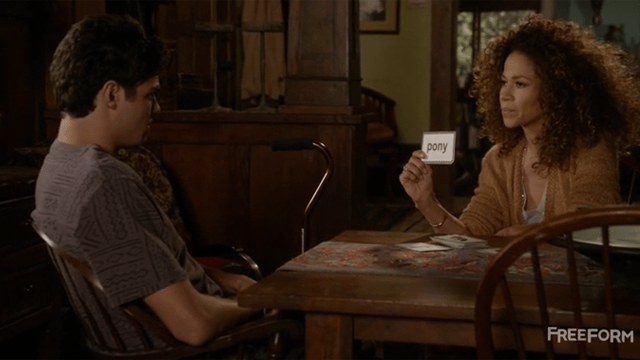 Pony, from the Latin word Equus, also the name of a play starring Dan Radcliffe. 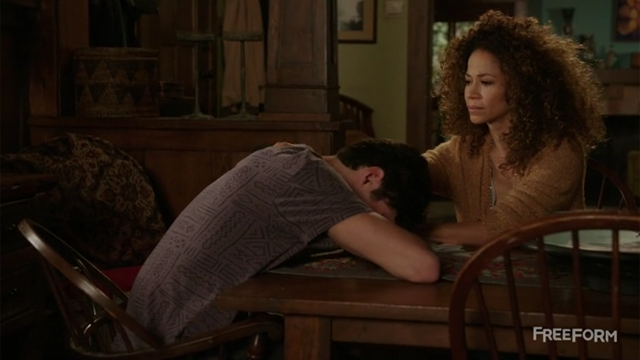 Heather Hogan’s course on making everything about Harry Potter in five steps or less is really taking a toll on you, huh?

It’s Stef’s first day working in human trafficking and she meets Diamond, a fifteen-year-old who ran away from her foster home. The cops want her to get away from her pimp but Diamond doesn’t care what they want. Stef offers her card (which weirdly says Stef Foster) to the girl and also a side-helping of Mama Stef. See, Diamond, she knows about teenagers because she has five of them at home.

Jesus’ has new Maddow glasses that are supposed to help him re-learn how to read. Brandon tells him he looks like a Minion. Dude, why you gotta be this way? Mariana calls him a jerk but if this show wasn’t on basic cable the description would be much more colorful. Emma texts Brandon to ask if he can get the letter back from Jesus so he scurries off to do that while Lena gets yelled at by Monte and Douchey Drew about letting kids without permission slips take the sex ed class. 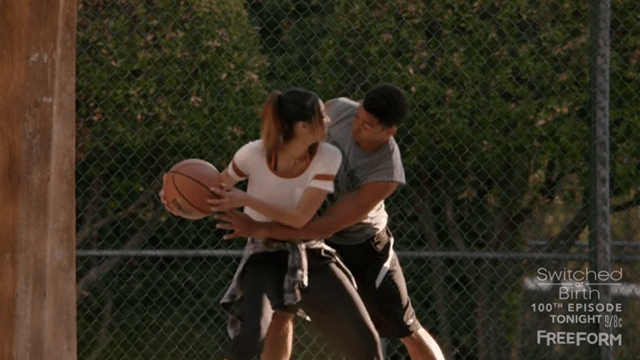 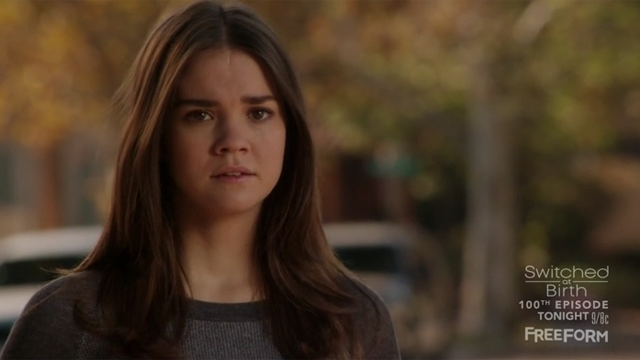 Callie stops by the basketball court in time to see AJ and Ms. Cinnamon Buns (what’s her name again?) recreating scenes from Love & Basketball. When Callie tells Mariana what happened, Mariana is ready to kick some ass on Callie’s behalf, even after Callie points out that when Aaron kissed her it didn’t mean anything. Maybe AJ just needs to be reassured that even if Callie is headed to some dungeon forever, she still loves him. Or something.

Lena is worried she’s going to lose her job or not get her contract renewed courtesy of Monte and Drew who are probably hooking up. Oh Lena, that escalated quickly. Sure Monte has shown some terrible boundaries in the past but that’s a little much. Stef thinks everything will be fine because Lena is heaven and they are on their second honeymoon phase. Stef, babe, when has anything just been fine on this show?

Mariana wanders into Jesus’ room where he is drawing with his glasses on. He still hates them but she steals his drawing and it’s of a tree house like in the Magic Tree House series. They used to read them when they were little. He wishes for a tree house so he could go back before all this stuff happened. Aww, this is kind of sweet. Am I the only one who likes his glasses? I think they look good. 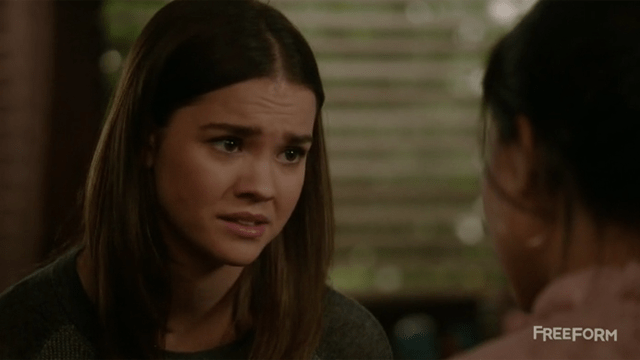 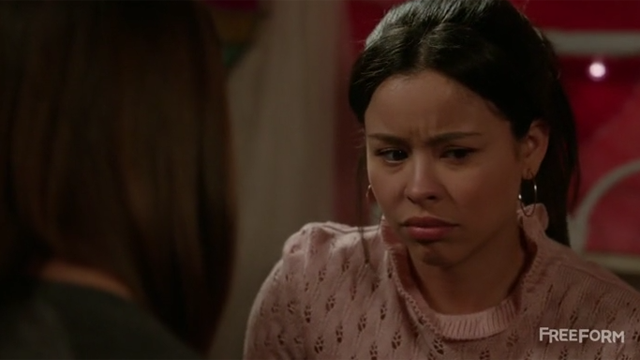 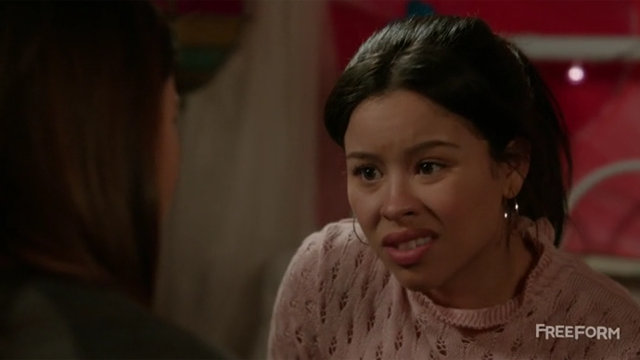 Mariana, ever the girl with a plan, heads for Stef and Lena, armed with Jesus’ sketch book. He can start his senior project early, making a tree house with Gabe as his supervisor. If he makes it in a park he can apply for grant funding and voila, everything is perfect again. Oh Mariana, you shining light in a pit of despair.

When AJ gets home, Mike is ready to ask if he wants to be adopted. AJ says he knows it’s all because MIke wants to move in with Ana and offers to go live elsewhere so he’s not in the way. Mike assures him that he wants to make their family status official. AJ explains how Ty wants him to move in with him once he’s out of jail, and AJ can’t say no to his brother. Mike is about to leave for work when he bumps into Callie so he lets her in to wait for AJ to be done showering, which definitely seems like legit parenting. Callie has a horrible idea of getting naked and surprising AJ in the shower. He is not into it so she heads back to her clothes, mortified.

They talk when he gets to his room. She apologizes for being so wrapped up in trying not to go to jail and he tells her about not wanting to be adopted. He doesn’t want to hurt Mike or Ty and she reminds him of how she had to hurt Robert when he showed up but that he’s okay and Mike will be too. They decide, like teenagers, not to let the empty apartment go to waste and get busy.

Mariana catches Brandon rifling through Jesus’ desk to find Emma’s letter, makes fun of his shirt, and leaves him with a burn about how pissed Jesus is going to be when he learns that Brandon knew all of this all along. Mariana for MVP. 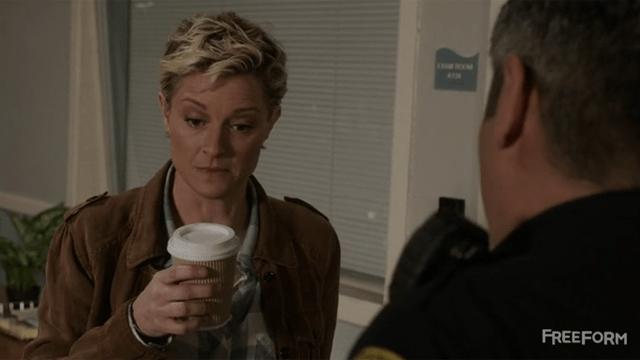 Kara is too good for Mon-El. 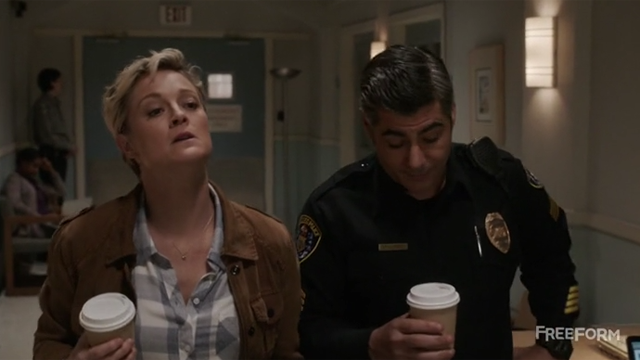 SHE’S TOO GOOD FOR HIM.

Mike called Stef because he was the officer who responded to Diamond getting assaulted by a john. She cries as she tells Stef what happened and then asks for helping getting away from her pimp. Stef promises to protect her. Diamond says she’s not safe anywhere because Russell has gang members in juvvie who will jump her if they think she’s going to go against him. Stef’s face makes me think the Adams Fosters are about to have another kid at home.

Stef and Mike trade parenting stories, AJ doesn’t want to be adopted, Stef wants to kick his ass for kissing a girl who isn’t Callie. The usual stuff.

A bespectacled Mariana leads Jesus through the school hallway. He’s embarrassed about his glasses and helmet, especially when he runs into his wrestling buddies. But Mariana is undeterred. A tiny force of nature, that one. Jesus stutters when he asks Drew to let him build the tree house and Drew gives him kind of a sad look.

Stef shows up with Diamond to the supermarket where Callie and Daphne are getting more signatures. Looks like Diamond is going to have a spot in Girls United. 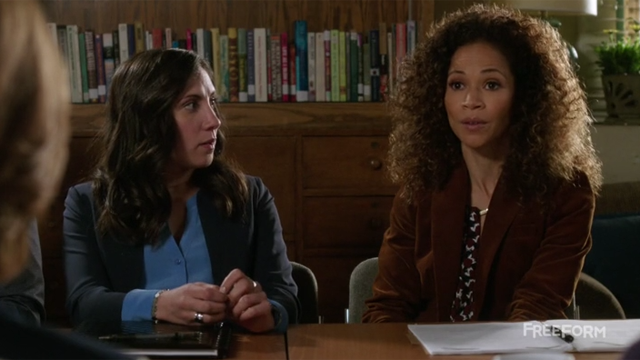 She did try to be gayer than my wife. 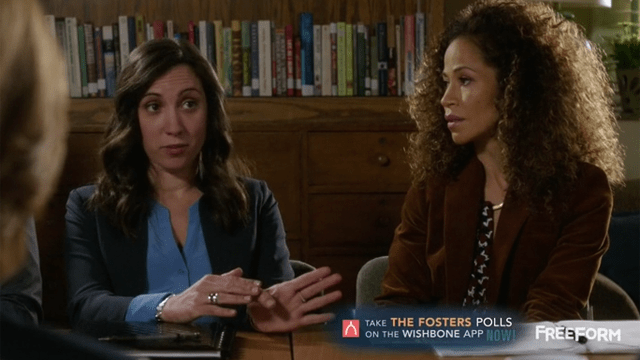 But then when Stef got that haircut I was like, “Give it up Monte.”

Lena pops into the accreditation meeting that Drew tried to leave her out of. But, instead they start with a quick chat about the LGBT sex ed class and the board had a complaint and they want Monte to resign. Ugh. Monte was being a twit about all of this but come on!

Back home, Stef and Lena have a glass of wine and talk about the fact that maybe it’s time for Lena to be principal. Oh Stef, she doesn’t want to win the job like this so you’re going to pack those fantasies away for another day, kid. Callie bops in wanting to know who Diamond is. Stef only says that the girl is a good kid who could use someone to look out for her (kind of like season one Callie. Well, all seasons Callie). 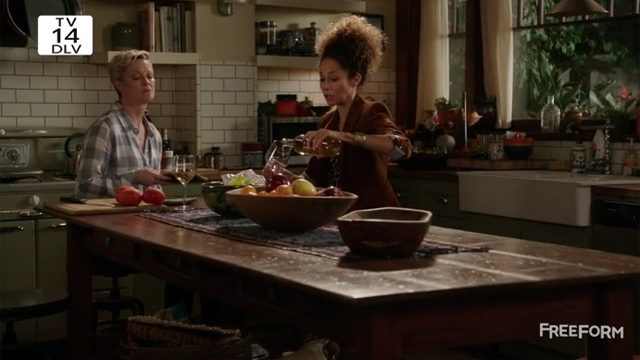 No, not wine. We’re drinking straight Scotch from now on.

Mike has an idea to help AJ: Ana and Isabella move in down the hall, then when Ty gets out, he and AJ take the apartment and Ana moves in. Mike can help with the rent for a while because he’s been saving the money the state sends for fostering AJ. AJ loves the idea. Mike, you’re kind of sweet sometimes.

Callie and Diamond are trying for some more signatures. Callie tells her how lucky she is to be in GU. Diamond, in a nice call back to the pilot, says “Stef’s a lez?” With swagger like that, how can you be surprised? Callie just reminds her how lucky she is and that Daphne is good people. 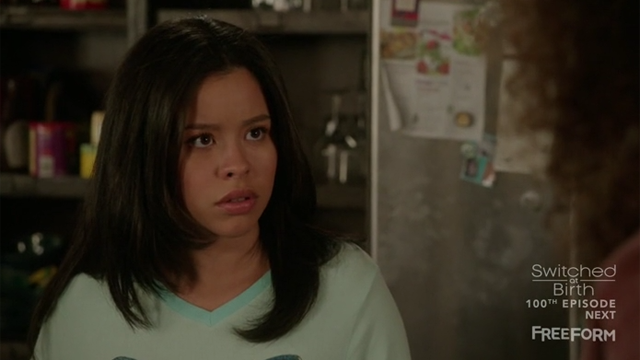 Look, am I your favorite child or what. 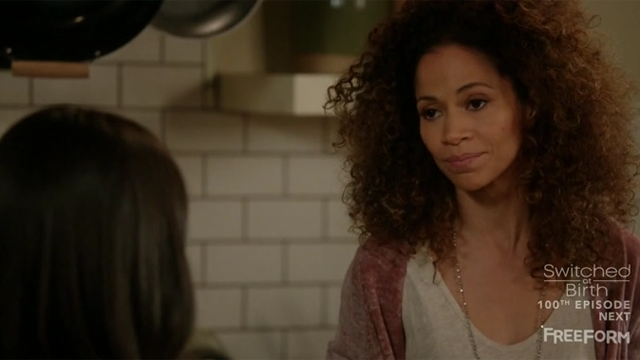 Mariana, you can’t ask a mother to choose between her children. 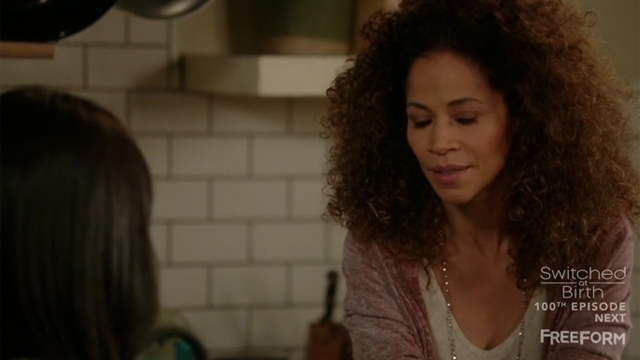 Lena tells Mariana that Drew isn’t going to approve Jesus’ project because they don’t know if he is even going to be a senior or if he will be at Anchor Beach. Mariana feels terrible for getting his hopes up only to let him down. So, she doesn’t. She tells him that the project is approved, if it’s both of theirs. She presents him with one of the books they read as kids. He tries to read it but gives up and asks her to read to him. It’s very sweet to see the two of them snuggling and reading. Later, when she tries to call Gabe his number is disconnected.

Diamond steals Callie’s phone and then asks to go to the bathroom. Callie offers to take her and Diamond calls Russell. He tells her that if she wants to get back in with him she has to bring him one of the girls from the group home. Back outside, Stef pops in and talks to Diamond about testifying against Russell and she agrees before heading over to try to convince another girl to come meet her boyfriend. KNow what this show needs? More sub plots. Nopety nope.

One of the board members comes over to have some tea and tell Lena all about how it was Drew who told the board about the sex ed class. He’s going to be interim principal now, so sabotage works and another white dude gets what he wants over a more qualified woman. 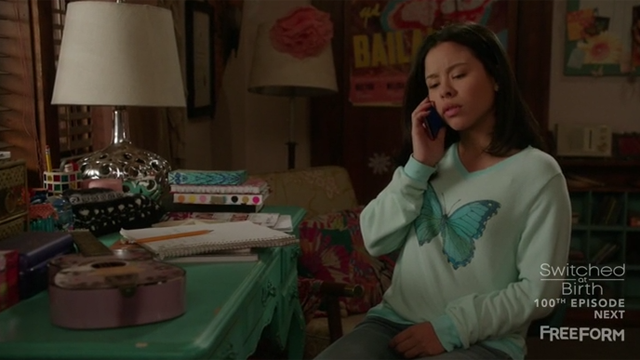 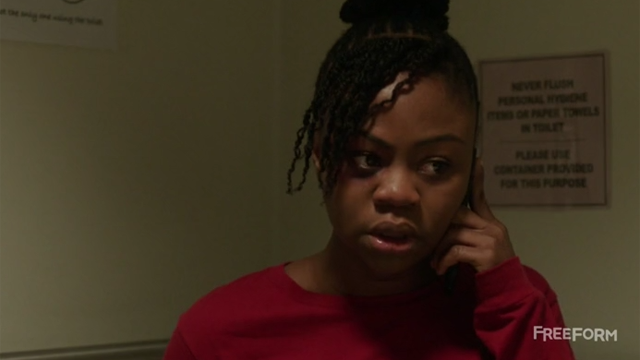 I think I have to go live with a Kara/Mon-El shipper.

Callie finds AJ at the basketball court (I almost wrote “court” but on this show we’d all assume there was a black robe and Judge Judy up on the stand) to show him how sporty she can be. He admits to kissing Dawn and that he likes her. It’s easy with her, not hard like it is with Callie. Oh man, AJ. This feels shitty, but Callie is a giant handful of nonsense. Hard to blame the kid for wanting something easier.

Lucy Hallowell lives near Boston with her family. She is a writer whenever she can find five minutes of peace. She is proud to say she managed to ignore her children long enough to write a short story called Dragon Slayer. She has been called a mule on more than one occasion but insists that she simply likes the high ones. Twitter, Tumblr

Lucy has written 12 articles for us.