It’s Friday and that means it’s Boobs on Your Tube! It’s been a slow queer TV week as summer winds down and fall TV peeks its head around the corner. Valerie recapped Wynonna Earp this week and Kayla recapped The Bold Type finale and Riese recapped the Ruby Rose Batwoman shenanigans! In movie news, Heather reviewed The Miseducation of Cameron Post and Kayla reviewed The Spy Who Dumped me.

Everything else this sloooow week is a Quick Hit!

.@LenaWaithe explains why she cut her hair: "I felt like I was holding onto a piece of femininity that would make the world feel comfortable with who I am" #HFPA pic.twitter.com/GTlxZJ11uO

When Lena Waithe debuted her new haircut on Instagram last month, it was a ripple heard across the queer internet. Fangirls (like yours truly) swooned, others nodded to themselves and smiled in subtle recognition. As her star keeps ascending, Lena Waithe has been nothing if not true to herself and open in her willingness to let us see ourselves in her, so this felt like another chance at recognition. Fun weekend fodder perhaps, but not much more.

Last night Natalie messaged me a simple all caps “YO!” with a link attached to Lena Waithe’s red carpet interview with Variety and I knew – our ripple had turned into a wave. Then Lena said, “I felt like I was holding onto a piece of femininity that would make the world feel comfortable with who I am.” Just like that, the wave was a tsunami.

One of the hardest parts of being gay is working through the messy, internalized, biases that we’ve been taught. And we don’t talk about it much, the little voice in our head that polices us. That tells us that we can be gay, but you know, not one of those gays. Maybe that voice is our mother’s, maybe it’s a pastor at a church, maybe it’s some asshole late night comic who went for a cheap laugh that one time. Whatever the source, somehow, that seed gets planted. And you or I spend the rest of our lives trying to uproot it. In this vulnerable moment, Lena Waithe is one of us. She gets it, “I thought for a long time that if I cut my hair I’d be a ‘stud’ or I’d be a ‘butch.'” And then I said, “Oh I have to put that down. Because that’s something that’s outside of me.”

Even Lena Waithe – Emmy award winning writer, multi-hyphenate actress/ producer, red carpet darling, all around queer butch badass – was afraid that by taking this leap, she would be taking up too much room. That by openly marking her queerness with a hair cut, she’d make too many people uncomfortable. That somehow their comfort was her responsibility at all to begin with.

Hair is another layer of complicated when you’re a woman of color, right? When you’re black. When your hair has been tamed by your grandmother’s hands, your mother’s hands, an auntie’s, your hair dresser. When it’s called your “crown and glory.” When your curls and kinks and the smell of coconut oil, shea butter, and Luster’s Pink Lotion are more than a sign of your womanhood – they connect you to your past, they pull you to your ancestors.

Last night Lena Waithe walked the red carpet in a brown suit, without a stitch of make up, and a flawless fade personalized with a side swoop. And you know what she had to say about that?

Listen, do you know how hard is it for me to recap Claws and not just make every single post about Niecy Nash in her jumpsuits? Yes, I’m a professional TV critic but, also, I’m only human. So, in lieu of a recap this week — it was a very light episode for Quiet Ann — I offer you this: 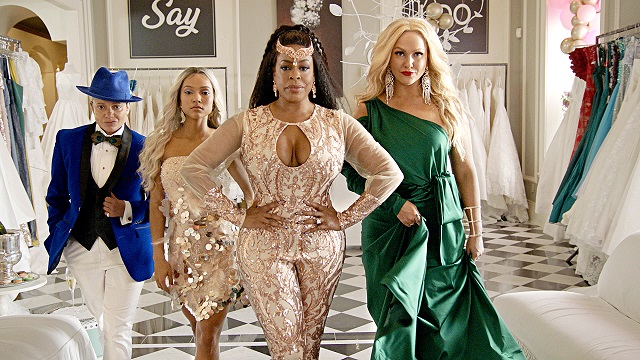 My friends, real friends, better than your friends.

Naveed Haider first stepped into the world of Ackley Bridge when Kaneez Paracha found him — on the Internet, showing off his ice skating skills — and thought he’d be the perfect partner for an arranged lavender marriage with her newly out daughter. For a while, Nasreen and Naveed kept up the charade, but ultimately, Nas ended their engagement, opting to search for true love instead. Still, though, the pair remained close, creating their own two-person LGBT support group. 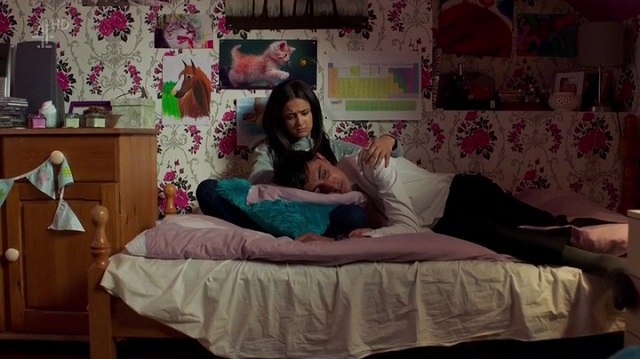 When they’re back in school, Nas approaches Naveed to apologize for outing him, however unintentionally, but he assures her he’s fine. Sure his mom pretty much disowned him and he had to leave his home, but he got to hook up with the heretofore straight boy he’s long had a crush on, so everything’s fine. Nas tries to persuade Naveed not to invest too much into this thing he has going on with Cory, but Naveed’s crushed that she can’t share in his happiness. Later, he returns back to Cory’s, ready to U-Haul, only to find that he’s already hooked up with someone else (a girl this time). Naveed runs to the Paracha’s house and Nas comforts him as he cries.

I won’t give away how the episode ends but, boy, did I love it so much. Also? Kaneez Paracha got herself a boyfriend, which after dealing with a trifling husband and being the best mom ever, she totally deserves. — Natalie

It’s been a while since I checked in with our favorite girls from the Cobbles, Kate and Rana, but things in the interim have been… not great… as the Connors grapple with the fallout from Kate’s brother’s suicide and custody of Kate’s niece, Susie. This week, the hits keep coming for Kana, as Rana’s father collapses during his 60th birthday party… a party to which Rana wasn’t invited, given her continued relationship with Kate. When she arrives at the hospital, Rana’s mother refuses to let her see her father. 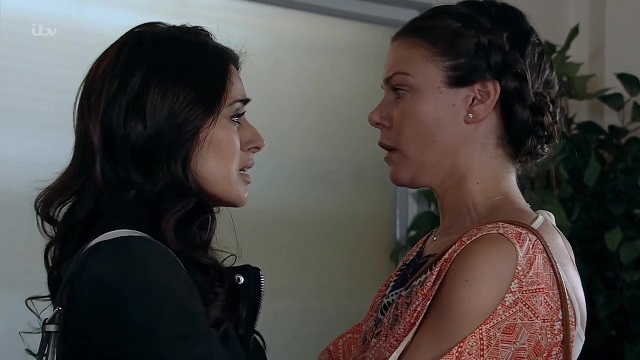 When Rana’s mother spots Kate comforting her girlfriend in the waiting area, she yells at them both to leave but this time Rana fights back, reminder her that because of her parents’ bigotry, Rana — a trained nurse — wasn’t at the party. Had she been there, Rana says, she would have recognized the symptoms of a stroke and gotten him medical attention right away. If her father dies, Rana yells, it’s her mother’s fault.

When she crosses paths with her mother again, Rana apologizes but her mother uses the opportunity to turn the blame back around on Rana. — Natalie

Ashly Burch’s character Keg has been flirting with resident disaster lesbian Beau for a few episodes, and I don’t want to spoil anything for you, but let’s just say it… pays off in this live episode. Also Marisha was wearing rainbow suspenders and it was the most. And for all my fangirl screaming, I do love this show for queering up D&D so publicly and unabashedly. — Valerie Anne

Queen Sugar 311: Your Passages Have Been Paid

You know those memes and internet jokes about being the “gay aunt” at the family dinner table? We all know that “gay aunt” is shorthand. The gay aunt is the rebel, she’s maybe the black sheep, she’s undoubtedly cooler than her siblings. This week on Queen Sugar Nova got to spend time one-on-one with her teenage nephew, Micah. And let me tell you, she’s the kind of aunt that I hope to grow up to be. She’s reflective, she listens. She helps him learn how to love himself and his people and his community. She wants Micah to be a better, stronger activist. To learn how to fight back with his smarts, instead of brute strength. And in doing so, Nova realizes that she has some growing of her own left to do. The editors on her book left copy notes that there wasn’t enough of “Nova’s story” in her own writing. She’s been too willing to shine the spotlight on others instead. She’s scared of letting loose the skeletons in her closet, but I think that’s finally changing. There’s two weeks left for Queen Sugar this summer – let’s see if they let Nova stick the landing. 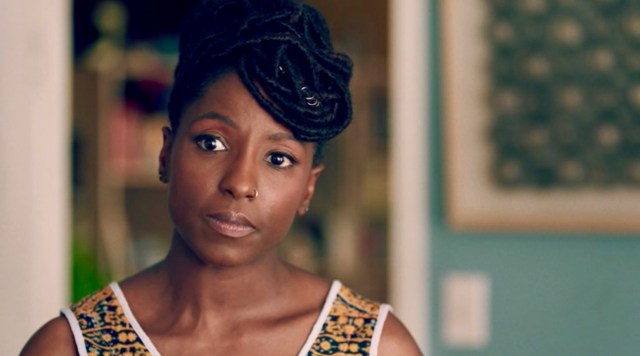 And friends, she was not wrong.— Carmen 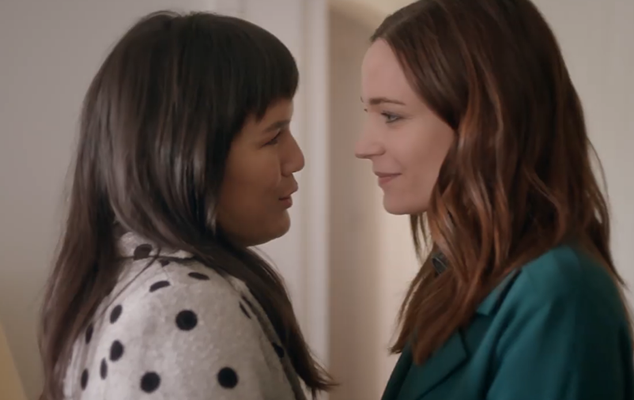 I really like the Facebook Watch show Strangers. Season one was good fun and the season two premiere had a lot of promise — and I’m here to tell you that if you’re casting around for something to watch during this regular TV season downtime, you might want to check it out! Isobel’s figuring out life and love and a career in New York City with way more charm than Carrie Bradshaw ever did, and with much better partners, and with a much more realistic experience freelance writing! It’s sad and sweet and really authentically funny. Next week is season two finale. (Ten eps total this season.) — Heather