This week on Bomb Girls, the sunshine is gone and nothing will ever be okay again. That’s because this was the last Bomb Girls episode of all time, and I don’t want to live on a planet where Bomb Girls is no longer a reality. Writing this recap and realizing it would be my final adieu was almost too much for my emotional stability.

FYI: It is incredibly difficult to write when you are sobbing on your keyboard while simultaneously attempting to sad-eat large quantities of cheese.

The sacrifices I make for you lot, honestly.

Kate and her mom are coming home from their Girls’ Day Out, where they likely got their nails done and shopped at Chico’s and talked about how Kate’s dead dad was evil, only to be bombarded by Kate’s bachelorette party. Now, I don’t know about you folks, but my mother and boss are the last two people I want in attendance for whatever gay pre-commitment-ceremony bullshit my best friends will inevitably pull off despite my general protests. 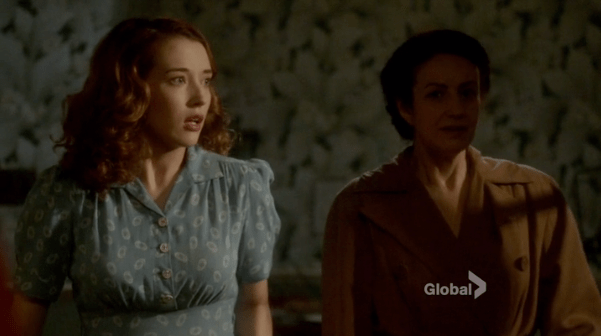 oh god what fuckwit hired goddess and she

Apparently the wartime economy has put a strain on the production of penis-shaped products, because there is no fake genitalia in sight, but there is an awkward tossing game and an umbrella with stuff in it. Bachelorette Party Version Betty seems a little more tame than Bachelorette Party Version Vera, which probably would have involved a stripper disguised as a firefighter and whatever the 1940s equivalent of twerking was, but in Betty’s defense, lesbians are really only good at planning doggy meetups and vegan potlucks. 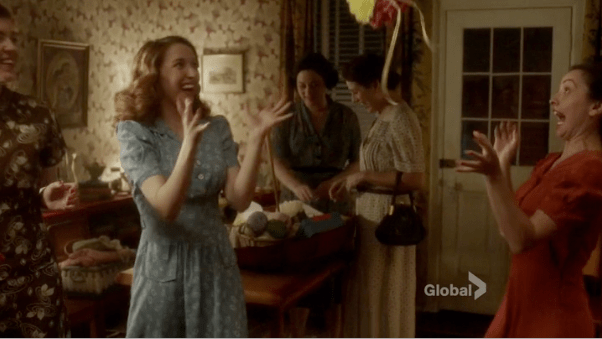 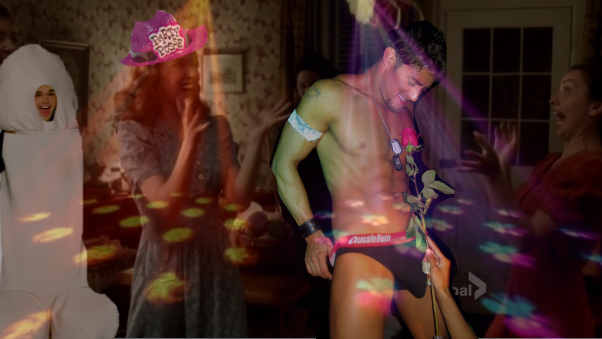 Fun Fact: Betty goes ahead and compares the toss game to basketball. She might as well have compared it to softball, rugby, or roller derby, lesbihonest. Baby girl, don’t you ever change your stupidly homosexual ways.

Kate’s mother takes her aside to tell her that a detective is starting to ask questions about her deceased father. And this, my friends, is where we know things are about to take a one-way ticket to hell in a handbasket. A handbasket full of lesbian tears, I might add. Remember that time Betty and Kate accidentally murdered Kate’s father? Me neither. I had chosen to cast it to the back of my mind in favor of my hardcore investment in everyone’s happiness and ability to scissor without interruption. The resurfacing of the detective storyline in the season/series finale can only mean one thing, and that thing is our utter and complete devastation. 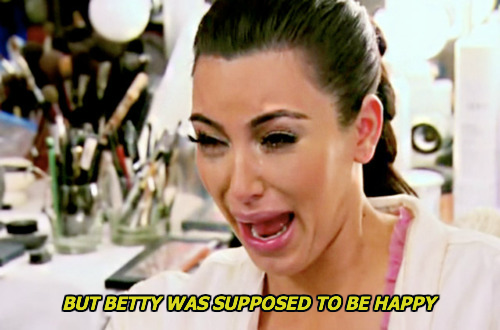 Kate takes this moment to look with great concern at Betty, and then scope her tight Germanic ass. Whatever gets you through the stress, babe.

Over at Chez Depression and General Unhappiness, Lorna and Bob are arguing because Lorna doesn’t believe in blood drives? Homegirl, it is not the Dark Ages anymore. We’re vaccinating for real shit up in here. We are no longer afraid that moles near the breast are signs of consorting with the devil — I think we can handle a friggin’ blood drive. Also, Dr. Patel thinks he can end Bob’s invalid status, which means Lorna is reaching for the holy water. Happiness? Not in this house. 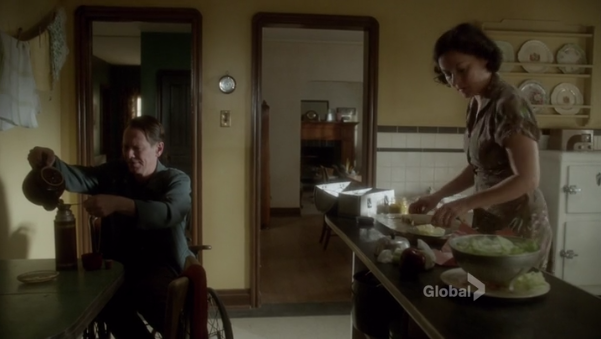 Cut to a shot of them actually sticking needles in arms and drawing blood. If y’all are like me and typically barf around blood, I can tell you to a) skip the latest episode of My Strange Addiction, and b) probably look somewhere else, like the McSwagger tumblr tag you have open in another window. Lorna is in attendance, talkin’ shit on modern medicine, and Sheila feels free to sass her right back. 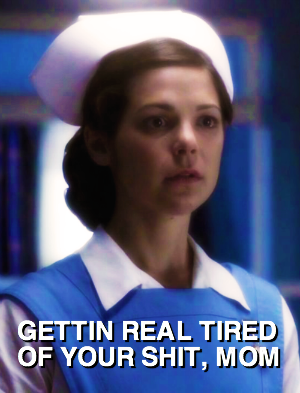 Betty’s talking about Canadian politics or something? I don’t know, my only knowledge of Canadian politics is via all my Quebecois separatist cousins so I have no idea what you guys do up there except apparently it involves stifling francophone culture? Whatever, my job is not to provide you with a working knowledge of the political climate in Canada, but to tell you when your favorite lesbian does a thing. So right now Betty’s drinking juice and talking about a thing. You’re welcome. 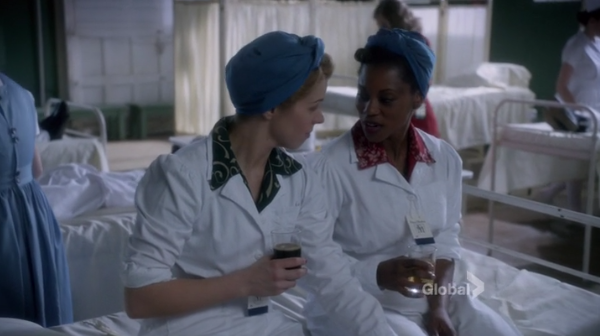 Gladys is getting her blood drawn when Bad Accent No Stop happens to be reclined in a suggestive position next to her. I could say something very deep about how this conversation takes place while they are both expelling body fluids, but I don’t think this narrative actually deserves that kind of attention. Gladys’ Magical Vagina apparently strikes again, because Bad Accent Why How cannot stop with the sultry talk. It’s weird. SPIES! 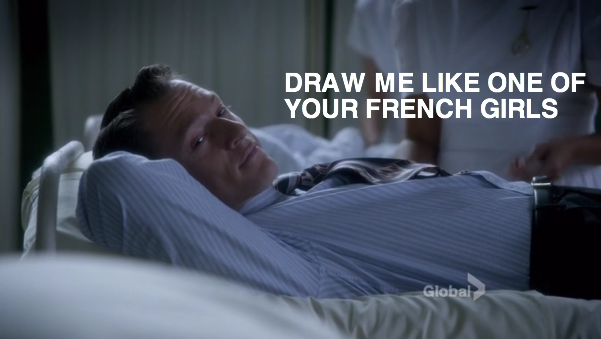 Vera runs into a soldier who is the brother of another soldier she also ran into in the biblical sense. It’s awkward, but Vera continues to be the most progressive unashamed queen of everything on the block. Marco overhears and is less than pleased with the mental image of Vera sleeping with whoever she wants, because patriarchy, so y’all know that’s gonna boil over soon. Like a pot of spaghetti. Get it? Spaghetti. It’s been a long time, pasta jokes. Too long. 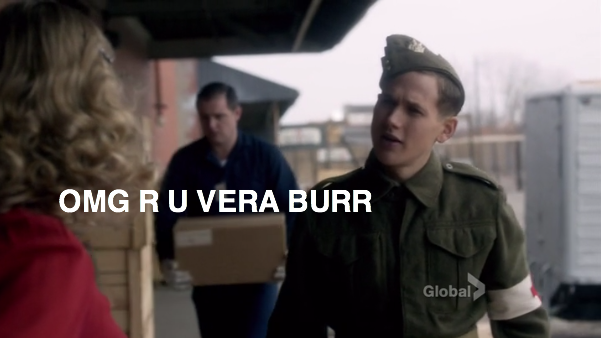 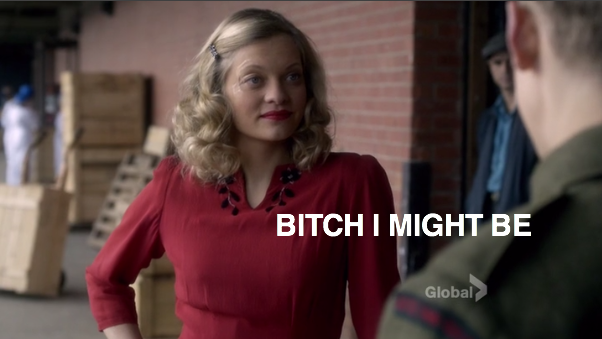 Kate spills to Ivan on the factory floor re: her name, her surprise-alive mother, and some other minute details you might want to make known to the person you are agreeing to spend the rest of your life with. Or, instead of having this awkward conversation, you could gay elope with the one person who already knows everything and still loves you unconditionally. Kanye shrug. 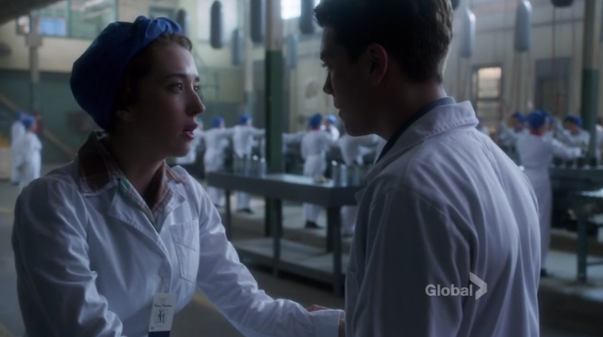 also i know i told you that doing sex was when you hug and turn off the lights and don’t touch each other, but i lied

Lorna decides to actually donate blood. Sheila can barely hold in all her “Lorna PLZ”s but somehow she manages. What I love about Sheila is that she literally has no time for anyone’s bullcrap. She is sexing Dr. Patel and his perfect hair and furthering her career without concern for anything else, even though everyone around her seems set on sapping the joy and prosperity from life. Sheila does not have the energy to deal with your massive time-sucking and happiness-sucking efforts, she just doesn’t. 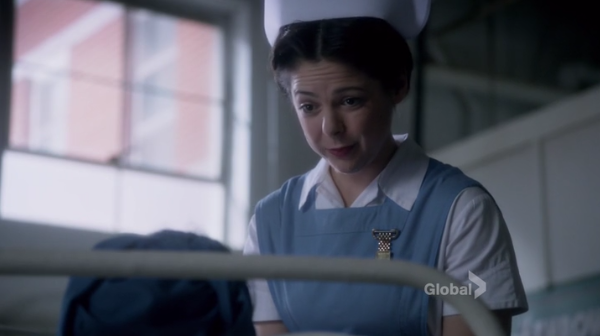 if you don’t want to play with the big dogs, you need to stay on the porch

The detective is interviewing Kate, which means we are barreling one step closer to the ending we all did not want to see coming but could somehow see from a mile away.

Kate handles all of this with her perfect Disney face and her way-too-perfect Disney eyes, but the detective is a little fixated on the fact that they found the body placed under a tarp. Now, I’m no writer or contributing editor, and I certainly don’t creative narratives for a freelance living, but maybe someone else found the body and put it under a tarp without reporting it like a homeless person, or passersby, because saying it absolutely had to be Kate is just a litttttttle bit of a reach. And I was an English major, so I understand constructing Everest-like bullshit mountains out of miniscule fact puddles. 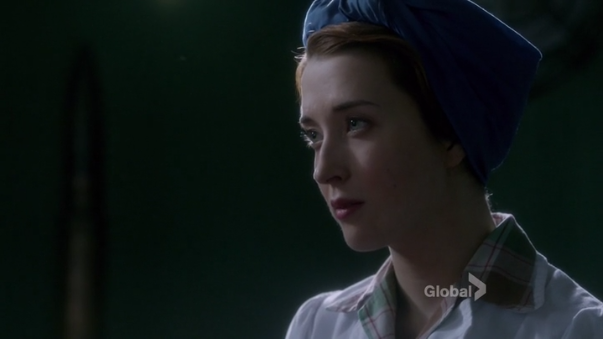 author’s note: still trying to decide how many times i can caption photos with gucci mane’s confession of “bitch i might be” 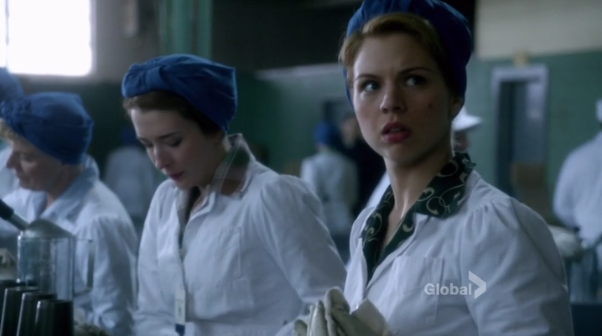 Marco decides the best way to get into Vera’s pants is to use slut-shaming. Swing and a miss, buddy. Vera does not have time for any of this as she has to go and run the entire universe. 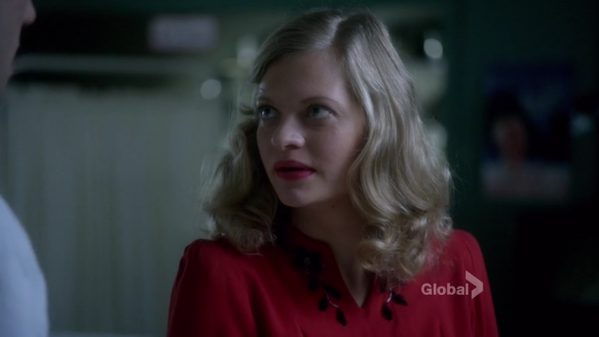 Bad Accent Hey Stop and Gladys are hanging out in a field, v. romantic, and Bad Accent No Gross gives Gladys a bomb except she doesn’t know it and she fools around with it and accidentally sets it off so he covers her body with his body and I just… the fact this pairing will probably get romantic and physical closure and McAndrews will not kind of makes me want to set my hair on fire. SPIES! 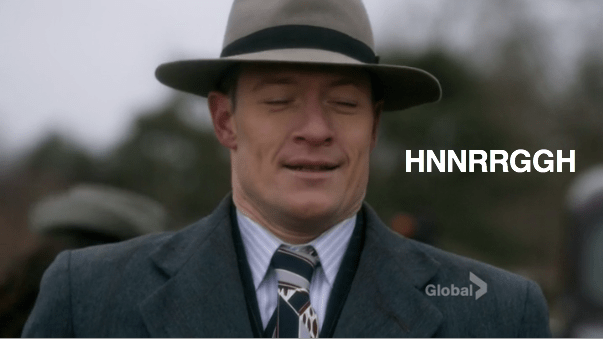 Lorna is doing some hardcore detective work and realizing that Kate is the Marian from that letter about Betty being a full-on lesbian. Lorna’s like, holy shit, it’s all coming together now! That’s why Betty gives her coworkers chestbumps and went through that period where she only wore overalls for a month! That’s why she always stares at Kate’s ass and tries to touch her hair when she isn’t looking! Because GAY! 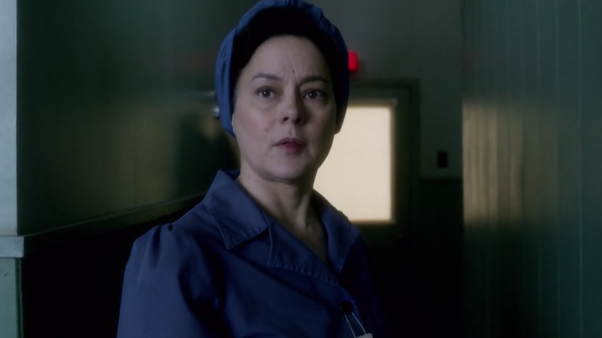