I didn’t know I was going to be presenting you with a blondie this week. When I’m feeling stressed — and lately, I’ve been ELECTRIFIED with both excitement and anxiety about the fact that my first novel is coming out in 10 days — I like to take an afternoon break, where I take deep breaths while I pull an espresso from my machine, shake it up in a jar with milk, ice and mint, and eat a little dessert. Recently, I had a hankering for a chewy dessert bar, and I didn’t have enough chocolate to make brownies, so I was like “Duh, blondies!”

I went searching for a blondie recipe that would really capture the chewiness I was after and ran into this gem. What I was most intrigued by was that there is a smushy layer of browned butter that gets baked into the middle of the blondies. And looking at it reminded me of a peanut butter and jelly sandwich — which I thought would be a great flavor addition to the blondie!

My truth is that I don’t like peanuts thaaaat much, and jelly felt like overkill. So what I ended up with was a blondie with a ribbon of blackberry-miso-browned butter in the middle, and I’m here to report that it’s really, really good. Whether it’s breakfast, a stress break treat or a stoned midnight snack, it’s excellent. The miso (as you might already be aware since I add it to everything, like these cookies) adds a salty, nutty dimension and the blackberries add a tartness brings a nice contrast to a big tray of butter and sugar. 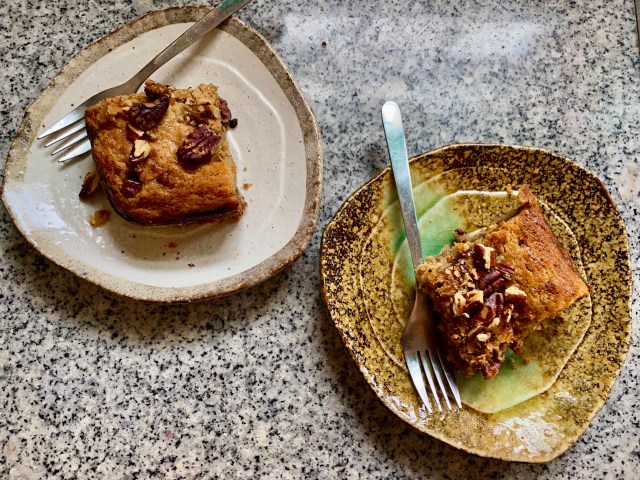 Okay, so first things first: you gotta take care of the pan. In a world that is not mine, you could grab your 13 x 9 pan and set your oven to 350 F.

However, I have a strangely dimensioned ceramic casserole dish from my mom that is 12 x 7 with a pretty high wall, and I ended up going with this dish. I buttered it and dusted it in flour and set it aside. Then I set the oven to 365 F to accommodate for my extra depth.

Then, I got started on my browned butter mixture. I have to tell you that making browned butter over a hot oven during a late-summer heatwave is the closest I’ve been to a sauna in months. Prepare for both a pore cleanse and blondies. Get out a medium saucepan, plop in your butter, room temp or cold, and cook it over medium-low heat, stirring constantly, until it bubbles and then you start to see little flecks in the bottom of the pan. These flecks will brown very quickly, so keep your eye on them. and when they start to get a little tan, I keep stirring and take the pan off of the stove to see how far they’re gonna go. Butter is one of the few things, in my opinion, that isn’t great burned, even in a blondie. 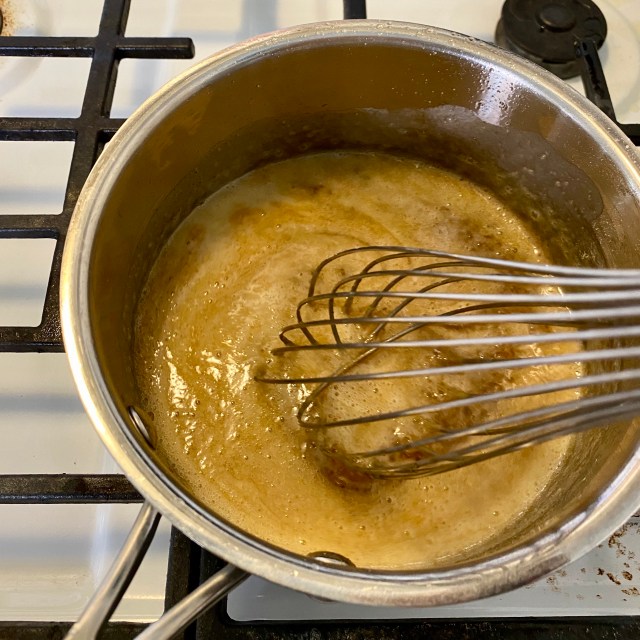 Once the butter is done, pour it into a small mixing bowl. It’s time to blend the miso and the blackberries. I used the mini food processor that is powered by my hand blender, but you could also use a blender, or you could muddle them — however you want to smash the blackberries and mix them with the miso, go for it! 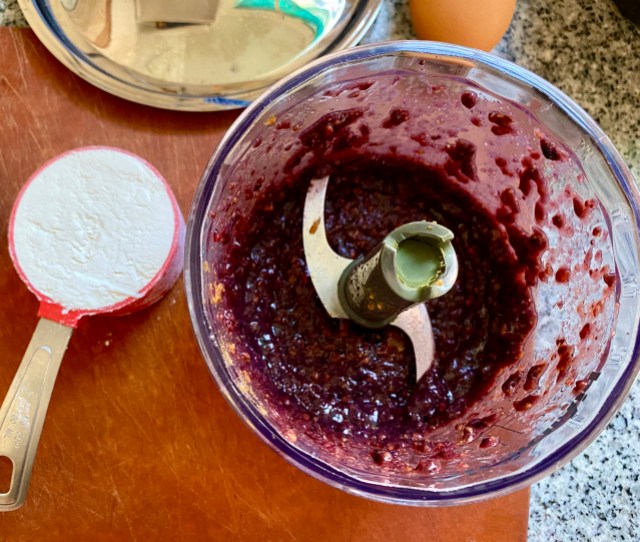 I will say that the blackberry seeds might bother you. If that’s the case, you could blend them, strain the juice and then add it to the miso and browned butter. I personally found the texture of the seeds in the blondies strange in a good way.

Once you’ve managed to combine the blackberries, miso and browned butter, add the egg and 1/3 flour, 3/4 cup brown sugar and whisk it together. You want all of the flour combine, and it should form little ribbons that cascade, like a set of stairs into the foyer of a mansion. Set that bowl aside.

In a large mixing bowl, beat the butter and brown sugar together until they get fluffy and combined. I did this by handing my friend Vinh;Paul (who you might remember is good with kitchen gadgets) my electric hand mixer and telling him to do it. But you could also use a stand mixer or even freehand it with a whisk. And tbh, if you don’t get it fluffy, but it’s fully combined, that’s okay.

Next add your eggs one at a time, and then add the vanilla and get them mixed all up. This is the point where things should start to get a little fluffy and creamy. 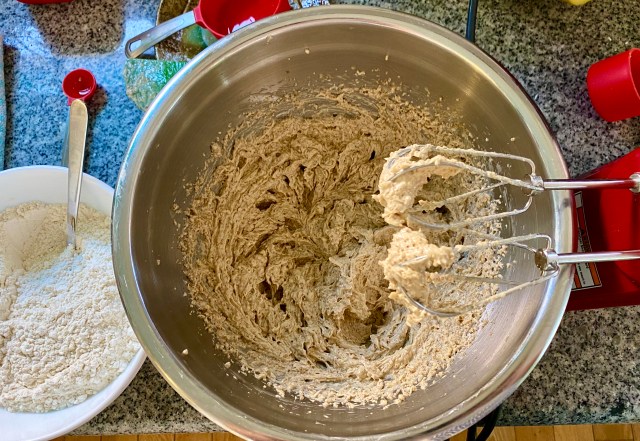 Then I mixed the dry ingredients into this large bowl, mixed it at low speed and then added half of the toasted pecans.

Now you’re ready to pour the blondies-to-be into your baking dish!

I eyeballed about half of the batter and poured the first layer in the pan. It looked admittedly like a really thin layer, but it will rise, so don’t worry. 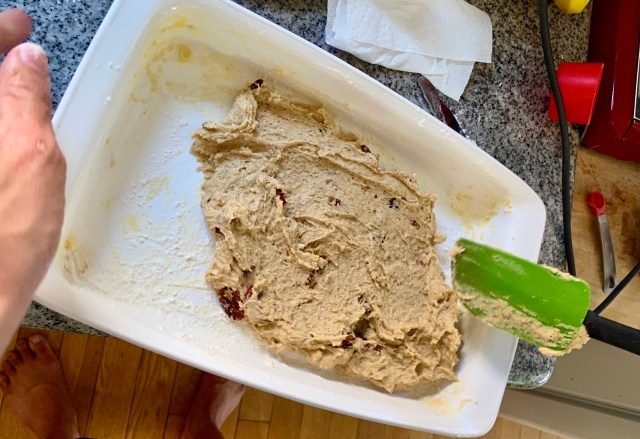 Then I got the browned butter mixture and poured it all in, in as even a layer as I could, across the top of the batter. I used a spatula to smooth it out where it seemed uneven. Then we poured the rest of the batter on top. Vinh;Paul was very helpful in getting this top layer to cover the blackberry-miso-butter layer. There were places at the edges that were iffy, but we learned that this is totally fine. 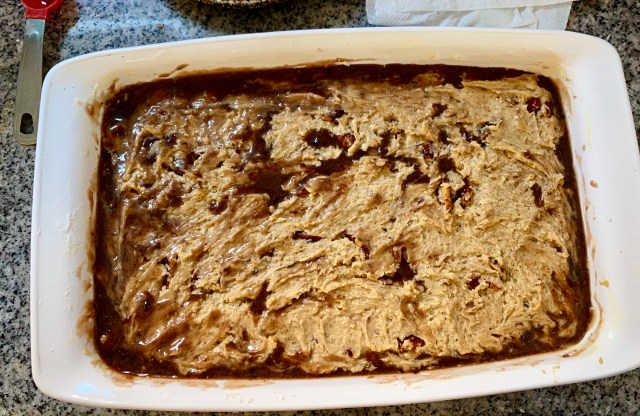 Then I popped the whole tray into the oven to bake. I set a timer for 20 min. When the tray was still jiggly on top, I sprinkled the rest of the toasted pecans on top of the blondies. I put the tray back in the oven for about another 20 min, and pulled them out again when the edges were browned and when a wooden skewer came out mostly clean — there were distinct crumbs, but also some moisture from the browned butter layer.

My friends and I have been eating these blondies wildly, the tray was half gone the same day I made them! I’m eating one now, as I write this. They’re just really satisfying, and you know what else they’re good for? Eating while you watch the Great British Baking Show. Because I always feel left out when they have a dessert to eat and I don’t. And that, friends, is just one small way that I’m easing my stress. 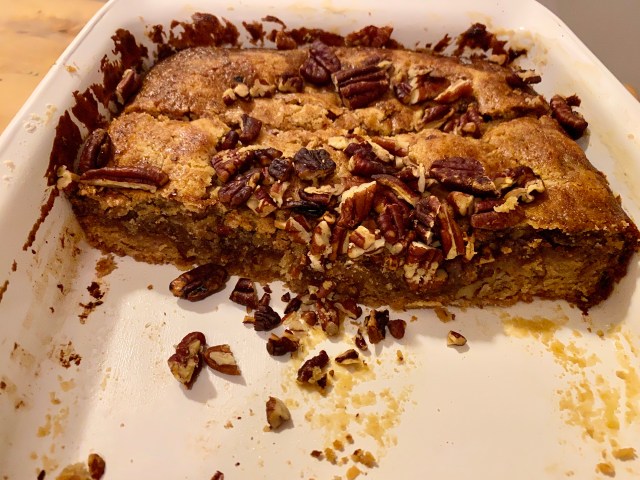