Happy Halloween, Thunderbolts! And greetings from on the ground in the Sunshine State, where I’m working hard to make Andrew Gillum the first black Governor of Florida! Since I’m on the campaign road, we’re going to have a bit of an abbreviated recap this week.?

I promise, when Black Lightning returns on November 13th, I’ll be home and we’ll go back to our normal routine – hopefully from the security of a future where check and balances have been restored to our government and the Big Blue Wave has ushered in a new set of progressive leaders on the state and federal level. Sigh. A girl can dream, right?

Anissa Pierce is doing more than dreaming, she’s taking righteous justice into her own two hands. Gambi shows Jefferson the footage of Anissa doing her whole “Vigilante Thunder turns Robin Hood” song-and-dance routine to get the money for the church’s free clinic. I think we all could’ve seen this coming, but Jefferson is outraged. How many more times is he going to have to explain the dangers of their work? 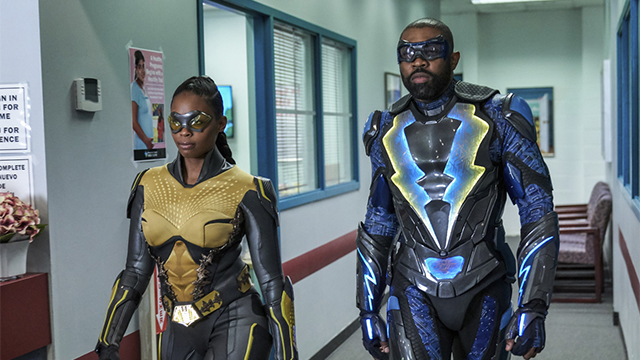 Yes hello we’re here to talk to the person in charge of the CW Arrowverse crossover events.

Honestly, Jefferson’s motivation felt murky to me. He starts his shouting match with Anissa in a place that we’ve seen from him multiple times in the past, “Your power makes you a target. Being a black woman makes you a target. You have to take precautions.” Then he makes a swerve somewhere down the line and ends up at “If we steal then we are no better than the criminals, we must have a moral code”? That’s trading a stronger point for an infinitely weaker one, if you ask me.

I’ve sided with Jefferson in the past that Anissa’s impetus nature is not always the best move in an America where state violence against black women’s bodies is a daily reality. This feels different. I agree with Anissa; stealing from mobsters to give money to the impoverished and most vulnerable isn’t the same thing. Why should she follow the arbitrary moral code set out for the family by Jefferson when there are multiple ways to solve a problem? Anissa’s creating her own moral code and it starts using her powers with doing what’s best for her community by any means necessary.

Jefferson has always been protective of his daughters, and arguably overly so, but this was the first time that I could recall him being controlling. He pulls out “As long as you’re under my roof, you will follow my rules” and Anissa is stunned. She narrows her eyes and squares her jaws. He wants to go there? Okay. She’ll be out by morning.

She moves in with Uncle Gambi, which is all well and good, but am the only one who hoped when she was packing her bags that she was going to end up at Grace’s instead? I’m sure Uncle Gambi’s underground Batcave has it’s perks, but we all know hot sex isn’t going to be one of them. 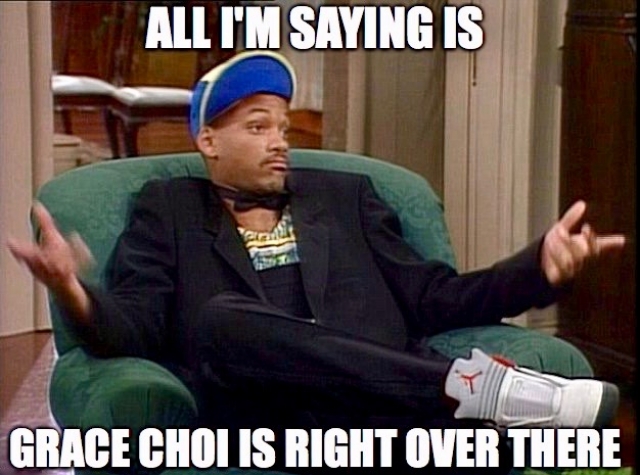 It drove me crazy that Jefferson ended up being right, by giving Rev. Holt’s clinic all that money Anissa effectively put a red target on their back. Black Lightning and Thunder work together to save the clinic from two bomb explosions. Humbling a little and recognizing that Anissa needs her own space, Jefferson offers up Grandaddy Pierce’s house to her. I’m already so excited to see what Anissa does with the decor! Hmmm, I’m imagining “Solange Knowles meets Janelle Monáe at a protest rally” – but, with lots of smell-good candles and a panty-dropper playlist.

Speaking of Jefferson overstepping the line, what was up with the men of Black Lightning last night? Gambi has always been morally grey, and one of my least favorite extended family members of the Pierce clan, but who in the writers’ room approved the God awful decision to have Gambi keep Vice Principal Omarosa locked up in his Batcave with literal chains? Every time he want down there to interact with her, my stomach churned. The visual images of a black woman writhing in pain against her ankle and arm restraints while a white man stood over her were too much for me to bear. Everything about the framing of those choices felt violent, unnecessary, and ultimately regressive for a show that usually prides itself on centering black women’s stories. Plus, Omarosa dies in the end! Which makes her killing of Syonide from the Season Two premiere even more pointless than before!

One day soon, we are going to talk about how it’s the female villains on Black Lightning who are the only ones paying for their sins with their lives. Lady Eve, Syonide, and now Vice Principal Fowdy. The scales are imbalanced and I’m taking note. 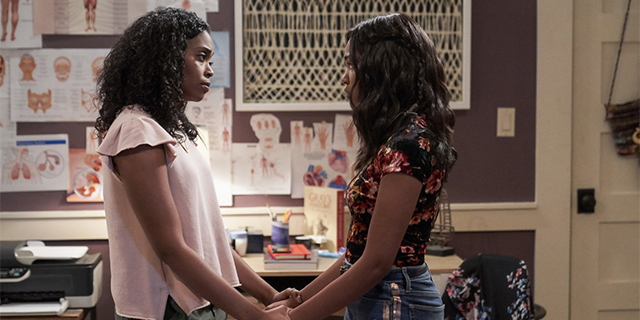 Look I know Pretty Little Liars skewed your perception but stalking is not romantic, okay?

That will have to wait until I’m not crouched over a computer in the swampy heat of Florida; for now lets talk about how Khalil didn’t want to be left out of the “Men Are Trash” club that Black Lightning seemed insistent about upholding last night. His stalker relationship with Jennifer is ABUSIVE. Flat out. It’s textbook abusive behavior for him to continue texting her, DMing her, and pushing himself into her life despite her repeated No’s. Obviously Khalil the “Painkiller” is a villain, but this behavior has yet to be singled out as uniquely bad. I need Black Lightning to do better about the nuances of this situation. A super villain with nerve-killing darts isn’t grounded in our reality, but a teenage boy who doesn’t know how to take “No” for an answer or respect the boundaries of the young women in his life most certainly is.

So far, Anissa seems to be the only one raising red flags about Khalil (though to be fair, neither Pierce parent knows that their daughter is being actively stalked by her ex-boyfriend). She made Jennifer promise to stay away, but after it’s announced that Jenn will be getting homeschooled for the foreseeable future, she breaks down and meets Khalil anyway. Teenage boys battering their ex-girlfriends until those girls finally break and give the boys what they want is NOT the story I signed up for. 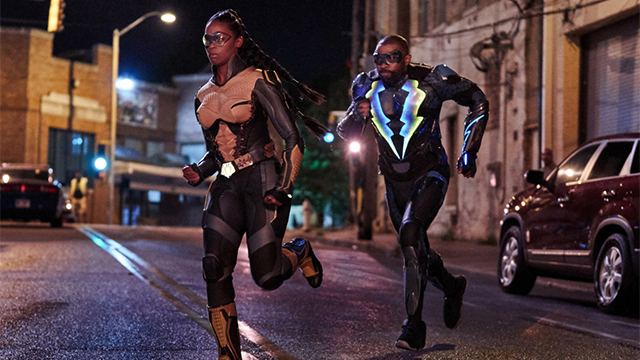 It turns out that our gut suspicion last week was correct: Tobias went to jail precisely because he wanted to. By killing off everyone who could connect him to Grandaddy Pierce’s murder and destroying all the evidence, there was nothing left to connect him to the crime. In allowing himself to be arrested, Tobias was essentially forcing Henderson to admit he had nothing and publicly clear Tobias’ name. Now, after 30 years, he’s free to come out of the shadows to make a name for himself as a legitimate (and despicable) businessman. As Denzel Washington says in the cinematic classic Training Day, “This shit is chess; it ain’t checkers.”

Two quick things as we wrap up:

First, Doctor Inmate is a hair’s breadth away from figuring out that the control sample in Lynn’s study is the Pierce family DNA. That’s 100% going to end badly.

Second, by far the most powerful scene in last night’s Black Lightning came without words. With Jefferson sitting at his desk, first in silence and then with the slightest jazz bass underneath, the camera zooms in on the poem behind him.

(It was never America to me)
O, let my land be a land where Liberty
Is crowned with no false patriotic wreath,
But opportunity is real, and life is free.
Equality is in the air we breathe. 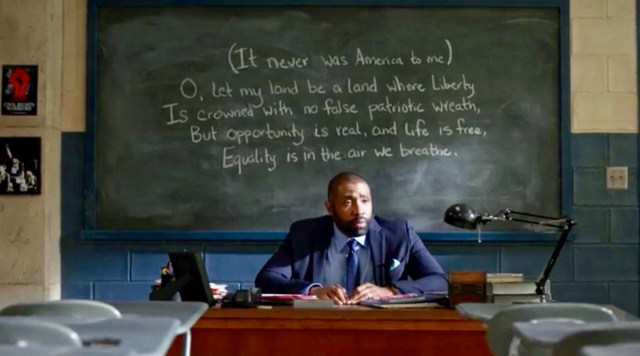 The poem is “Let America Be America Again” by Langston Hughes. There was no way that Black Lightning could’ve known that this scene would air the same day we found out that Trump’s renewed call to galvanize his racist, hateful base would now include a proposal to revoke the birthright of American citizenship. That it would air less than five days after a violent, reprehensible anti-semantic terrorist attack ripped a hole through the fabric of this nation. Just a week after the Trump administration’s revelation that they would like to literally define transgender Americans out of existence.

There was no way to know the specifics of those timings, yet we always have known them. Langston Hughes knew them in 1935. We’re the sacred keepers of the promise of America. And we will not stop fighting.

See you all in two weeks.