Alicia Johnston knew what she was doing when she informed Seventh-day Adventist leadership in Arizona about her bisexuality; she knew she would lose leadership of her congregation.

Still, she made the choice to pursue an authentic life grounded in theology that identified her as a child of God. Now, Johnston hopes that coming out and accepting the consequences will help other queer Christians in denominations with conservative theologies about LGBTQ people.

“I thought, if I’m going to blow up my life I’m at least going to use that as an opportunity to give hope to people and help them see that they’re not alone, and hopefully also let it be a wake up call to people in the church that this is a big deal and they have to stop ignoring us,” Johnston said in an interview with Autostraddle. 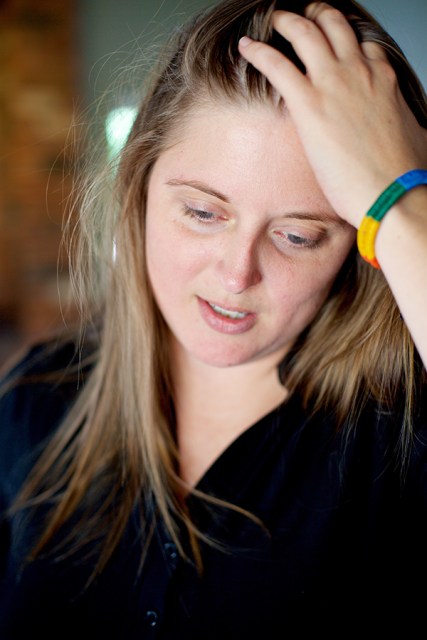 Johnston grew up in the Adventist church, and she loves the church’s values and traditions, such as a commitment to the environment and weekly observance of the sabbath. She attended Adventist schools for most of her life (Adventists are known for having high-quality educational institutions) and eventually went to seminary. It was a tough road as a woman pursuing pastoral ministry in the denomination, so she was overjoyed to receive a call to Foothills Community Church, a small church near Phoenix Arizona — and near her family. At one time, she thought she would live out her career in ministry serving that congregation. It was “a dream come true kind of church,” she said.

At the same time, she was living in conflict. She had always known she was not straight but had long decided she would live her life as if she were heterosexual and never pursue dating or relationships with women. After last summer’s shooting at Pulse Nightclub, a switch flipped.

“it was the first time I realized I was part of the LGBT community, because the way that LGBT people were responding is the way I felt. It felt like something happening to my community.”

She took to intensive study of theology to learn about understandings and viewpoints in favor of affirmation and welcome as well as condemnation and exclusion. She found herself living in constant tension that made her feel she wasn’t living with integrity. After a lifetime of certainty that the Bible provided a clear case against same-sex marriage and relationships, she was shocked to find things weren’t so simple. Eventually, she embraced an affirming theology and began to understand what that would mean for her. After much prayer and conversations with friends and family, she decided to come out.

She wrote a letter to her congregation’s leadership and to the conference (the Adventist governing body that includes her former church) explaining two things: One, that through study and prayer she had embraced a theology that affirms and includes LGBT people, and two, she herself was bisexual. Given the gravity of the decision and what it would mean for her career, she decided to also come out publicly and created a video which she publicly shared that describes her journey and her decision to come out.

For her, coming out isn’t particularly about being able to act on her attraction to women (when the conference asked if she was involved with anyone she answered no). It’s about living as her authentic self and being in solidarity and relationship with other LGBTQ Christians. She was tired of hiding under a heterosexual privilege that didn’t belong to her and, as she put it: “You can’t say ‘this part of how I love is good and this part of how I love is bad’ because it doesn’t work like that.”

To her surprise, she received a lot of positive responses from her congregation and even from the conference, who affirmed her as a “gifted theologian and pastor.” Of course, they still asked her to resign, citing church doctrine.

“While the Seventh-day Adventist Church deeply believes it’s our responsibility to minister to all people, we also have a mandate to adhere to all Bible teachings,” the conference said. “Fundamental Belief #23 states: ‘Marriage was divinely established in Eden and affirmed by Jesus to be a lifelong union between a man and a woman in loving companionship.'”

Of course, some really nasty online articles from Adventist writers which I won’t link to here describe Johnston’s work as that of the anti-Christ. But Johnston is far from discouraged. Instead, she believes now is the time in her life that she can begin her authentic journey as a minister with integrity. Her goal, she said, is to provide ministry to LGBTQ Christians, especially other Adventists, and to people who might be good allies if they only had the knowledge to embrace affirming theology.

“There are 17 million adventists in the world now, and how many of them are queer? If I have the opportunity to speak to them when no one else is going to, I have to take that opportunity,” Johnston told me.

Although she can no longer serve in the role of pastor, Johnston is still a minister. Life is pretty up in the air, but she’s making connections with other bisexuals and with LGBT Adventists, including through Kinship International, which has been working on behalf of LGBT Adventists for 40 years. She’ll never be employed by the church again, but she is willing to work from the outside in.

“God is love, and this is a beautiful gift. Queer perspectives on faith and on relationships, sexuality and gender is something the church desperately needs. For non-affirming churches, they’re making love and relationships all about gender and people’s roles, when they are supposed to be about commitment and sacrifice and uniting your life with someone else’s. The church needs queer people to remind them what marriage is. This has clarified my ministry, it has clarified my understanding of who God is and what God is trying to accomplish in the world, in the church, in marriage. It’s clarified my life and my ministry, even if it’s made some other things less clear.”

Somebody please write “The church needs queer people to remind them what marriage is” in the sky with a jet plane. You can follow Alicia Johnston’s work through her website.