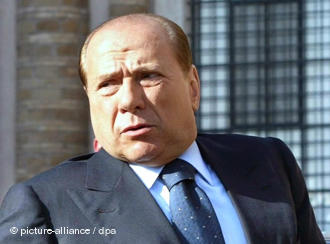 Yesterday, Italian Prime Minister Silvio Berlusconi defended his penchant for affairs with much younger women in front of a motorcycle industry trade show in Milan by basically saying that at least he’s not gay: “As always, I work without interruption and if occasionally I happen to look a beautiful girl in the face, it’s better to like beautiful girls than to be gay.”

Arcigay, an Italian LGBT rights group, has responded to the comments with the following statement:

“It is inacceptable that a Prime Minister, in an obvious situation of difficulties because of his senile passions, pronounces such a homophobic and vulgar nonsense statement, insulting lesbian, gay and trans. We are not willing to become the scapegoat of a weak Prime Minister that with this statement shows that he belongs to a really old culture. Silvio Berlusconi’s way of representing the institution dishonours Italy and his ‘macho latino’ rudeness is among the causes of the grotesque climate in the country.”

Arcigay has also called for an official apology. Meanwhile, Julianne Moore has called Berlusconi’s comments “unfortunate, archaic and idiotic.” At a press conference in Rome to promote The Kids Are All Right, she said, “To hint or to say that there is something wrong with homosexuality … it’s embarrassing when people continue to perpetrate these untruths.” (@ joemygod @nyt)

A DEGREE IN GAY:

The Columbian College of Arts and Sciences, part of George Washington University in Washington, D.C. has established a minor in Lesbian, Gay, Bisexual and Transgender studies as the result of over a year of lobbying by student leaders and professors in a variety of departments. The new program will feature courses such as “Transnational Film and LGBTQ Culture” and will begin this spring. According to GW Hatchet, a campus paper, the program is a direct result of student initiatives and should appeal to both prospective career activists and the general student population.(@gwhatchet)

Two Israeli women — TV host Gili Shem Tov and professional dancer Dorit Milman — became the first same-sex couple to compete in an incarnation of “Dancing with the Stars” when the show, called Rokdim Im Kokhavim in Israel, launched its sixth season this week. Tov, who has a female partner, told the BBC: “I have realised that dance is about co-ordination and energy between two people, whether female or male. The challenge to dance with a woman in a public contest interested me because it’s unique and has never been done before. Because I share my life with a woman and have a family with her, to me this is the most natural thing to do.” She and her professional dancer partner will alternate leading roles. (@bbc)