On (not) being queer.

‘In a land like Babel where language bubbles and bursts from hot headed needle points of knowing, who am I today?’
– e.m. ohargeayn

I am not queer.

I am gay. I am a lesbian. I am politically charged and funky and pierced and wear costume eyeglasses and believe in the spectrum of everything and hope to wear unmatched socks forever because life seems more appropriate that way. I believe in love of self and sister and space and brother and that it takes a wider lens than what I may have started off with. I believe in whoever fucking whoever and that’s okay as long as they end up respecting each other’s hearts and bodies and desires. I believe in safe spaces and safe people. I am mentioning these things as meditations on what I have understood to be championed in ‘queerness’, not as half-assed attempts of definition. Mismatched socks included.

One of the things that keeps me from calling myself queer, besides its etymology of literal peculiarity and/or strangeness is that it seems like a form of anti-representation. And outside of myself, I really like that. You don’t have to state yourself as ‘gay’ or ‘lesbian’ or ‘bisexual’ you can just be queer and have that be another way of saying: radical in my love of ______ or, completely identifiably ____. To be queer is to be of the ilk that believes in safety inside of expression and lord knows, especially as it relates to brown spaces, we need safe, anything-goes energy anywhere we can find it.

It’s just that of all the spectrum riding, genuinely evolving, delicate fixtures of flight in my life, I so love my sexuality being articulated as concrete. And yes, even concrete gets uprooted and reshaped and cracked and stepped inside of (whoa, I’m losing control of this metaphor!)—but that isn’t the point. The point is I love being gay. I came to understand myself, my identity in spaces that did not lend themselves to the latitude of this city at this time in history. ‘Queer’ felt as distant to me as ‘butch’—a term I’ve slowly begun to integrate into my spectrum of personal representation. Being queer meant having a ‘partner’ or ‘lover’ and I wanted a girlfriend. I have been so grateful, over the last several years to be introduced to queer spaces and to understand queerness as a statement of person and not sexual-identity. Like ‘butch’, I’ve tested it in my personal language of late. It feels quite right in so many realms—when talking to groups or conjuring the notion of space where we all can make room for each other. But, despite my greatest efforts to be so—I end up just feeling like a gay-ass in a queer-ass’s clothes. Love me anyway. I love you.

Gender should exist and matter. 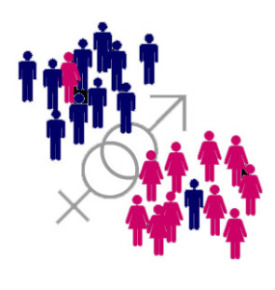 It should just be as fluid or coppered as you need for it to be. Gender, the representation of the masculine/feminine (and everything in between) is not to blame for the limited visage of the world. In all things there is the embodiment of self—and self should fall wherever it wants on the spectrum. Gender is the embodiment of different elements of what it is to be human on said spectrum and we would do very well to incorporate them and attempt to push their limits (a la genderqueer) instead of banishing them into the box of ‘not real’ or ‘not necessary’. Gender should be pushed, spliced, turned on its head, mocked, made into expression, turned inward, worn outward—but it should not disappear. Nor can it.

ALSO ALSO ALSO the act of existing outside of the realm of gender (whether or not that is even *actually* happening…) does not speak in the language of the human condition. It is a privilege to imagine such a space and doing so, in my mind, leaves people out. The goal of progress should never be exclusion. The concept of removing gender as an identifying factor is exclusive because it is not a concept accessible to MOST of the world…particularly to women. In believing in its non-existence, what are we doing to the people who exist inside of this paradigm everyday?

And in my final bombshell, I announce, with no small amount of shame:

I’m over poorly rendered burlesque. Somehow this feels connected to being a bad gay. Either way, please New York City and the rest of the world, step it up.

For more inflammatory judgment about the world in and around her, follow Mo (the ‘mo) on Twitter @momannwill. Or, email equally judgmental inflammatory thoughts to morganmaw@gmail.com.