Last night, the NCAA selection committee announced the names of the 68 men’s teams that, presumably, will take part in March Madness. This year, though, teams face an additional hurdle: they’ll have seven consecutive days of daily negative coronavirus tests in order to be cleared to participate. It’s possible that some teams will have to drop out or be replaced. If the team can’t be replaced, their would-be opponent gets a no-contest victory and will get to move on. It’s also possible that some teams will travel to Indianapolis with a skeleton crew — just enough players to field a team — while the rest of their team waits to get their COVID clearance. As I filled out my first bracket this morning, I thought: “there has never been a more unpredictable tournament.”

But then, Autostraddle March Madness 2021 entered the chat.

That’s right, we’re back. After taking a year off to adjust to the new normal of a pandemic, we’re back, asking you to make impossible choices between your favorite kisses and coming outs. But we’re taking things up a notch this year, hoping to make the experience more fun and interactive for our readers.

We started that on Friday, when we invited our A+ readers to become this year’s selection committee and help seed the bracket with some of our favorite couples. Our selection committee sorted through 90 couples in four categories to make their picks for the 2021 tournament…and honestly, they did an incredible job. Their picks are going to make for some of the most difficult choices in the history of Autostraddle March Madness.

But here’s the surprise: A+ readers only seeded half the bracket. While one half of the bracket is devoted to some of our favorite canon ships, the other half celebrates the fanon ships…the fandom driven by on-screen subtext and fan imagination. Here’s this year’s March Madness bracket, Canon vs. Fanon: 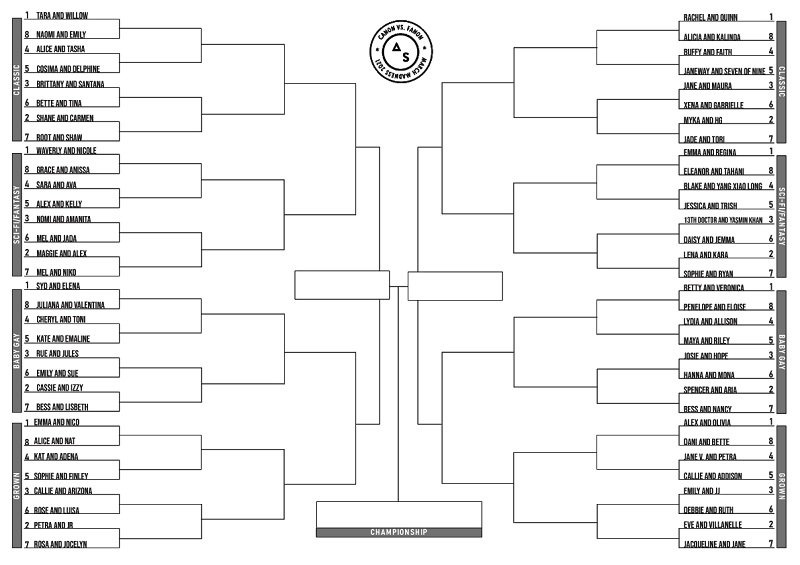 The format looks a little different than usual, to account for the sub-regions, but it still works the same way: we’ve got 64 couples, ready to decide — once and for all — if fanon or canon ships are superior. While you may be itching to vote, that’ll have to wait for another week…we’ll start March Madness voting alongside the NCAA women’s tournament’s opening round games on March 22. But in the interim, we’re debuting a new feature of Autostraddle March Madness: a bracket challenge.

What’s a bracket challenge? Just like with basketball, our bracket challenge asks you to pick the winner of every March Madness contest this year. How do you pick? There’s no secret formula. You can pick all the higher ranked seeds to prevail or you can chose lower seeds, in hopes of scoring some upsets. You can pick the cutest couples to advance or just pick your favorites. You can look at what fandoms are trending on twitter or which fandoms are producing the most fanfic. Do whatever you want to help you determine which ship might come out on top. You’ve got one week to get your predictions in.