On Selection Sunday — the day that the brackets get unveiled for the men’s NCAA tournament — our local newspaper would print a blank bracket in the day’s paper. Every year, without fail, my dad would spread that page of the newspaper out of the coffee table and fill-in the bracket by hand as they announced the teams on CBS. Even once the Internet became a thing, he refused my offers to just print off a pre-filled bracket and would just sit there, scrawling the names of all 64/68 teams into the bracket like the answers to a crossword. He’d etch the entire field in in pen and then switch to pencil to make his initial picks, which he’d update as he learned more about the mid-major teams that’d made their way into March Madness.

So, once the bracket was finalized for Autostraddle’s March Madness, I printed it off and, keeping with the family tradition, I made my picks by hand. I used pen, though, because after watching videos of the 64 kisses many times over, my picks had the certainty that the pens confers. As March Madness picks are wont to be, my picks are a mix of my own personal favorites (yes, I picked Annalise and Eve over Callie and Arizona in the first round, don’t @ me), my expectations about who our readers would like (I know little of Sci-Fi/Fantasy so most of my selections were based on Autostraddle posts and comments) and, when neither of those are conclusive, the kiss itself. Here are my picks (forgive the bad handwriting). Turns out, I’m as bad at predicting the outcome of brackets I made up myself as I am for regular March Madness. Go figure.

But, I digress; that’s not why you’re here. You want to know who our finalists are and how we got here. 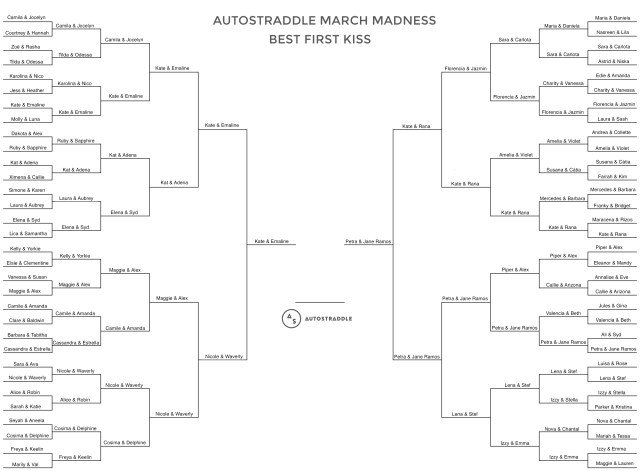 I have to admit, I thought the semifinals would be more competitive, but they weren’t…like not at all. It seems like both the fandoms for Coronation Street and Wynonna Earp just ran out of steam, as both couples drew less support in the Final Four than they had in the Elite 8. I’m less surprised by Kate and Rana’s defeat — Coronation Street had the advantage of being both the most well-known and most accessible (read: English) in the International region so I thought they were a weak regional champion anyway — than I am about Nicole and Waverly. To have run through the gauntlet that was the Sci-Fi/Fantasy region and come out so far ahead, I thought the last few rounds would be a formality before we crowned #WayHaught the winners.

But, then along came #KEmaline. The Everything Sucks fandom, led by the show’s stars, Peyton Kennedy and Sydney Sweeney, came to win and toppled Wynonna Earp. The show that spent ten episodes chronicling the lives of teenage underdogs in Boring, Oregon somehow managed to become the favorites to win this whole damn thing.

That said, they’ve still got one major hurdle to climb, in the form of #Petramos, the newest ‘ship in the field, Petra and Jane “JR” Ramos from Jane the Virgin. Part of me wondered if the enthusiasm behind this relatively new couple would die out — like a kid playing with the shiny new toy who eventually loses interest — but, after watching last night’s episode of Jane the Virgin, I’m going to guess that the flame for Petramos will continue to burn.

The interesting thing about having these two finalists, I think, is that they represent two very different types of first kisses but, for the time they’re in, they’re both pretty perfect. It seems almost unfair to compare them but such is the nature of the game.

As usual, voting for this final round will be open for two days only! Voting for this round will close on Monday, April 9th and we’ll announce the winner shortly thereafter. Feel free to lobby for your side in the comments!

Kate and Emaline – Everything Sucks (Netflix)

Why They Should Win: This kiss is everything that teenage me could’ve hoped for… swaying gently to the dulcet sounds of Duran Duran’s “Ordinary World” in an empty auditorium with the most popular girl in school who you’ve been crushing over for months. This kiss — so delicate, so innocent and so sweet — deserves to live in infamy, especially after the news broke on Friday that Netflix decided not to renew Everything Sucks for a second season.

Why They Shouldn’t Win: Seriously, though: Come on, Netflix!

Petra and Jane “JR” Ramos – Jane the Virgin (The CW)

Why They Should Win: I mean, did you see the kiss? It was a very, very good kiss. Even if it wasn’t real for JR (more on that in a second), it was so very real for Petra…so much so that, apparently, she slipped JR some tongue.

Why They Shouldn’t Win: As great as this kiss was, JR kisses Petra not because she wants to, necessarily, but because Petra’s shown up unexpectedly and JR believes she’s being watched. Also? In one of the first exchanges that JR and Petra have JR says, “never trust tv writers,” and so your Bury Your Gays PTSD has kicked in and now you’re just waiting to see how the writers screw this one up. Her name is JR, for chrissakes!