HEATHERS are Dublin twins Louise & Ellie Macnamara, a duo who have well and truly made their mark on the Irish music scene over the past few years. The comparisons to harmonising twin guitar-toting Canadian counterparts Tegan & Sara are inevitable  – and granted, there are some similarities – but a quick delve into Heathers’ body of work uncovers an original and instantly charming sound, with their Dublin accents proudly audible. (Heathers have stated that they had never even heard of the Quin twins until they had almost finished recording their debut album – instead, they cite Sufjan Stevens, Bruce Springsteen, Yann Tiersen, Yeah Yeah Yeahs, and Feist amongst their intriguing array of influences.) 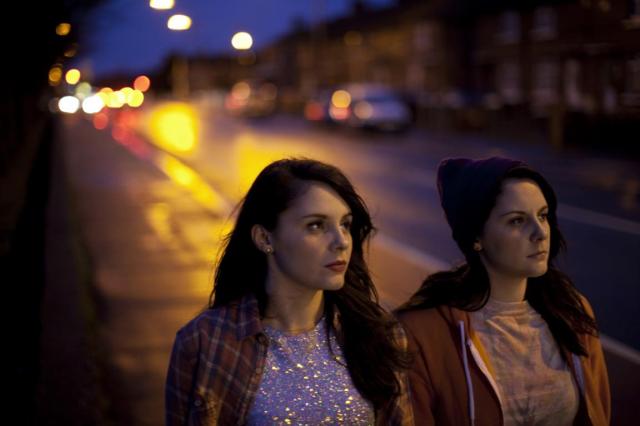 It is the simplicity of Heathers’ early music which makes them so unique. The raw power of their infectious melodies and impeccable harmonies against a single acoustic guitar became a trademark sound which brought them much success on 2008 debut album Here, Not There – a joint release between Irish label Hide Away Records and US label Plan-It-X Records. Initially well received by the indie music community in Ireland, Heathers then spent summers during college touring the United States with like-minded punk-folk band Ghost Mice and immersing themselves in the DIY Scene, which subsequently led to invites to perform at both CMJ and Canadian Music Week. Back home, Heathers were cast further into the spotlight of the mainstream thanks to a seemingly meant-to-be placement of their song ‘Remember When’ on an Irish tourism advertising campaign – bringing radio airplay, TV appearances, and most importantly album sales.

They had established a successful blueprint with their debut album – but for the forthcoming follow-up Heathers have been keen to diversify their sound, by expanding on their use of instruments whilst maintaining all of the distinctive hooky vocal stylings and quirky acoustic guitar-based melodic charm. Last year, a trip to Eurosonic Festival – the European showcase equivalent of SXSW – saw them debut new material performed with a full live band, to widespread acclaim.

From there it was time to start recording the new tracks, burying themselves away in a London studio to bring it all together with producer Max Dingel. Set for release this September, the much-anticipated Kingdom has the potential to be a runaway success for Heathers. The brilliant first single “Forget Me Knots” leads the charge – an impeccably produced anthemic alt-pop anthem, which bears all the marks of being made for the airwaves.

“Forget Me Knots” is now available on iTunes, with I also available to pre-order ahead of its release in September. In the meantime, keep up to date with all things Heathers via Facebook and Twitter.