There’s something about a well matched boy-girl musical pairing that makes my heart sing, and UK-based rock duo Blood Red Shoes are no exception. (Also, my crush on lead singer Laura-Mary Carter is as expansive and never-ending as the universe and just adds to my adoration, but that’s a another article.) For now, I’ll try to focus on the amazing brand of music Blood Red Shoes are building, the awesomeness of their In Time To Voices project, and why we really should pay attention to what this band are doing.

Laura-Mary and Steven Ansell’s musical adventures together began in 2004, when they bonded over their love of punk, rock, garage, indie and sonic youthy-inharmonic tones. Blood Red Shoes’ early singles were bold ventures into a wonderful meld of underground punk, grunge and their own musical grit. Laura-Mary’s simple yet haunting voice, intricate lyrics and raw guitar playing were a complement to Steven’s own backing (and at times lead) vocals, explosive energy and syncopated skills on drums. 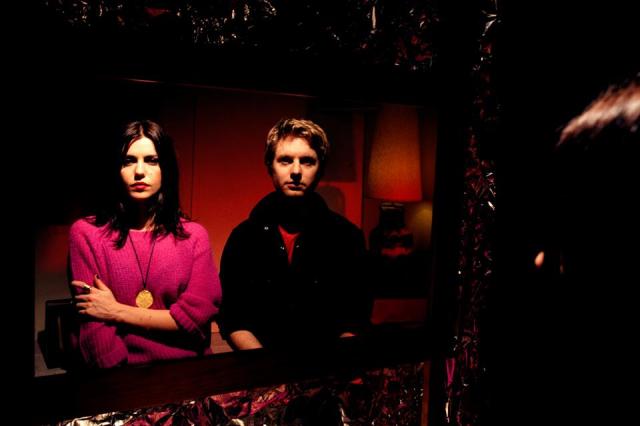 Energetic live shows and solid releases led to more hype building around the band, and Blood Red Shoes quickly cemented their reputation as one of the stronger talented up-and-coming duos at the time. The following years saw the occasional on-stage tiff between the duo, but eight years and two projects later, we find a unified Blood Red Shoes at their most sonically mature; exploring and expanding on their finely tuned talents for their newest album, In Time To Voices.

While their tendency to leap from different types of rock is still present, and the utilization of multiple instruments and obvious punk influences still remain, what is most evident and marvelous on In Time To Voices is the growth of the band’s maturity in terms of song writing and performance. Although the development of their own vocal and musical talents is most impressive, the crowning achievement on this album might be producer Mike Crossey, who refines Blood Red Shoes’ once wild and eclectic sound into sonic gold. The album has a much more cohesive feel to it, their energy focused and arraigned for back-to-back maximum ass-kicking rock tracks. Gone are the days of the long guitar solos from Laura; replaced by lushly produced tracks and Steven stepping in for the most, and best, vocal work I’ve heard from him to date.

The project’s title track, In Time To Voices, jolts back and forth from Laura’s soft vocals and relaxed guitar riffs to Steven’s strong choruses and driving drums; an efficacious introduction to the album. “Cold” — one of the stronger tracks on the project — shows off that awesome production work by Crossey and vocal work by both kids, projecting emotion into lyrics (notably, the hook) than I’ve previously heard from them. The punk rock influence shows up on “Je Me Perds” with Steven taking over lead (and everything else for that matter) for a powerful performance both on vocals and drums. Other key tracks like “Night Light,” “Slip Into Blue” and “7 years” fit seamlessly into the project, making for a well-produced, well-performed rock album that pleases and appeals to my geeky musical aesthetic.

In all, In Time To Voices is another solid showing from a band that deserves your attention. There is a little bit of something to satisfy everyone on this album — if outstanding rock music is what you’re into. Great music aside, what I need from bands is consistent growth and an amazing live show, and these kids provide that for me every time. Speaking of live shows, they’ve only been stateside a handful of times (and in Los Angeles only once — yes, I was there, and it was great), but I am amped to tell you that they have JUST announced another North American tour. Check them out live if you have a chance — it’s an opportunity doesn’t come around often.

If you’re really interested, check out the four part mini-documentary filmed while in the studio creating In Time To Voices. Insightful, hilarious and intriguing for the musical nerd in you. Also, if you’re into Blood Red Shoes, you’ll probably also be into The Kills, Duke Spirit, The Subways, Dead Weather and The Ting Tings‘ latest album.

Ericka is the woman behind one of Autostraddle’s favorite music blogs, Music Nerdery, and can often be found working with the amazing Anita Baker.