WHIP IT!: Really, I appreciate what this self-described “heterosexual man” is trying to do by extolling the gender-subversive values of Whip It’s hidden Lesbian Action in Psychology Today’s Lesbian Fantasy, Disguised, but he’s just a little bit too self-congratulatory about his sudden revelation that there are Lonely Lesbians who must seek Comfort in Girl Power Movies (the lonely lezzies in this article hail from Bovine, Texas — in the interview below this daily fix item, proverbial Lonely Lesbian was located in Iowa. In The L Word, it was always just the Midwest).

I have developed the hypothesis of “Whip It” as lesbian fantasy in disguise, because even if this is not the intention of the filmmaker, it still works on this level, and by functioning on this level it is serving a social purpose above and beyond the gender equality comment that women can make films too.

But, I kinda love that he can somehow get away with saying things like this in a way that feels a lot less clichè than when we say it (or perhaps a lot less like wishful thinking), even when it is kinda stereotype-y.

“The protagonist, Bliss (Page), behaves in the way that a lesbian might behave before she knows she’s a lesbian. We meet her just as she’s playfully dying her hair blue for a beauty pageant. Her inexplicably love for roller derby is incited by the image of three women pushing each other on rollerblades. She dumps her boyfriend with suspicious ease and celerity. She’s an adolescent who likes to be different, is experimental and puts a boyfriend second to roller derby.”

But maybe I’m being too harsh, and should just appreciate this endearing — if clumsy, and self-congratulatory — little trope in a not-exclusively-gay magazine by a dude. Like maybe this is the best thing ever … you tell me! –– especially if you’ve seen the movie, as I totally have not. Like the thing he wrote about roller-blading being a metaphor for top and bottom sex — harmless naivety, or ignorance?

Here’s a video of Ellen Page on Conan O’Brian on October 5th. She says someone called her forehead an alien ship landing pad. 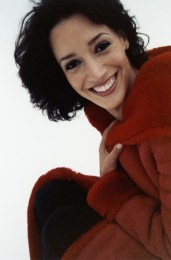 L WORD: Jennifer Beals remains a perfect human in an interview at Matthew’s Place (Judy Shepard’s website), where the interviewer’s”Uh”s were for some reason transcribed but otherwise was an excellent interview & platform for Jennifer Beals to radiate her perfection: “By listening to [the story of a couple who’d never felt comfortable being out during their 30 years together ’til they saw The L Word] and many other stories like theirs I realized it was incumbent upon all of us to live as authentically as we possibly can. Not just for our own sake but for the sake of everyone else as well, because we don’t do anyone a favor by … hiding our candle under the bed.” Seriously read it let’s all get inspired today!

LESBIAN CHEF CAT CORA is interviewed at AfterEllen about her new restaurant, family and charity work.

Carly’s Televisionary is up (in which even vodka couldn’t numb her feelings about Grey’s Anatomy), and also, we have your Autostraddle 2009 Fall Style Guide!

GAGA: Lady Gaga debuted her new single, “Bad Romance,” at the Alexander McQueen show in Paris yesterday. My former roommate was there. But I’m not bitter. At all. Daily Gaga has a clip of the audio from the show. It’s not great quality, but it sounds like typical Gaga, i.e., pure awesomeness. (@dailygaga)

Also, Lady Gaga will be playing herself on Gossip Girl later this season. YAYAY! (@gossipgirlinsider)

30 ROCK: “There’s a new preview of 30 Rock season 4, which starts Oct. 15. The season begins with a search for new talent for TGS because Americans can no longer relate to Tracy and Jenna. The clip also includes interviews with the cast, so you get to see Liz Lemon and Tina Fey, all in one video! Plus, Brian Williams, who I secretly love, makes fun of himself.” – Intern Sarah (@nbc)

THE GOSSIP: Buzznet interviewed The Gossip about their new album, Music for Men. Beth Ditto talks about feminism and Kathleen Hanna! Also, check out Ditto’s crazy cool dress that looks like something Edward Gorey and Jackson Pollock collaborated on. (@buzznet)

SAINTHOOD: If you didn’t get your deluxe pre-order bundle of Tegan & Sara‘s new album, don’t worry. You can now pre-order it on iTunes, which sadly doesn’t get you an ink blot or the books but will get you some bonus tracks!

Join A+
Related:daily fix 1.0whip it