On Wednesday, over 100 people gathered for a rally organized by the Association of Cameroonian Youth to post homophobic signs on suspected gay-friendly bars and to distribute anti-gay pamphlets in Cameroon’s capital city, Yaounde. Just one month after Cameroonian LGBT activist Eric Ohena Lembembe was found dead, the violence against the LGBT population continues to rise.

The participants of the rally marched through Yaounde carrying the Cameroon flag and wearing shirts with anti-gay slogans. They declared it the “Day Against Homosexuality” and claimed it was to honor the death of a student who was “assaulted by homosexuals” and found in a hotel in 2006. The Association of Cameroonian Youth wants to see stricter enforcement of anti-gay laws despite the fact Cameroon already prosecutes the most LGBT citizens in sub-Saharan African. Most of them are arrested, charged and sentenced for up to five years with little evidence of same-sex involvement. 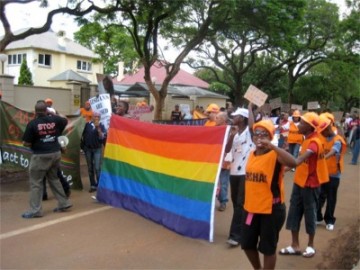 Michal Togue, a lawyer who works in LGBT rights, believes that the government was in support of this rally and noted that many gay activists have been actively receiving threats of violence:

“I have the impression that the persecution of homosexuals is sharply on the rise since Lembembe was murdered. A demonstration like the one today is clear proof. If I tell you I’m not scared, then I’m joking. I’m scared for my security.”

Although Article 347 of Cameroon’s penal code already violates the country’s constitution as well as human rights standards, the organizer of the Association of Cameroonian Youth, Sismondi Barley Bidjocka, says they are pushing to increase the maximum sentence to twenty years in prison. Bidjocka was quoted: “It is a struggle to push the authorities to clearly assert our rejection of homosexuality as a nation, and to increase the punishment.” While the ACY believes current punishment isn’t harsh enough, the daily harassment and violence that Cameroonian LGBT population faces is rampant. 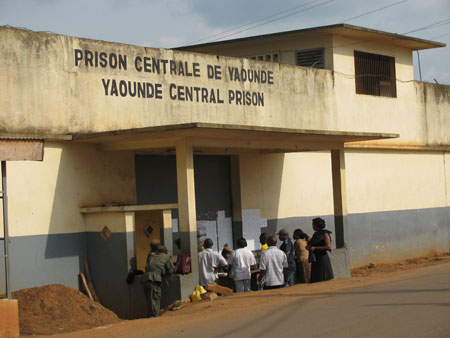 Togue also said that two transgender women were attacked last week in Yaounde, adding to the countless reports of targeted aggression in the city. While police did break up this attack, Togue pointed out that the rally should have also been dismantled, considering that large-scale gatherings are required to have government approval.

The Human Rights Watch outlined numerous cases involved the anti-gay law in a 55-page report, “Guilty by Association,” released in March of this year. Though Cameroon president Paul Biya claimed earlier this year that “minds were changing” about homosexuality in the country, the government has taken no formal action to prevent violence or change the prosecution of LGBT people. Groups like Yaounde-based CAMFAIDS, (which Lembembe was involved with), and Alternatives-Cameroun continue to work to decriminalize homosexuality and pursue equality. Director of Alternatives-Cameroun, Yves Yomb, has put out a challenge to the government to stand up for all citizens: “We are calling on our government to stop waiting around helplessly for minds to change, and instead to show a bit of courage… and [to] inform the public that this is a matter of upholding fundamental rights.”

LGBT rights continues to be a controversial issue throughout Africa; homosexuality is illegal in 38 countries, and in a few, punishable by death. The gay rights and AIDS awareness organizations have staged protests, reached out for international support and as recently as July, AIDs workers have gone on strike. After Lembembe’s murder, his lawyer, Alice Nkom, was quoted: “We are afraid there will never be justice.” As the activists in Yaounde stay consistent in their fight, hopefully the international news coverage and scruntiny will increase the pressure on the Cameroon government to protect all citizens regardless of sexuality.