It’s our 36th Autostraddle Anonymous Sex Toy Review! Over the last few years, sex toy companies and stores have propositioned us, wondering if we’d like to review their toys in exchange for, you know, their toys.

This week, one of our anonymous reviewers looked at the Toyfriend Seti from Good Vibrations. 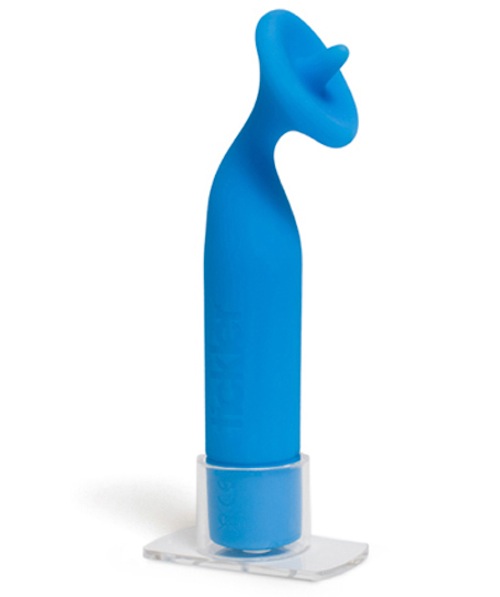 The manufacturer says “SETI Power Toyfriend takes its inspiration from the Search for Extraterrestrial Intelligence project” which is a fun fact.

The neatest thing about the Seti is that it looks like a satellite dish for your clit. The head comes to a tiny point, with a flare around it — a shape that’s perfect for for direct pressure right on, above or below your clit with labia stimulation. It’s the kind of thing you might not know you want until you get it, and it can be really effective.

The tip is slightly too pointy to press down too hard, which is not ideal if you like hard clit stimulation, but turning it over when you’re all revved up and need more from time to time allows for that. (The neck can move around a lot, but the pointy bit is a little firm — if you want a softer touch, turning it over helps there, too.) The flared labia shape is perfect, and is effective pressing down harder — it’s just the point that gets uncomfortable in those moments. It would be better if the point was a little more rounded or had a little more give.

The Seti can be difficult to use on a partner because of the very things that make it awesome on you — the point needs precision, but the flare hides it, making it hard to tell what you’re doing without very specific partner feedback (of the “one millimetre to the left and two down” variety).

Depending on your dildo/harness situation, the head of the Seti is slightly too large and bulky to sit comfortably against you during most strap-on sex. On the other hand, it’s just powerful enough to still be effective if you aim for a general area rather than a specific target, and the size means it can hit the shaft of a strap-on in motion a little bit. Using it along with fingers — yours or someone else’s — for penetration is easy.

The button, of which there is only one, is also on the base, so you’ll need to pick a setting prior to penetration. There are five settings — a solidly intense higher and then a lower flat vibration, short pulses, rapid pulses and really rapid pulses. You hold the button down to turn it off, which takes a touch of getting used to if you’re used to cycling through settings looking for “off.” It remembers which mode you were in between uses. Also, the Seti comes with a nice stand which is rad because it is really weird-lookin’ and pretty, but sometimes placing it in the stand too hard causes it to turn on.

The Seti is fairly firm, silky feeling silicone — as opposed to stickier silicone, it won’t leave you feeling like you need to wash it again it the second you set it down on the bed. Touching it feels really good. With the batteries in, it feels nicely heavy.