This week, one of our anonymous reviewers tried out the Lily 2, sent to us by Lelo.

The Lily 2 comes in three aromas: lavender and honey, rose and wisteria, or bordeaux and “chocolat.” The lavender and honey version, which I received for review, smells like sweetened herbal tea. Tea gets me as hot as the next queer girl, but I’m not keen on having it near my vulva instead of in my cup. And so far, the best thing to be said for the scent is that if your sense of smell isn’t that good, it’s not that noticeable unless the toy is right under your nose. The bordeaux and chocolate, which I also received for review, has a much stronger smell that is recognizably like red wine. I found the smell more noticeable from a distance, but still strongest when I sniffed the toy directly.

According to Lelo’s press release, the scents were selected because they have aphrodisiac properties: “did you know that when we smell lavender it actually increases blood flow to both the clitoris and penis increasing arousal? [A separate press email claims that blood flow is increased by 11%.] Also, chocolate has been considered an aphrodisiac since Aztec times and contains small levels of tryptophan, a building block of serotonin, a brain chemical involved in sexual arousal and also contains phenylethylamine, a stimulant related to amphetamine that is released in the brain when people fall in love.”

I asked Lelo what science the scent choices was based on but have not yet received a response. However, a recent study in the journal Sexual Medicine Reviews found no difference in sexual function between people who eat chocolate and those who don’t. (The authors write, “while it is tempting that chocolate may have some positive effects on sexual function, the myth is not supported in the existing medical literature.”) The same study found no evidence that honey acts as an aphrodisiac, either. Rose, wisteria, lavender or bordeaux were not looked at, presumably because there is not enough legit research about them to qualify; a search of each term along with “aphrodisiac” on pubmed.gov, which the study drew its lit review from, reveals no relevant research at all.

I’m pretty sure that the primary reason wine makes you feel sexy has nothing to do with whether science says it’s an aphrodisiac. And association obviously plays a role as well. Oysters, for example, are not an actual aphrodisiac (according to the study above), but they look like vulvas and taste “like the sea” and also like vulvas, and if you, say, start eating them on sexy dates sometimes, it makes sense that an association between oysters and sex would form, even if nothing particularly exciting is happening according to science.

But even if you ignore the press release and assume the scents are based on perceived cultural association (as one video from Lelo seems to suggest), I have no idea where wisteria comes in, which together with rose seems like it would evoke the cloying florals of a geriatric perfume or maybe Crabtree & Evelyn. Lavender and honey seem like they would evoke tea and not sex. Bordeaux and chocolate do seem to evoke a very specific image of a specific kind of sex — specifically unimaginative kind of gross heterosexual vanilla seduction. None of this does anything for me personally. The best I can say about the scent of the Lily 2 is that I didn’t really notice it enough to have it get in the way.

Which is the thing about sex toys like this, sex toys with a gimmicky idea tagged on: they’re neat, as long as they don’t get in the way of an orgasm. My sense of smell isn’t good enough for the scent to interfere, but I’m not sure this is universal. My initial reaction, and that of the activity partners and friends I got to smell the toy, was not “that’s good,” but “that’s weird.” l love honey. I also love lavender, to the point of having some tattooed on my body. I do not want to smell fake honey or lavender during sex, coming from near my crotch. I do not want to smell fake wine, either.

Scented things that touch women’s genitals also have a history of being shaming. (See this 1932 ad for a “positively non-poisonous” douche for an example.) In a post about the creation of the toy, Lelo’s Katy Thorn writes that it “is in no way designed to alter the taste of a woman (we think that tastes pretty amazing just as it is) but is designed to heighten the mood before, during and after sex.” Still, it’s hard to break that association. 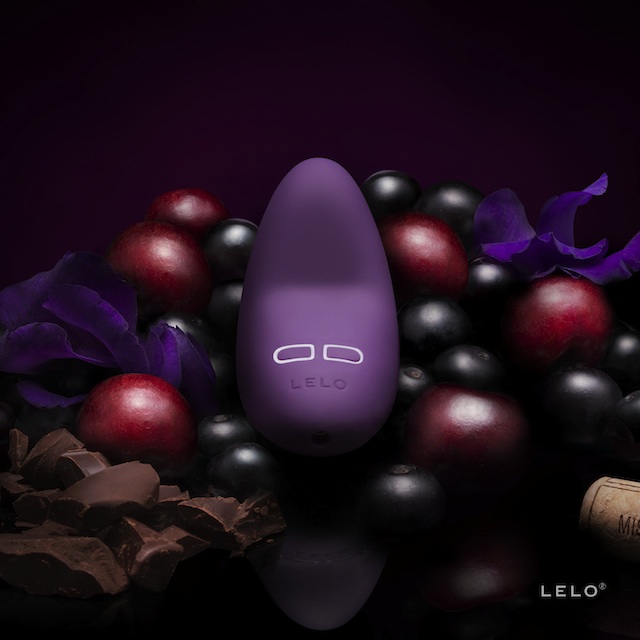 I haven’t owned the Lily 2 for long enough to know how the smell will hold up over time. I can’t help but hope it fades.

So that’s the smell side of things. Here’s the other: even with the weird smell and gag-inducing pale purple color, the Lily 2 is one of my new go-to vibrators based on strength for size alone.

It has a great, easy-to-hold shape that I found nestled nicely against my body or delivered very targeted vibrations depending on how I held it, while being small enough to stay out of the way during penetrative play. Also, those vibrations are strong, and relatively rumbly even on higher settings. So strong and rumbly that the Lily 2 has almost replaced my previous favorite small vibrator, the We-Vibe Tango, without me really noticing. Its battery life is four hours to the Tango’s one-ish hour, and it has a matte plastic that feels good to hold and doesn’t get as slippery when covered in lube, and while it’s not as strong as the Tango, it’s strong enough. Unlike the original Lily, the Lily 2 is waterproof. And it’s fairly quiet, at under 50 decibels.

On the first model I received, I noticed that after a few weeks of use, a few dark spots appeared on the toy, almost as if they were under its surface. The seam also started to split, and the smell of tea was replaced by the smell of electronics. (Lelo told me that, “As far as we know, this was not experienced with other samples,” and sent me a replacement.)

I’m honestly not sure why the Lily 2 is scented — the challenge? Proprietary marketing feedback? Someone got drunk? Nevertheless, if you can get over the smell, or are actually into it, the Lily 2 is a tiny powerhouse that I recommend.