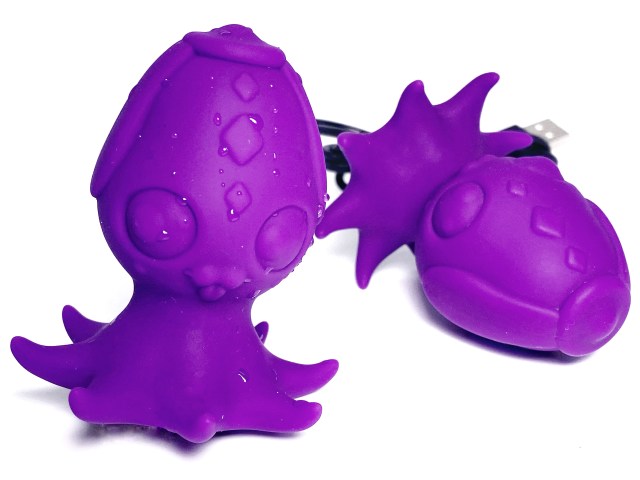 Reviewer 2: I also like the purple! I actually hadn’t realized this before but I have multiple purple sex toys and I think I’ve been drawn to them because the color feels fun but not too cutesy?

Reviewer 3: My first reaction was how cute the toy and its packaging are. It felt nice and I was appreciative that it came with its own rechargeable — rather than battery-operated — bullet!

Reviewer 1: I love that the silicone is slightly textured for a more intense sensation, but it took a while for me to enjoy the vibes. I prefer a butt plug with more of a taper to it for easy insertion, and Princette Puppypus is a little too bulbous for my comfort. I totally understand that a butt plug shaped like a hefty, non-binary octopus might feel more approachable to someone who is new to toys. Toys that look like people or animals don’t really turn my crank (those popular “rabbit vibrators” terrify me), so I had to get past the fact that Princette Puppypus had a face before I could shove that face inside my butt. I appreciate that Princette Puppypus can be used in a variety of ways on all kinds of bodies. However, the toy is decidedly “cute,” which doesn’t align with how Very Serious and Butch I am.

Reviewer 2: I totally agree. And it’s another reason I liked the deep purple because it hid some of the character detail. It’s cute that the toy has a name and pronouns, but, personally, I don’t want to be anthropomorphizing silicone before putting it inside me.

Speaking of new to toys, I would say while not totally new I’m definitely newer, and it’s interesting to me that you also had a bit of trouble with its shape and size. I’d blamed that on my inexperience. But I’ll also add that the tentacles allowed for an ease of use. So while it took some time to get it inside, it didn’t feel challenging to hold or maneuver.

Reviewer 1: This is hands-down (way down… in my pants) one of the most powerful bullet vibrators I’ve ever used. The bullet is small and USB-rechargeable with multiple pulse settings (my favorite!), and I’ll definitely be using it on its own and inside my harness when I break out the ol’ strap-on.

Reviewer 3: OK, y’all are making me want to put this inside me, lol. My only gripe was that it was hard for me to figure out how to charge it, because it uses a non-standard charger, and I didn’t get it right the first time! But I think that was user error.

Reviewer 2: I really like sex toys with multiple purposes. I think it encourages a freedom and exploration that can appeal to everyone and especially appeal to trans people. Part of me wishes it could be a non-binary sex toy without actually being non-binary, but again that’s just a preference. I’m sure some people will feel more neutral about Princette Puppypus or be actively turned on by their personality!

Reviewer 1: I will definitely be using the bullet on its own and in a harness. I probably won’t use the butt plug again.

Reviewer 3: I definitely have to try it for butt play, but that’s not a regular part of my “routine” so I don’t think I’ll be using it a lot. Because of its small size I also don’t think it’d be our primary internal vaginal toy either.

Update: Cute Little Fuckers reached out to us on August 25, 2020 to let us know that since this review was originally published, there have been some improvements to the prototype to make the toy a much more effective clitoral stimulator and general external stimulator in addition to being an excellent internal toy, including: