Despite falling in love with Angelina Jolie upon seeing Girl, Interrupted for the first time at the impressionable age of 12, and despite feeling like I had picked the Gay & Lesbian aisle at Blockbuster clean, I have only just watched the lesbian classic Gia for the first time this week.

And despite the movie being in the lesbian pantheon since before I knew what the words “lesbian” or “pantheon” meant, and despite being professionally queer for quite some time now, these are the only things I knew about the movie Gia before watching it:

Gia is a love story! And I never knew it!

Well, actually, let me back up a little. Because it’s a story about love, but it’s not quite a love story. See, the problem was, nobody loved Gia quite enough, including but not limited to Gia herself. Sure, they loved to look at her, to photograph her, to kiss her, but they didn’t know her, let alone love her.

One thing I love most about Angelina Jolie is her incredible range. She can hold her hornéd head high in Maleficent, or have sure-footed grace in movies like Mr. and Mrs. Smith and Lara Croft, be completely unhinged in an energetic and captivating way in Girl, Interrupted… and then in Gia do a little bit of everything.

What’s funny about Angelina Jolie too is that it doesn’t matter what is happening to her hair or how much makeup is or isn’t on her face. There’s a magnetism to her that has its own aura of attraction that has nothing to do with how she looks. And I think it was the same for Gia Carangi, at least the way she is portrayed here. Take, for example, the very unique hairstyle in the beginning of the movie that is sort of a two-toned mullet? Doesn’t matter, she has an energy about her that makes you want to see what she is going to do next.

It’s easy to believe the agents and the photographers when they say she has something special, even if you know nothing about the modeling or fashion world, because anyone can see it. Her energy is chaotic in a way that seems fun, but she says it clear as day in the beginning, if anyone had been listening: scary people are scary to cover up how scared they are. The chaos is a front.

The person who loves Gia the most is Linda, though she only loves her as much as she can. In the post-mortem interviews they do in the mockumentary portion of the movie, Linda says, “Any time someone tries to tell you exactly who she was didn’t know her at all.” Which ironically is proof that Linda knew her best. 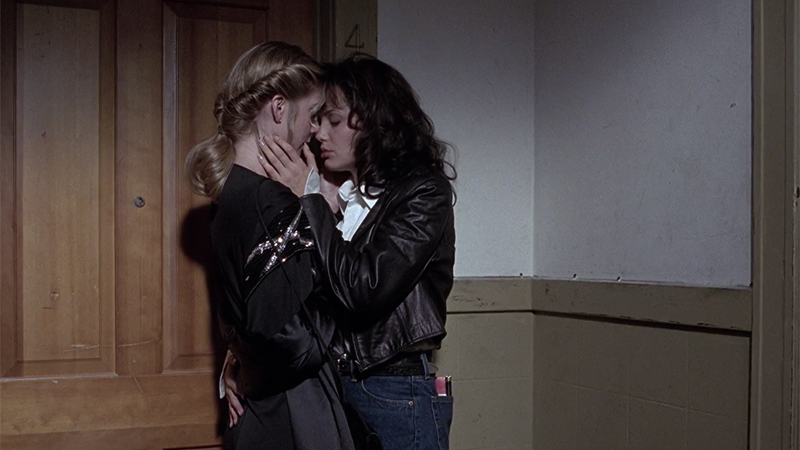 :sings: This kiss, this kiss? Unstoppable.

And Gia loves Linda, too. In the end it isn’t enough. By the time Linda is ready to love Gia as much as Gia loves her, it’s too late. Gia has already been denied love from too many people, or been given a shallow facsimile of love. Gia has already found a way to make drugs fill the holes and is already suffering the consequences of that. (I somehow also didn’t know this movie was about AIDS, though when she started using drugs in New York in the ’80s I suppose I should have guessed that’s where they were going. As I’ve mentioned: this movie is very! sad!)

The movie itself is very of its time; it’s slow and dramatic and plays with stylized scene cuts black and white scenes and slow motion. Haunted noir trumpets reverberate throughout the movie, provoking the feeling of loneliness and empty streets, even when Gia was in a crowded room. Maybe especially so. 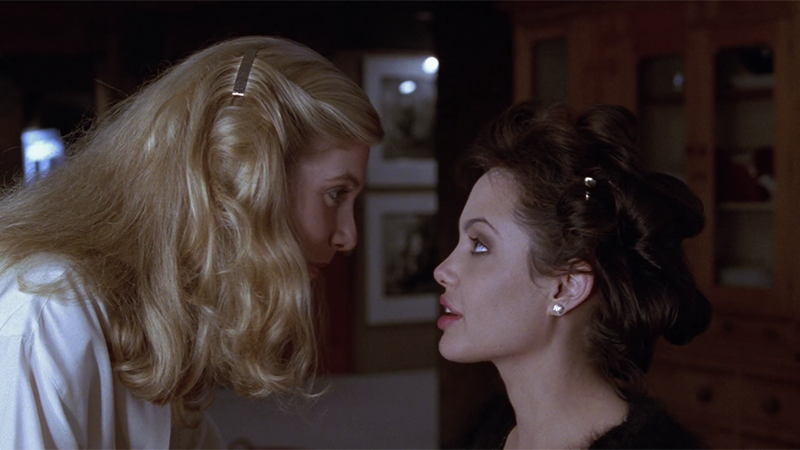 I know chemistry is subjective but I DARE you not to feel it.

Overall, if I’m being honest and putting on my Media Critic Hat, the movie is only okay. Not much happens if you put it down on paper, and some of the plotlines are cyclical. There is a weird dream sequence where she kisses her mother I could have done without; it was perfectly clear she had mommy issues without trying to tie it to her sexuality thank you very much. But the movie does a lot of things right that aren’t always done right even now. For example, before I even knew that it was going to be more than a one-night-stand, I could feel the chemistry between Gia and Linda. It was clear why they liked each other, both parties were uniquely interesting and clearly interested. A lot of times movies will give you a really interesting character and The Love Interest. Also, a lot of movies would have had Linda stay with her boyfriend after her morning-after-gay-sex freakout, both of them convincing themselves and each other that because she cheated with a woman, it was a surmountable obstacle. But even before she was ready to be with Gia, she left her boyfriend. It’s a small detail, almost insignificant, but I appreciated the fact that they set it up early that cheating with a woman “counted” and knew it meant she didn’t love her boyfriend as much as she thought she did.

And even though I knew how the movie was going to end (only because of how the movie began), I was still so SAD when she went to say goodbye to Linda. Especially since you could tell Linda didn’t know Gia was saying goodbye. 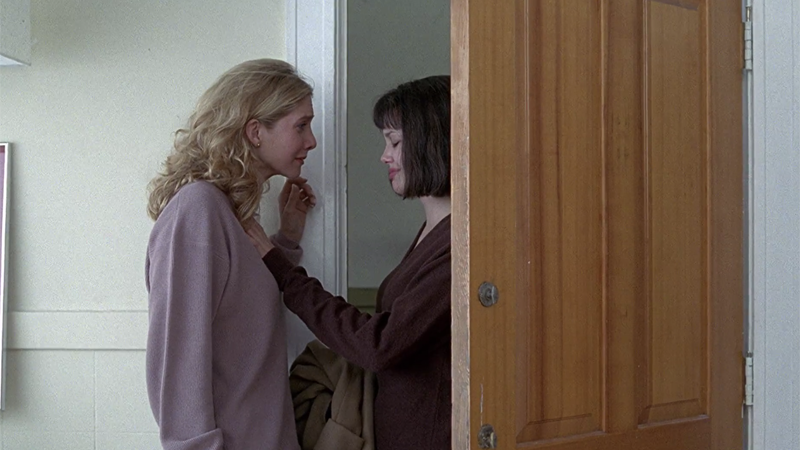 “You’ll be with me, like a handprint on my heart.”

And it was all so sad. Have I mentioned that yet? That it’s sad? There are interviews with the people who were supposed to love her most but barely know her. Every time you think Gia is about to win she gets knocked down again. She goes through so much in her short, short life and it breaks my heart at every turn. And due largely in part to Angelina Jolie (and thus Gia’s) aforementioned magnetism, even when nothing is happening, I am enthralled.

I am so out of the loop about Gia that I honestly can’t even tell you if it’s a hot take to say that I enjoyed this movie. It’s imperfect, and it’s devastating, but it’s based on a real story that was equally as heartbreaking, a story that some writers and directors would have tried to straight-wash but these creators told it in all its gay glory.

Maybe I liked it so much because of when I’m watching it, over 250 days into quarantine, at a time when I understand feeling so far from people. I’m connected to everyone I love through technology but at the same time I feel a heavy, tangible loneliness, a distance from everything, like I’m watching my life from just a few feet to the left of where I should be, just out of reach, held there by an unnaturally strong gravity. Like people are perceiving me through screens and texts, but no one’s actually seeing me. Or maybe I’m not letting them. I ached for Gia deeply.

Then again, I also get swept up in dramatic, artsy, angsty movies and the ambience of them lingers on me for a while so ask me again in a week and see if I tell you Gia is just a long, gay PSA by D.A.R.E. to warn kids about the dangers of heroine disguised as satirical commentary on American consumerism and the price we pay for valuing beauty more than we value the beautiful.

Regardless, I’m glad to finally check this classic off my list, and would definitely recommend it if you haven’t seen it. Even though I will once again repeat the warning I didn’t have (which I acknowledge is my own fault): This movie is very fucking sad!

Join A+
Related:lost movie reviews from the Autostraddle archives