It’s almost the end of 2011, which means that among the year-end lists will be a certain amount of jockeying for “which group has made the most progress.” Who has more rights than they started out with, and who has less? Did we lose electronic privacy rights, but gain economic and financial literacy? This year, one comparison seems fairly clear: the queer community has seen the repeal of DADT and major progress on the repeal of DOMA, whereas more than 80 abortion-restricting laws were enacted across the US in the same timespan. 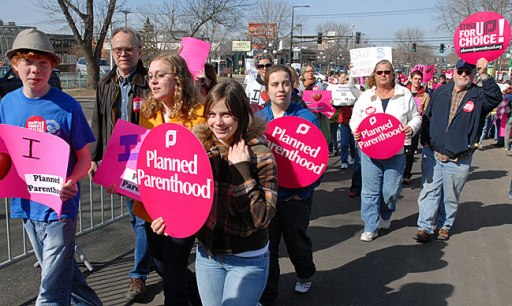 Gay rights and reproductive rights are both divisive issues, but also tend to appeal to the same groups of people, and politicians often support one if they support the other. Why the disparity? At Salon, Irin Carmon makes the case that gay activists have brought pressure to bear on politicians at every level that reproductive rights activists should consider emulating.

It seems that everywhere the Republican hopefuls go, they’re confronted by supporters of gay rights, who may or may not themselves be gay. And every time it happens, their equivocations or evasions or sputtering give birth to another viral moment, primed for Facebook sharing and coalescing around the view that the Republicans are hopelessly out of touch on an issue of growing consensus… You know what I’ve never seen someone confront a Republican candidate about, with maybe one exception? The fact that four of them have signed the so-called Personhood pledge to wholly ban abortion and many common forms of birth control, or that five of them have vowed to defund Planned Parenthood, which provides basic health services to literally millions of women under the Title X program.

Of course, there are some major differences between the struggle for equality for queers and the struggle for women to be able to make their own choices about their bodies — the first fights against a prejudice centered around sexual deviance, and the latter combats the deeply held cultural belief that women aren’t qualified to make decisions about their own sexuality or bodies. While the two issues may seem like concepts both liberals and conservatives should just fall in line on, there may be more complex differences in how the public and individual politicians respond to those two culturally embedded concepts. For instance, the (generally pretty liberal) Religious Society of Friends supports gay marriage almost unilaterally, but also frequently opposes abortion rights because many members feel it constitutes a level of violence that they categorically don’t support. It’s hard to pick apart the extent to which personal experiences and prejudices, both in voters and elected officials, might lead them to support one set of rights and try to take away another.

But perhaps more important than figuring that out is noting, as Carmon does, that “this is not a women versus gay people dichotomy.” Most obviously, because women and gay people are not separate groups; in fact, roughly half of gay people are women, and not-insignificant percentage of women are gay or queer. Queer people also need reproductive rights, and queer women also need access to abortions; they’re not separate issues. An attempt to take away reproductive rights is an assault on all Americans, not just straight women. But it’s also not a dichotomy for a deeper reason: because while you can make the argument that all inequality is interrelated, the oppression of queers and women is especially linked by the disapproval and distaste of the patriarchy. While there are huge differences in the ways that both forms of marginalization are experienced, they’re both based in the belief that people who identify outside of heterosexual masculinity, whether they be straight or queer or trans just cisgendered females, aren’t trustworthy or deserving of agency or power.