On May 8, North Carolina will vote on a state constitutional amendment that would legally define marriage as between a man and a woman. North Carolina has a lot of strong religious communities, and so far controversy over and interest in the bill is high — so far the “turnout for early voting leading up to the May 8 primary election is on pace to top any other primary since the state began one-stop voting in 2000,” according to the News & Observer of Raleigh.

Right now, it would appear that Amendment 1 has more forward momentum than gay rights activists and their allies would like — the most recent poll puts Amendment 1’s support ahead of its opposition by 14 points. It’s not an enormous lead, and one poll isn’t necessarily decisive, but it’s above the 3-point margin of error, and the vote is only a week away. 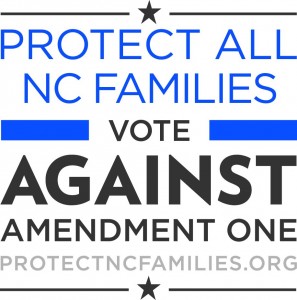 Religious affiliations seem to be playing a large role in Amendment 1’s (projected) success — while some pastors, like Reverend William Barber, asked their congregations to oppose Amendment 1, many other religious leaders in NC are taking the opposite stance. For instance, there’s Berean Baptist Church in Fayetteville, which didn’t just urge their congregation to support Amendment 1, but also to physically abuse their children if they appear to be gay or gender nonconforming:

Religion and religious affiliation have long been discussed as a factor in major developments with marriage equality; it’s long been assumed that practicing (especially evangelical) Christianity and social conservatism go hand in hand. More than just a correlation between the two, however, a new study reveals that there may be a correlation between being “highly religious” and a lack of empathy:

“Overall, we find that for less religious people, the strength of their emotional connection to another person is critical to whether they will help that person or not,” said UC Berkeley social psychologist Robb Willer, a co-author of the study. “The more religious, on the other hand, may ground their generosity less in emotion, and more in other factors such as doctrine, a communal identity, or reputational concerns.”

If the results of this study are taken into account when facing the issue of marriage inequality, it may help explain why people like the pastor of Berean Baptist Church exist, but also raise questions about how the marriage equality movement should deal with “highly religious” states like NC. It’s been well documented that people who have personal contact with even one gay person are significantly more likely to agree that they deserve equal rights; that essentially, to know us is to care about us, at least a little. To that end, a lot of marriage equality activism has centered around the idea of visibility — making gay families seem familiar and friendly, creating a point of connection to the queer community. But if these findings are true, then there’s a large portion of the population for whom that tactic isn’t effective; people who value their religious identity as highly as some leaders in NC seem to may always prioritize what they perceive as religious truth over human connection. And religious doctrine isn’t something one can change with an advertising campaign.

The future of Amendment 1 isn’t necessarily politically urgent — same-sex marriage is already illegal in North Carolina by statute, and the day-to-day reality of living there won’t look much different regardless of its passage. But Amendment 1 might tell us something important about the intersection of the growing momentum for equal rights and America’s cultural stronghold of evangelical Christianity. North Carolina isn’t the only state where politics and religion are hard to separate, and if we’re going to achieve real equality nationwide, we’ll need to win them all over anyway.