Hello! Did you know that here at Autostraddle, we are all constantly trying to write a thing? Sometimes there are too many things and not enough keyboards to write those things. Here’s what we missed this week!

Physicians for Reproductive Choice and Health (PRCH) recently released the fourth edition of their Adolescent Reproductive and Sexual Health Education Project Curriculum, developed and taught by 46 of the top adolescent medicine specialists in the country to improve teens’ medical care. And guess what? They thought about us! The organization has found that (surprise) adolescents suffer when their healthcare providers are ignorant to their life experiences. In response, the curriculum offers dos-and-don’ts for medical practitioners for topics ranging from trans* health to reversing the damage of homophobia to the health of LGBT youth. Videos and Powerpoints abound!

Before we delve into anything else too complicated, let’s discuss the fact that Jane Lynch is the Comedy Central Roastmaster for the roast of Roseanne Barr. Lynch said she has “long fantasized of ripping Roseanne Barr a new one.” In other words, the roast already sounds like it’s going to be amazing.

Brazen: Trans Women Safer Sex Guide, is now available in PDF form. This is a huge deal, as it used to be super hard to find and it appears to be the most (only?) concise, frank and inclusive discussion of sexual health for trans*women and their sex partners. Brazen was written by Morgan M. Page and published by The 519 in December of 2011. Now everyone forever wherever can educate themselves on safer sex! Pass it along. 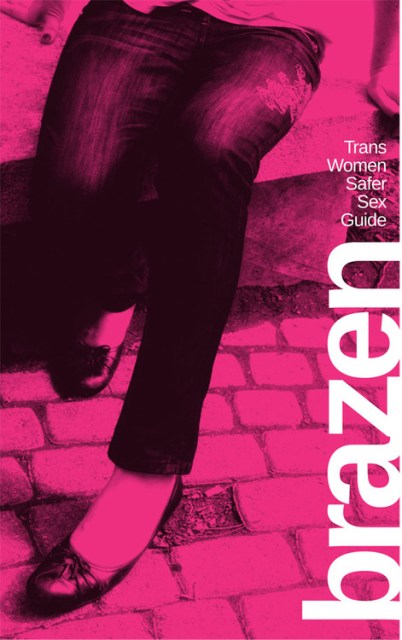 Fred Karger, the gay Republican presidential candidate, ended his campaign on Friday. Although his campaign was hardly close to successful, it achieved an impact in that it happened, after all. And even better — he refuses to endorse Mitt Romney.

As if that wasn’t enough, the DC Republican Committee voted Thursday to adopt inclusive language in their platform via the single Earth-shaking phrase: “We, the Republicans of the District of Columbia support the belief that all individuals, without regard to sexual orientation, are entitled to full and equal protection under the laws and the Constitution and that everyone has the right to be treated with dignity and respect.” Well said.

Maureen Walsh, the Republican who delivered a moving speech on the floor about her support for gay marriage in her home state of Washington, is seeing financial support pour in from gay marriage supporters across the country as she defends her seat. Plus, in addition to gay Republicans there may also soon be a black mormon woman named Mia Love serving the party in Congress – in order to represent her home state of UTAH. Utah, you guys.

But just to keep it a little more real, let’s all reflect on the seven most anti-gay U.S. Representatives for a second. Hint: they’re all Republicans! 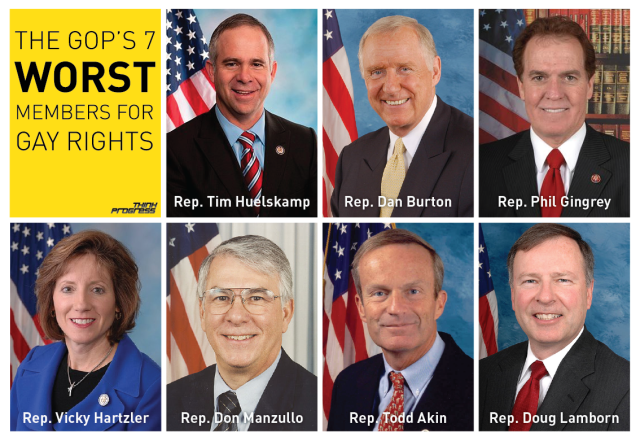 House Armed Services Committee Ranking Member Adam Smith is not a Republican, and last week he introduced HR 6046 – the Military Spouses Equal Treatment Act of 2012 (MSET) in Congress. The bill would alter the standing definition of “spouse” so that same-sex military families can have the same access to benefits that opposite-sex partnerships do, such as insurance and housing allowances. Here’s ten for you, Adam Smith.

When Chuck Norris wrote an opinion piece last week about how President Obama is seeking to create a “pro-gay Boy Scouts of America” and promote a pro-gay agenda (gasp!), GLAAD hit him back by calling him a “fame-hungry has-been” and pointing out that Mitt Romney, whom he endorsed, also advocated for gays to be allowed in the Boy Scouts previously. In larger news: there are people who care about Chuck Norris in the world.

Beginning on July 26, verbal consent will be required for an HIV test in Massachusetts, whereas formerly written consent was required. And if you’re a lesbian in China, all that is now required for you to give blood is your willingness — because the 14 year-old ban on queer lady blood donations has been lifted! (Unfortunately, it still stands for men.)

In news you already knew, bullying has lasting effects. The newest realization to come out of that hard fact? Bullied girls will have health problems in their adulthood.

A box of tissues is in order for the death of Dr. Richard Isay, AKA the man turned psychiatrist / psychoanalyst / activist who made it possible for homosexuality to no longer be viewed as a “disease” in his own medical community. He passed away from cancer at the age of 77 on Thursday.

If you are still depressed about Nora Ephron’s passing, perhaps this retrospective will help you process. Ephron was a journalist who stood her own and then became famous for screenwriting, directing, and producing — most notably for films like When Harry Met Sally and Sleepless In Seattle. These are two of my mother’s favorite movies, just as a sidenote.

This week Rachel Maddow also bared all to Rolling Stone, but only emotionally. Sorry. She opened up to the magazine about her cyclical depression, building on a discussion she began with NPR on the same topic earlier this year. It’s a really great read so you should, you know, read it.

Junot Diaz writes very good books that you would probably also love to read. It turns out much of his perspective on race, which permeates his work (purposefully), was shaped by women of color and their role in the 80’s “gender wars.” His interview with the Boston Review — both parts — are filled with his feelings on race and women. This is a must-read. At one point he described the experience of reading the works of women of color and kind of had a femigasm, I think:

And for me, what was fascinating was that the maps these women were creating in their fictions—the social, critical, cognitive maps, these matrixes that they were plotting—were far more dangerous to the structures that had me pinioned than any of the criticisms that men of color were throwing down. What began to be clear to me as I read these women of color—Leslie Marmon Silko, Sandra Cisneros, Anjana Appachana, and throw in Octavia Butler and the great [Cherríe] Moraga of course—was that what these sisters were doing in their art was powerfully important for the community, for subaltern folks, for women writers of color, for male writers of color, for me. They were heeding [Audre] Lorde’s exhortation by forging the tools that could actually take down master’s house. To read these sisters in the 80s as a young college student was not only intoxicating, it was soul-changing. It was metanoia.

Sarah Robles is the strongest woman in this country, arguably. I argue this mostly because she lifts heavy things for a living and is the United State’s “best chance” at winning an Olympic medal for weighlifting in the upcoming season. This is all of note to you because sexism and the patriarchy have rendered her hard work and dedication so unworthy of financial support that she struggles to eat. (The good news is, she loves herself enough for all of us — and works hard at that, too.) 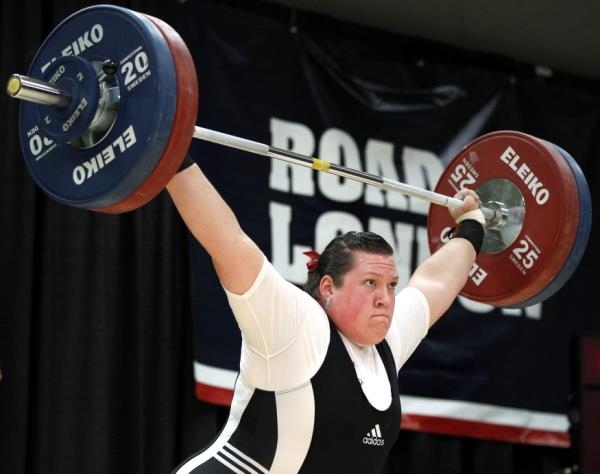