This week I’ll be bringing you all the news that’s fit to publish while Carmen’s in the woods with the rest of the intrepid Autostraddle team making each other cry tears of love and drawing pictures of bears pole dancing and just generally prepping for camp.

This week, Mark Carson was shot in the face after the shooter and the two men with him shouted anti-gay slurs at the victim and his friend. Carson, a 32-year-old gay black man, later died at the hospital. He is the 5th gay man to be attacked in New York in the past 3 weeks. A vigil in his remembrance and a rally against hate crimes were held a few days later.

The Care And Keeping of Queers

Andrea Gibson and Kelsey Gibb are launching their new site, Stay Here With Me, this week; a project to let LGBTQ kids know they’re not alone. It’s currently password-protected, but will be running soon!

Homos & Co. Around The World

In what Rachel accurately described as “something that sounds like a scene out of Amelie but is actually real life,” a French waitress stood on a table and came out to her restaurant.

This week, Brazil became the 15th country (and the 3rd in South America) to legalize gay marriage.

We’ve still got a long way to go in most of the world, though. As a small step in the right direction, the UN put out a PSA about the dangers of homophobia.

The IRS Scandal and You

So it turns out that before the IRS screened Tea Party and Patriot-centered groups, they used to routinely discriminate against LGBT organizations. In one case from 1996, the IRS refused tax exemption status to a a LGBT youth group because the IRS screener said that the group could be seen as “tending to encourage or facilitate homosexual practice and propensities by the young and impressionable.”

And thought NOM wasn’t one of the organizations found to have been targeted by the IRS recently, they’re trying to get their piece of the pie by suing the IRS for leaking documents that show that Mitt Romney donated $10,000 to the group. Sounds like someone’s hurting for cash.

Let’s get this over with fast. First off, people are pissed that AARP likes us. The a judge in Texas ordered a lesbian couple to either live apart or give up their children. And Marco Rubio, everyone’s favorite anti-LGBTQ gang of 8 member, was interrupted during a speech on Saturday by activists who shouted, “Include our families in immigration reform!” Go activists!

Annie Mok and Anna Bongiovanni are teaming up to put on a show called “Body Talk.” Annie will be reading “recent comics from Frank Santoro’s online magazine ‘Comics Workbook’ and elsewhere, that center around the body, memory, sexuality, and trans identity” and Anna will reading some of her work that focuses on “body, rape, and uncomfortable feelings.” If you’re be in or near Minneapolis at 7pm tonight, head to Boneshaker Books to check out their work!

“Bronx-born, Puerto Rican photographer Elle Pérez explores queer identity in rural Tennessee.” What more could you want? I mean really? How about a peek at Radical Transgenderism?

“I arrived at the queer “Faerie” sanctuaries of rural Tennessee two and a half years ago in the midst of an intense gender identity crisis. I was in awe of the residents, as wild and free as the land they inhabited. Barriers between inside and outside space were trespassed in both directions; spectacles usually reserved for early morning hours at queer bars echoed throughout the hollow. It was here that I met Tripp—the first transgender person I knew who rejected the idea that to be transgender was also to be transsexual by default—an encounter that marked a seismic shift in my life and art practice.” 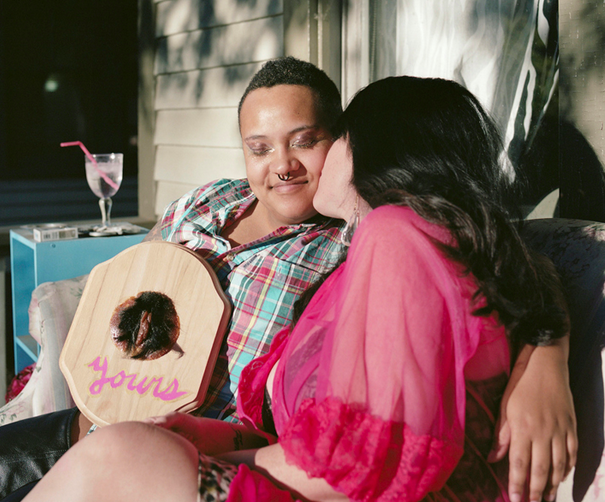 Join A+
Related:alsoalsoalsohomophobiainternational newsyou should go