Hey everyone! As you probably know by now, New York made gay marriage legal last month. It was met with widespread celebration and lots of proposals. Now, the gays of New York will finally get a chance to put on a ring on it this Sunday, when the Empire State’s first same-sex marriages will be performed.

As you can imagine, there is a huge rush to the altar for that first day; many couples have been waiting for years to say “I do.” So New York City is running a lottery for couples who want to be married on the 24th, to knock the thousands of hopefuls down to a more manageable 764. Mayor Bloomberg explains:

We’ve done our homework, and it’s clear that the number of couples who want to marry on Sunday is more than the city clerk’s offices could possibly handle. And the last thing we want is for couples to wait on line for hours and hours, only to walk away upset on what was supposed to be the happiest day of their lives.

However, queer New Yorkers are divided on whether the city’s way of managing things is the right one. Alan Miles of Chelsea thinks it’s “the fairest, best way to ration out those slots,” and is relieved he won’t have to camp out by the clerk’s office; Maria Romagnuolo of Staten Island thinks just leaving the office open would be better, and calls the lottery “a total joke.” My favorite quote on the subject, though, has to be the one from City Council Speaker Christine C. Quinn, who explains: “We want to make sure that Sunday is not like a trip to Motor Vehicles.”

All the official details are here. The lottery runs until noon on the 21st (that’s today!), and the winners are notified the next day. Each borough has its own lottery and its own limit; 400 for Manhattan, 112 each for Brooklyn and Queens, 98 for the Bronx and 42 for Staten Island. Already, 2,661 online applications have been filed, about 1,728 from same-sex couples. Dan Amira from New York magazine has something to say to those other 933:

Hear this, straight people: Maybe it’s convenient for you to get married over the weekend, or maybe you just like the novelty factor of tying the knot on a historic day. But the opportunity means a hell of a lot more for gay couples. Every spot in the lottery occupied by one of you means a gay couple misses out on an experience with much deeper personal significance. This is no way to act, straight people…[it’s] kind of a dick move. And the only dicks at the city clerk’s offices on Sunday should be the ones in the pants of the gay men who are finally allowed to get married, for the first time ever.

But regardless of the gay/straight ratio, July 24th will set the record for the highest number of weddings in one day in New York City, far surpassing the previous record of 621 from Valentine’s Day 2003. Naturally, the New York government can’t help but take advantage of this unique opportunity to sell their state, launching a special tourism campaign oriented around gay marriages. Business partnership NYC & Co is running ads to encourage same-sex couples to come to the city to get married. Upstate, popular honeymoon destination Niagara Falls is also cashing in on the event, with a group wedding ceremony to be held July 25th at Niagara Falls State Park, and a new “Rainbow Romance” travel package. 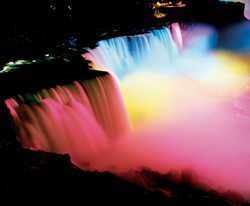 Of course, not everybody is happy about New York’s Big Fat Gay Wedding fest. State Senator Ruben Diaz (D-Bronx), an extremely vocal opponent of marriage equality, plans to rain on everyone’s parade this Sunday with a rally outside of the governor’s New York City office, which he is also marching to the UN building. Diaz says: “We will continue this fight and we will struggle to get what’s right.” What’s perhaps most ridiculous about Senator Diaz’s plan are his stated reasons for why gay marriage is wrong. The New York daily News reports: “Diaz…classif[ied] it as fiscally irresponsible to open government offices on weekends during dire financial times.” Seriously?

On a more interesting note, Episcopal Bishop Lawrence Provenzano of Long Island has ordered that, now that queer New Yorkers can marry, Episcopalian clergy(wo)men must wed their same-sex partners in the next nine months or stop living together. Bishop Provenzano explains that he is only trying to be fair: “I need to be mindful that the church has always asked people to live in committed monogamous, faithful relationships. I won’t allow heterosexual clergy to live in a rectory of church housing without the benefit of marriage.” No other Episcopal dioceses in states where gay marriage is legal have set such limits, though. But Bishop Provenzano has noted that there wouldn’t really be a punishment for those who do not comply, seeming to make it more of a formality than anything.

And one last note: If you’re a New Yorker (or anyone else) getting gay-married, be sure to check out Autostraddle’s wedding giveaway! Deadline July 25th!