Very mild spoilers below for The Half of It.

It’s been sixteen years since writer-director Alice Wu’s debut feature film, Saving Face, a groundbreaking romantic comedy about two queer Asian American women. That means expectations for Wu’s long-awaited follow-up, The Half of It, which premieres May 1 on Netflix, have been sky high for many of us. I’m happy to report that The Half of It lives up to those expectations by both fulfilling and subverting them.

Barely six minutes into the movie, seventeen-year-old Ellie Chu (Leah Lewis) gazes longingly at beautiful Aster Flores (Alexxis Lemire) during choir practice while Aster sings “Annie’s Song” (“You fill up my senses/Like a night in a forest”). But before we get too carried away, Ellie tells us bluntly in a voice-over: “In case you haven’t guessed, this is not a love story. Or not one where anyone gets what they want.”

Don’t worry: If you loved Saving Face, you’re going to love The Half of It. It may not be a happily-ever-after type of love story, but it is about love. 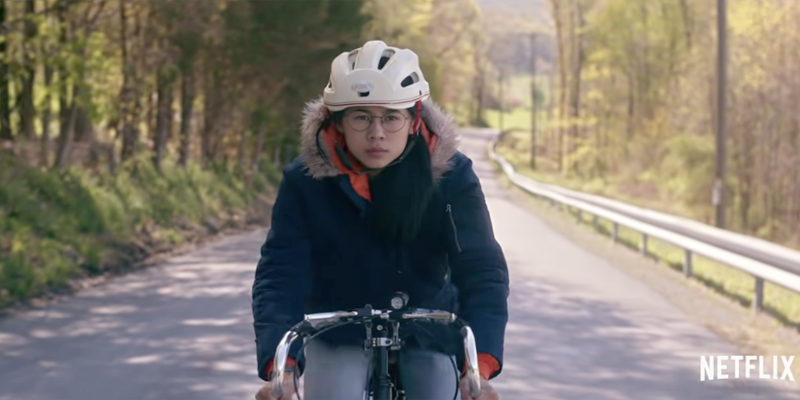 Set in the woodsy, remote, fictional small town of Squahamish, Washington, Ellie Chu is a bookish, tomboyish Chinese American immigrant daughter who helps her widower dad make ends meet by selling school essays to her less bookish classmates. Among those classmates is lovable jock Paul Munsky (Daniel Diemer) and girl next door/preacher’s daughter Aster Flores, whom Paul is in love with.

This is a movie that leans right into these stereotypes and tropes—at least initially. Yes, Ellie is an Asian nerd, and yes, her predominantly white classmates make racist fun of her for riding her bike around town, yelling “chug-a-chug-a-choo-choo” when they see her. Paul and Aster are stereotypes too—until they aren’t. That’s what makes The Half of It work. It takes those expectations and gives them a gentle, loving twist.

It’s clear that Alice Wu is drawing from a variety of influences and cultural touchstones in her script, from classic John Hughes movies to a growing list of ultimately hopeful coming-out films, including Wu’s own Saving Face and, more recently, Love, Simon. It also joins Netflix’s burgeoning lineup of inclusive teen films, such as the breakout Asian American teen romantic comedy To All the Boys, and last winter’s holiday movie, Let It Snow, which included a sweet romance between queer girls.

Many of these new teen films originated in young adult novels, so perhaps it’s not surprising that The Half of It also feels like what the book industry calls “contemporary YA.” This is a category of coming-of-age fiction set in a kind of timeless now, featuring the latest social media combined with an anachronistic affection for ’70s or ’80s music. These stories are populated by often wise-beyond-their-years teens who cross the bridge from adolescence to adulthood via bittersweet first experiences lightened with comedy. 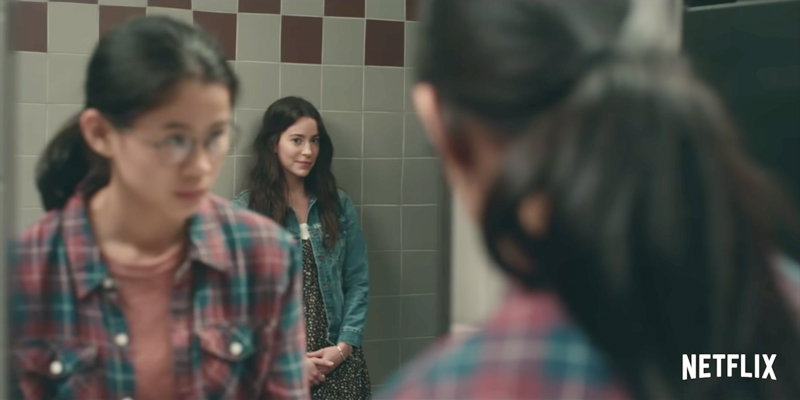 Contemporary YA novels don’t necessarily have happy endings so much as hopeful ones, and The Half of It follows this blueprint, delicately treading the fine line between saccharine and heartfelt with skill — and a few good jokes. The sharp cut from a suggestively vaginal painting to a sack full of sausages made me laugh out loud, as did Paul’s invention of a new food product, the taco sausage.

And no spoilers here, but let me assure you that the Cyrano letter-writing story line is artfully and humorously done, escalating the relationship between Aster and Ellie-as-Paul with just the right amount of teen angst, sarcasm, and slow-dawning realization.

Leah Lewis, whom you might recognize from her role as George in the CW’s Nancy Drew, imbues Ellie Chu with a gruff-yet-vulnerable shyness that’s instantly recognizable to any Asian American who grew up as a nerd. Lewis is a joy to watch, and I hope we’ll see a lot more of her in the future. Daniel Diemer delivers an endearing performance as Paul, whose friendship with Ellie grows in unexpected and touching ways. Alexxis Lemire is a little flat in her portrayal of Aster, but that’s probably because Aster is a romanticized ideal seen from Ellie and Paul’s lovestruck perspectives. She’s not entirely real to Ellie until the very last, surprising scene.

The most emotionally affecting relationship in the film for me was the one between Ellie and her dad, played by Collin Chou. Ellie’s dad’s command of English is poor, and has limited him to working as the Squahamish train station manager rather than utilizing his Chinese Ph.D. in engineering. Ellie’s mother died several years earlier, and her father continues to grieve this loss, shuffling around their tiny home above the station in his bathrobe. This could have come across as heavy-handed, but the story is delivered with a matter-of-factness that prevents it from slipping into pathos. 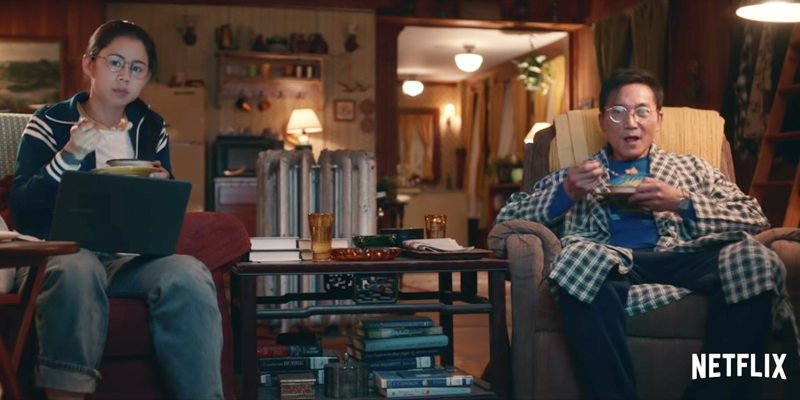 Like Ellie, I’m a Chinese American immigrant who came to America as a child. Like Ellie, I grew up as a nerd in a predominantly white community where I, too, was taunted for being Chinese. I also have family members who came to this country with advanced degrees but no way to use them, because they didn’t speak English well enough. And last but not least, I’m a lesbian. Obviously, there’s a lot for me to identify with in The Half of It. I know that this film will mean a lot for people like me, who have rarely had the chance to see ourselves in any media.

In fact, the last time I saw someone so much like me in a movie was in Alice Wu’s first film, Saving Face. Back in 2004, I was a freelance LGBT entertainment writer, and I interviewed Wu and the cast. I knew the first time I saw Saving Face that it was a groundbreaking movie. Not only for its realistic, loving depiction of queer Asian American women, but because it was just so good.

I was sixteen years younger then, and still at the beginning of writing my first novel, Ash, a retelling of Cinderella with a lesbian twist. But the first draft of Ash, which I wrote around 2004-5 when Saving Face came out, was straight. In that draft, the main character fell in love with Prince Charming. It wasn’t until a friend read it and pointed out that I’d written in a lesbian subtext that I realized the true shape of the story I wanted to tell.

For me, writing Ash was about becoming conscious of what I could do as a writer. It was incredibly difficult for me to imagine a lesbian fairy tale because I’d hardly ever seen queer romances depicted without trauma and intense homophobia. Saving Face was one of the first times I saw it done. That’s why movies like Saving Face are so treasured: they show us what’s possible.

The Half of It does that too, but in a different way. It may not be a “love story” in the traditional sense, but it is about love. It’s about young people discovering what it is, what it isn’t, and what it could be. It’s about searching for your other half and finding that the other half might be within you. And yes, it’s about a queer Asian American girl — still a revolutionary subject for a mainstream film.

I’m so happy that Alice Wu is back with the tender, funny, and hopeful The Half of It. I loved all of it.

Malinda Lo is the critically acclaimed author of several young adult novels, including most recently A Line in the Dark, which was a Kirkus Best YA Book of 2017 and one of Vulture’s 10 Best YA Books of 2017. Her novel Ash, a lesbian retelling of Cinderella, was a finalist for the William C. Morris YA Debut Award, the Andre Norton Award for YA Science Fiction and Fantasy, the Mythopoeic Fantasy Award, and was a Kirkus Best Book for Children and Teens. She has been a three-time finalist for the Lambda Literary Award. She lives in Massachusetts with her partner. Her website is malindalo.com.

Malinda has written 2 articles for us.