The worst thing about your favorite band being from/residing in a country other than yours is that their album comes out way later in your country than it does where they are. So all of your Australian friends get to listen to it, but you’re stuck in America, waiting and waiting because they’re your favorite band, you can’t just pirate that shit! This is exactly how I felt about the Jezabels’ new album The Brink when I saw that the release date was nearly a month later in America. But it was well worth the wait.

I first fell in love with the Jezabels right around when the She’s So Hard EP came out in 2009. To cement you in time, Party in the U.S.A. had just gotten huge and that’s all I wanted to listen to in the car, but my girlfriend would. not. stop playing The Jezabels as we drove up and down the Queensland coast. That’s not usually a perfect recipe for how you become seriously attached to a band, let me warn you, but it worked out for me. When Prisoner came out, I somehow convinced my girlfriend to take me to see them live literally three times because I’m ridiculous. So if I seem biased for this review, I apologize. 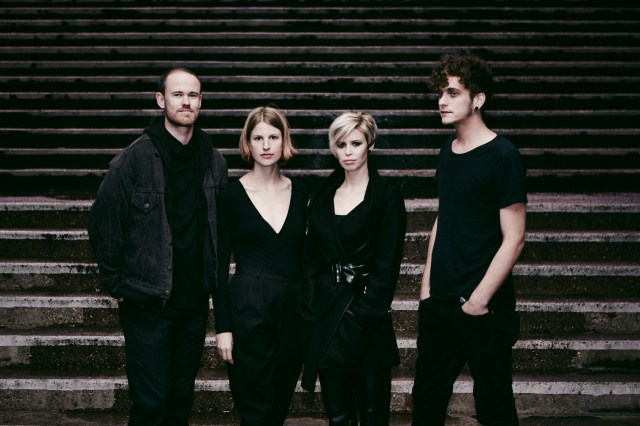 The Jezabels are a four piece band from Sydney, Australia consisting of Hayley Mary on lead vocals (you may recognize Hayley as 76 from our Alternative Hot 100), Heather Shannon on keyboard, Samuel Lockwood on lead guitar and Nik Kaloper on drums. The Brink is their second full-length album and definitely their best work yet.

The Jezabels have a heavy, dramatic, dreamy sound, which they’ve described as intensindie. That’s the best description I’ve ever heard. Their first single off the album, “The End” is the perfect example of the sound of this album (and their entire existence, in my opinion): incredible range of vocals, heavy but not intrusive drumming, catchy guitar.

The quintessential dreaminess of their music is so prominent on this album, I think it’s my favorite thing they’ve put out so far. Some songs like “The Look of Love” and “No Country” feel like a refreshing update to their typical sound, but other songs have a completely new feeling, like the ethereal “Psychotherapy” or the heavy synths in “Beat to Beat.” There’s a lot of dark tones in this album, but Hayley Mary’s damn-near angelic voice saves it from being an album that’s going to make you wallow in self-pity like a lot of heavy albums tend to do.

It took me two listens to love this album completely. I still have no idea what Hayley Mary is singing about in most of these songs, to tell you the truth. But that’s pretty typical for the Jezabels, so I’m not too worried about it. And I’m pretty much a fan of any band that makes a W.B. Yeats reference in a song.

I’d definitely recommend this album as an introduction to the Jezabels but also as a great addition to any Jezzie fan’s collection. It feels polished and marks a point in the band’s career where they seem really confident in their sound and style. I just tried to list out my favorite songs or recommendations for a first listen, and I honestly started listing every song (start with the two singles above, they’re a great intro!). The Brink is definitely a solid album from a great band.