On June 26th, people in same-sex and queer couples and their allies celebrated across the U.S. upon learning the Supreme Court had formally legalized marriage equality.

But for some folks, the celebration rang a bit hollow.

“It was like we were living in this alternate reality, where the north was celebrating and down here in the south we were wondering what the fuck was going on,” said Hali Felt. She and her partner Jennifer Kenney went to the courthouse in their home county, Tuscaloosa County Alabama, on that historic Friday, and their application for a marriage license was soundly rejected.

“We knew going in that we weren’t going to actually get the license on Friday but we wanted to go because we felt it was important to push,” Felt said. “When we actually got the ‘no,’ we underestimated how it would feel emotionally. It was a humiliating experience.”

Felt and Kenney kept fighting, and on July 1 their county began issuing marriage licenses to all couples. 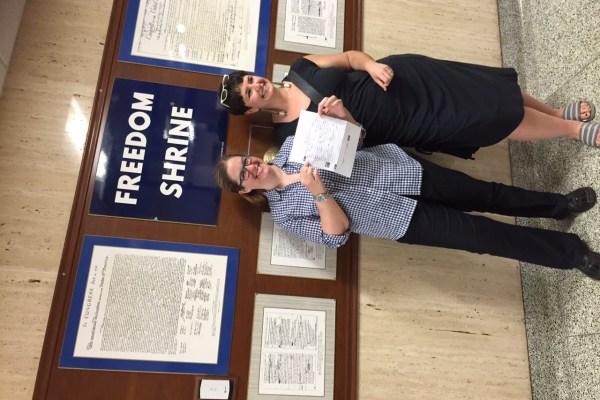 Hali Felt and Jennifer Kenney were the first same-sex couple to receive a marriage license in Tuscaloosa County, Alabama on July 1.

But six weeks after the ruling, 13 of Alabama’s 67 counties are refusing to issue licenses to any couples — a move that is technically legal, because current Alabama law states probate judges “may” issue marriage licenses, not that they “shall.” A bill has been put forth to change that.

Equality Alabama board chair Benjamin Newbern notes that while these counties are not legally discriminating, “they are doing a huge disservice to their constituents and losing tens of thousands of taxpayer dollars.” 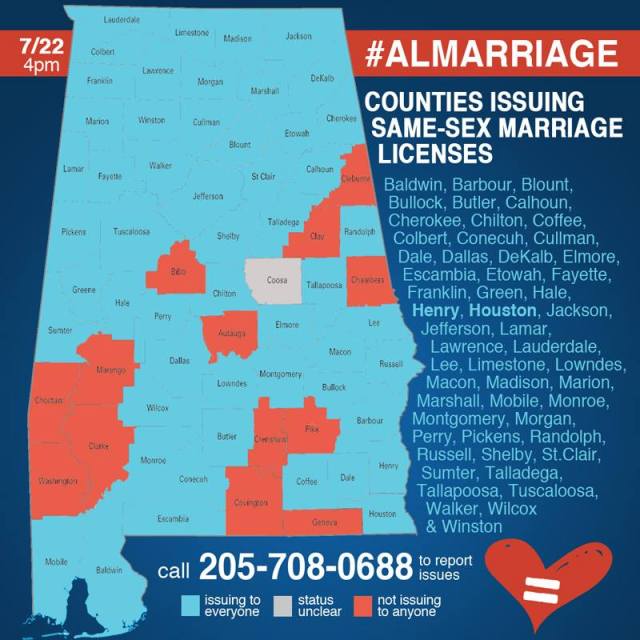 via the Campaign for Southern Equality

Other southern states, including Louisiana and Mississippi, were vocally resistant to adopting the new law of the land. And in Texas, two of its 254 counties — Hartley and Irion — continue to indicate that they will not comply with the ruling. No one in those counties has applied for a license, according to Equality Texas. In Kentucky, Rowan and Casey counties are still discriminating. The result of a lawsuit in Rowan County is expected next week, while no suit has been filed in Casey County, according to Freedom to Marry.

Even if the numerable impact of Southern counties’ refusal to comply seems small, the symbolism is huge to Southern couples. Legal change does not necessarily equal cultural shift, and for every Southern county that is still non-compliance, there are dozens more where county clerks are reticent to provide licenses, where married queers have neighbors and co-workers who harass them instead of celebrate with them.

Discrimination continues even in death, like in the Texas case of a man who wanted to update his husband’s death certificate and was initially denied. John and James Stone-Hoskins married lawfully married in New Mexico last year, but when James died in Texas in January, the state refused to recognize John as the surviving spouse. A judge has now ordered that the certificate must be corrected. 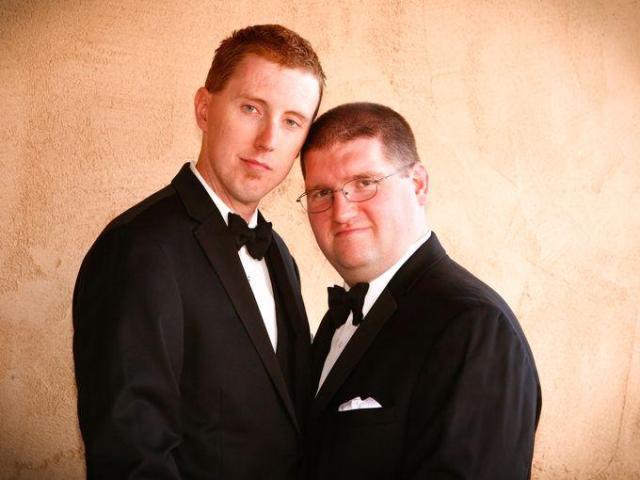 These failures are indicative of broader cultural resistance to fully incorporating LGBT and queer people into all areas of the law and public life. In Alabama, “LGBTQ people are not a protected class. People can get married on Sunday and fired on Monday in Alabama,” said Susan Watson, the executive director of the American Civil Liberties Union of Alabama. In the south, LGBT individuals and couples are more likely to face housing, employment and healthcare discrimination, experience high rates of violence, and have low rates of access to social and community services designated for their needs.

Felt and Kinney, who moved to Tuscaloosa about a year ago from Pennsylvania, said they were lucky to find a lot of support in their neighborhood and from their employer, the University of Alabama, where they are both professors. They celebrated with a potluck wedding on their front porch — “We wouldn’t be relegated to the backyard,” Kinney said — and were featured in the newspaper with a positive story. Friends and strangers have been encouraging.

“Like, a woman was walking her dog and said was that you in the newspaper? You go girls!” Kenney said. “I don’t think we’ve had any negative interpersonal interactions, it’s all just been systemic sluggishness.”

That systematic sluggishness is still affecting people in Alabama and throughout the South who wish to exercise their legal right to marry, and it’s important to recognize and combat that inequality.