In 1996, Kathryn Lehman was part of the team that helped write and pass DOMA. A longtime GOP staffer, it seemed like only one step in her career with the party. But today, although still a GOP lobbyist, she’s working to repeal DOMA — because since 1996, she’s come out of the closet.

In 1996, Lehman was engaged to a man. She wasn’t even out to herself. Based on what the public perception of gay people dictated at the time, it didn’t seem possible that she could be a lesbian. “The view of gay people… it wasn’t Ellen [DeGeneres]. It wasn’t Neil Patrick Harris. It was kinky sex and women riding around on motorcycles without shirts on.” Perhaps most shockingly at all, at the time, Lehman says that DOMA didn’t even seem controversial. Since same-sex marriage didn’t feel like it was a real possibility, banning it didn’t seem like it would make any difference. Heartbreakingly, Lehman now says “she and her colleagues working on DOMA didn’t think it would do much harm.” 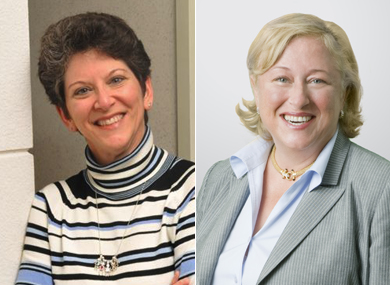 Since then, Lehman has divorced, gone through therapy, come out, and has been with her partner Julie Conway since 2004. In the rest of the country, marriage has been legalized in a healthy handful of states, gays can serve openly in the army, and even Lehman’s colleagues in the GOP didn’t really take issue with her relationship with Conway. “They were like, ‘Well, tell us about Julie. Is she a Republican?’ I’m like, ‘Yes.’ And they were like, ‘Oh, okay,'” she says. “Honestly, that was it.”

Much about Lehman’s story mirrors that of Ted Olson. Half of the lawyering team who’s championed the cause of equality in court by arguing against Prop 8 is a Republican, and in fact was George W. Bush’s solicitor general. But when he looked at the issue of gay marriage, he still felt like he was watching something happen that was contrary to his beliefs. And in fact, Lehman says it was reading one of his briefs from 2009 that helped her come to her decision to oppose the legislation she helped create. Now Lehman is working with Jo Deutsch, a lesbian, liberal Democrat and federal director of Freedom to Marry, to talk with Capitol Hills staffers about repealing DOMA. She and Deutsch have little in common besides their desire to remove the ban on marriage — Lehman is still an active conservative — but they’re a force united on changing the legal landscape for gay couples in the US.

When Lehman originally helped to create DOMA, the reality that it worked towards felt like a foregone conclusion. Even a gay person (even if she wasn’t sure she was one at the time) didn’t think there was any real argument to be made against it. But not even twenty years later, the situation looks radically different. Looking back, Lehman says “the great threat” they were all worried about never materialized… Asked what they were so afraid would happen if gay people got married, she says she wasn’t really sure.” And now, even the people who worked on DOMA but haven’t experienced a radical shift in how they identify have begun to rethink their position. In an op-ed for the LA Times, Bob Barr, another DOMA architect, argued that “DOMA is ‘neither meeting the principles of federalism it was supposed to, nor is its impact limited to federal law.'” He now supports the law’s repeal as well.

DOMA’s repeal no longer feels like an impossibility — Lehman reports that Republican lawmakers have “told her privately that they support repealing DOMA but don’t feel comfortable saying so publicly because they’re worried about getting re-elected in November.” When DOMA finally and inevitably ends, it will mean a world of difference for gay families and couples all over America. But there’s already been a world of difference made regarding the public perception of gay people and the rights we deserve as Americans, or else the current conversation over DOMA wouldn’t even be possible.  Lehman in 1996 couldn’t imagine the world we have today, and now she’s working to make sure that kids born today won’t be able to imagine a time when their queer families meant they were treated like second-class citizens. And the work we’ve done as an entire community over the last 20 years is the reason why, so when DOMA is finally gone, it will be thanks to us all.