In February I was a part of Indie Train Jam, a 52-hour game jam that takes place entirely on the Amtrak California Zephyr train between Chicago and San Francisco. For the first time in Train Jam’s history, the entire train was booked out for the Jam: about 300 people from around the world with differing skill sets came together to create 80 games under the theme of “Unexpected Anticipation,” covering everything from the Travel Ban to entertaining alien guests to dentistry.

A significant number of Train Jam attendees, including myself, were queer and trans women and non-binary people. Whether through choices in game design or getting to know other Train Jammers, many of us found Train Jam to be an amazing opportunity to express our identities, learn new skills, and build valuable community. 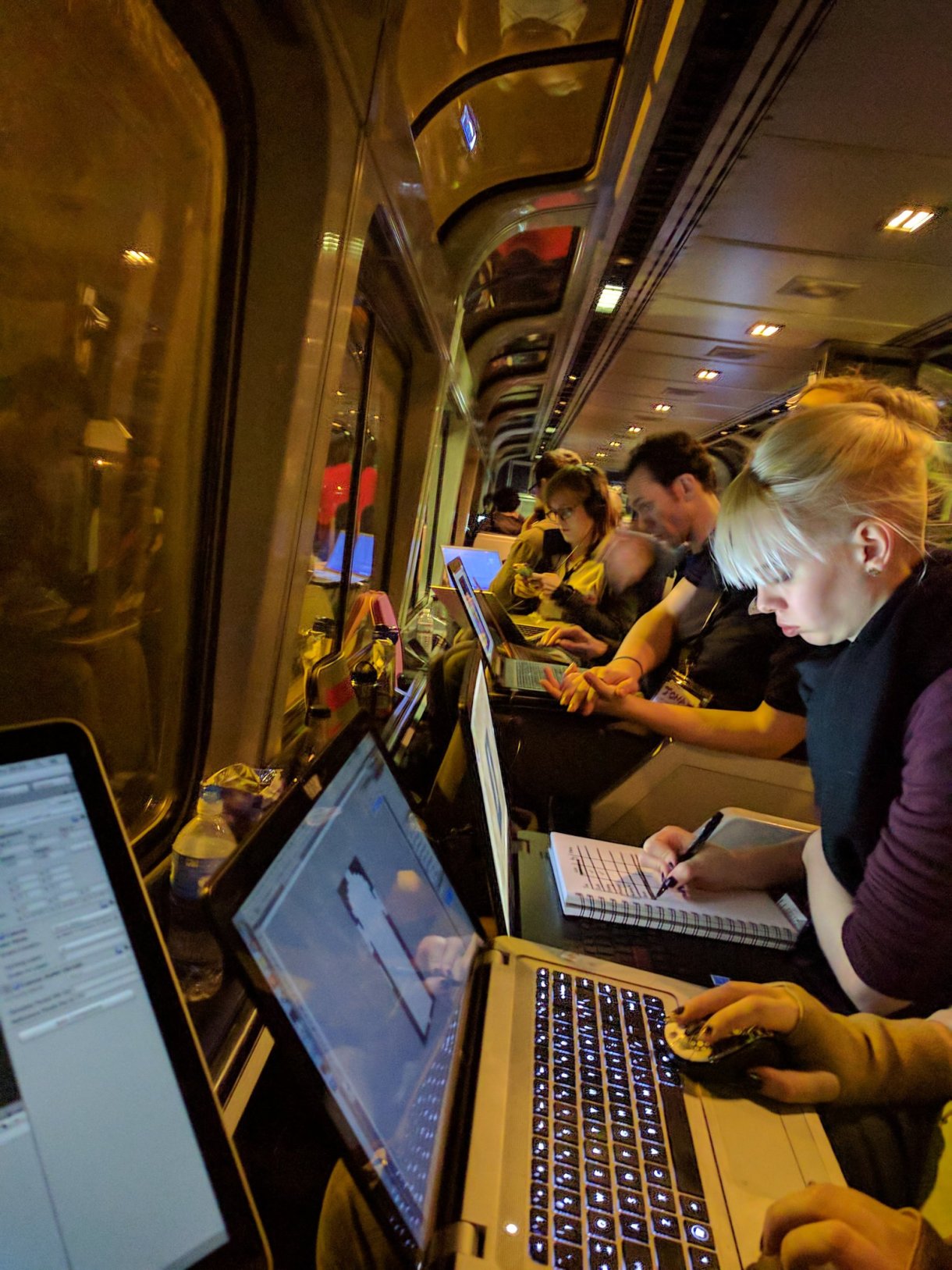 Montreal-based game designer, developer, writer, artist, streamer, speedrunner, and queer trans woman Alex Zandra Van Chestein had queer representation in mind when designing Entertain My Alien Friends, I’ll Be Right Back, where players direct a party full of aliens to specific spots in their alien friend’s apartment based on their needs, such as food or music. “I made sure that the aliens weren’t gendered and that your alien friend (seen on the title screen) was queer-coded,” she explains. Van Chestein is committed to incorporating queer representation and diversity in her games: “I firmly believe that we as content creators can change the world, even just a tiny bit, by making more of what we want to see in it.”

Elie Abraham, a music-making, sound-designing, and voice-acting superqueer from a mixed background in Helsinki, Finland and one half of game design studio Ian & Elie, had their hands full on Train Jam after bouncing around the pre-boarding meeting room with a sign stating “I WANT 2 MAKE MUSIC 4 UR GAME.” 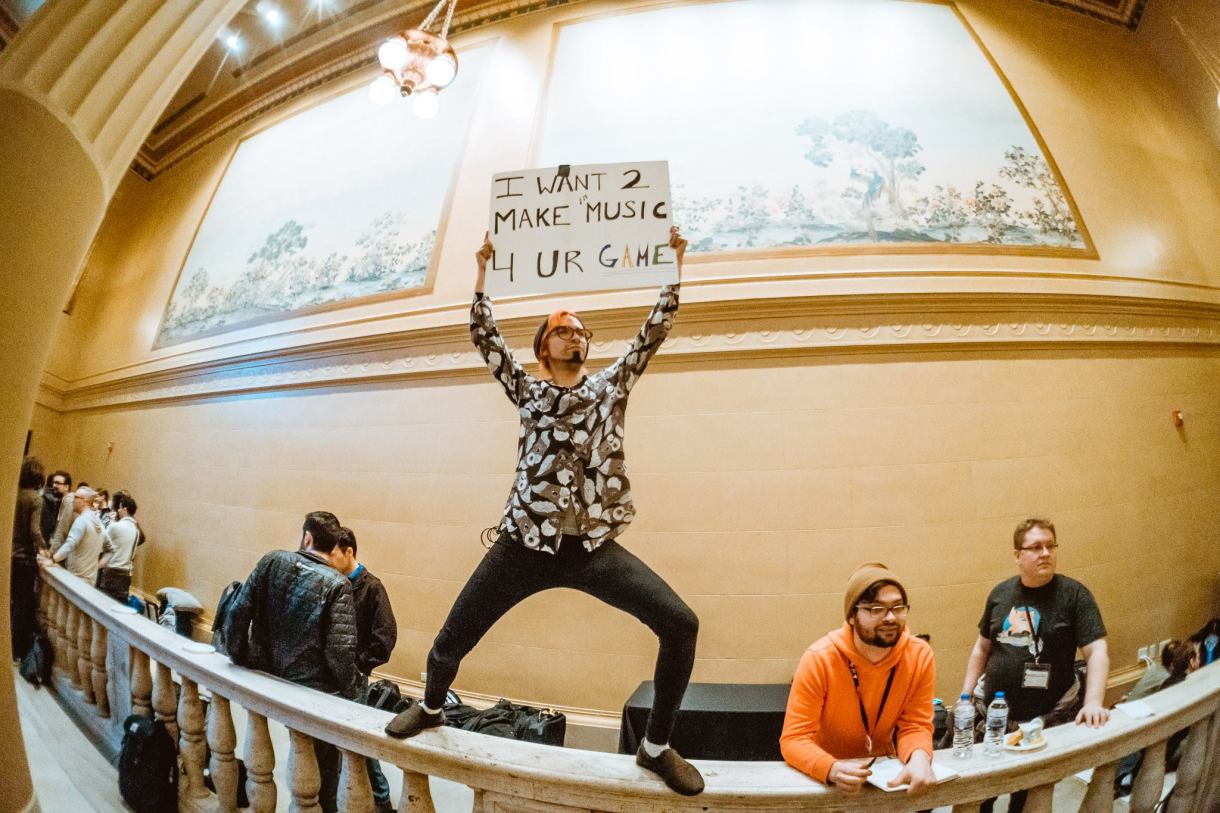 Elie Abraham and their sign. Photo by Robin Baumgarten

It lead them to creating music and audio effects for nine Train Jam games. These games ran the gamut in style and genre: from Metro Mori, taking place in an afterlife that resembles a train station, to Ghost Dentist VR, a virtual reality dentist game, to Sewer-Vogue whose premise is: “In the grim darkness of the future, there is only… competitive catwalks featuring scavenged junk.” For Abraham, who heard about Train Jam from their business and design partner Ian Sundstorm who attended the 2016 Train Jam, their identity primarily came into play through the experience of Train Jam itself, interacting with other Train Jammers who may not necessarily be familiar with non-binary identities.

“My identity was a big part of my Train Jam experience because it’s just generally very much in my day-to-day,” Abraham explains. “We don’t live in a time when one can casually be non-binary with no consequence.” According to Abraham, they were “pleasantly surprised” at how open other Train Jammers were to respecting their identity, checking in about language and sending sweet messages of support. They also enjoyed building connections with the other queer, trans, and non-binary participants on Train Jam. “I felt very much like my people were all around me. I didn’t have to clique up with the other queers because we were all in one big queer-friendly, game-loving train. We flock to each other even when we don’t try, haha.”

Paige Ashlynn, a trans femme games developer based in Seattle found Train Jam to be a refreshing and amazing opportunity to work with other queer and trans developers. “I’ve spent years working in games with cis het white guys. For Train Jam, my goal was to work with people more like myself. My team was 100% LGBT and 75% trans women and included a queer developer of color. This by itself was an amazing experience.” Like Abraham, Ashlynn deeply appreciated the time spent with other queer and trans developers from around the world, some of whom she had known via social media but were meeting in person for the first time. “It was a wonderful moment of human connection and career validation for me.” 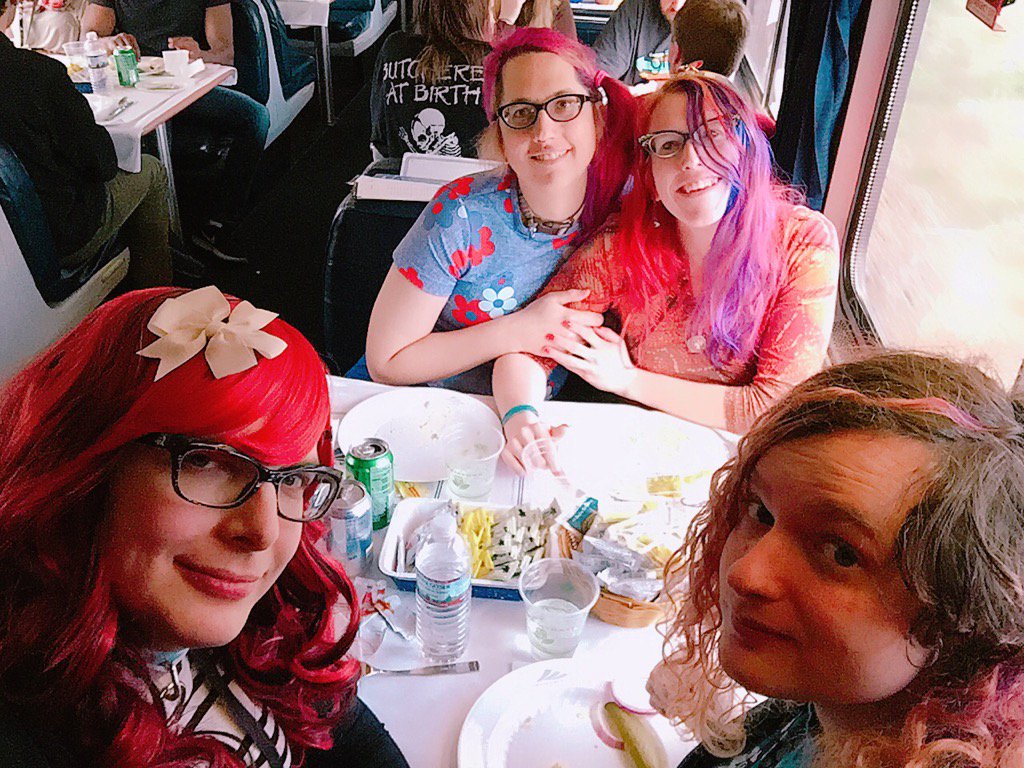 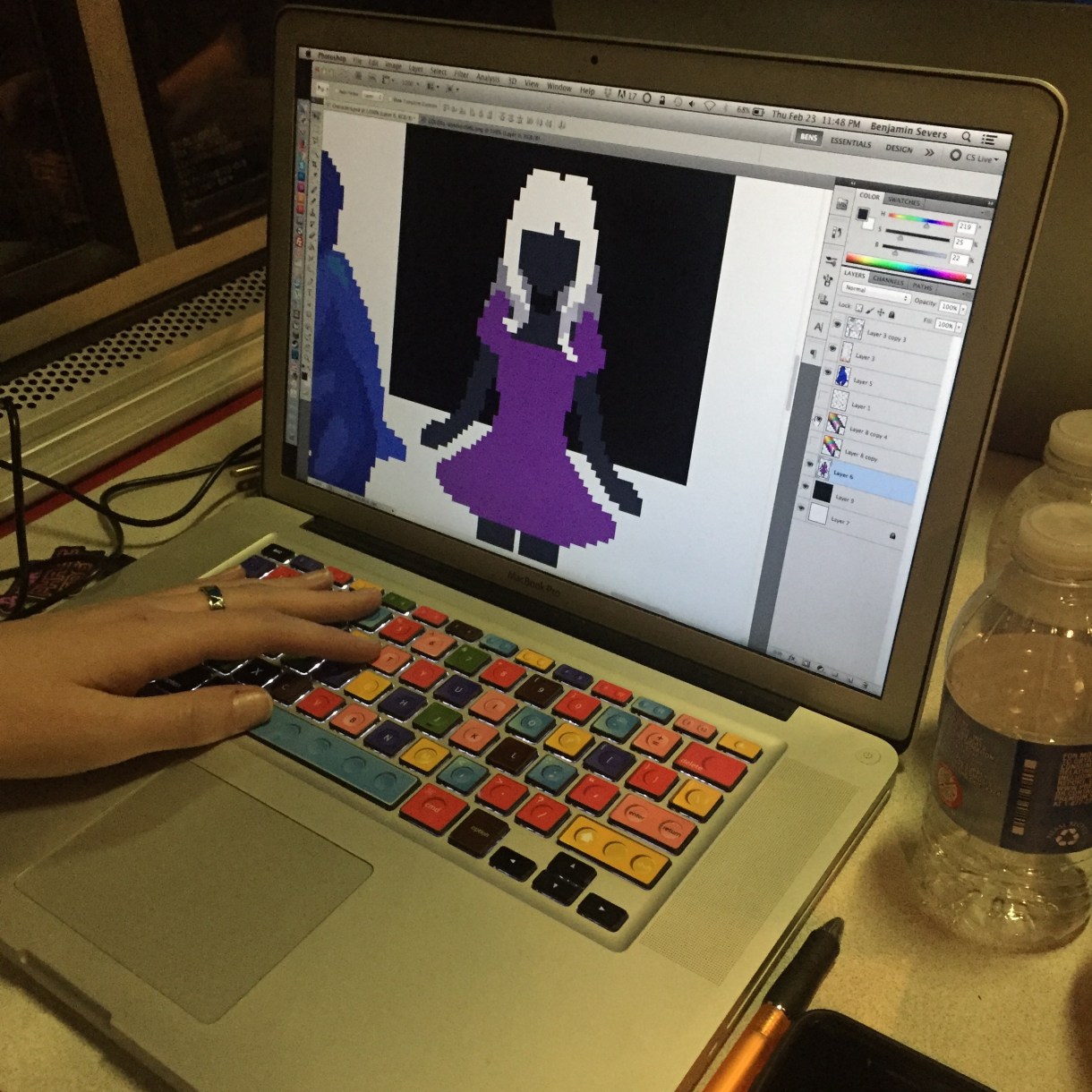 I found Train Jam to be surprisingly affirming of my identity and life story — not just of my gender or sexuality but also of my immigration history. My ability to attend Train Jam was nearly threatened by Trump’s election and the Travel Ban since I hold a passport from a Muslim country and have a Muslim name. Preparing for the absolute worst (including leaving behind emergency contacts, personal information, and instructions to a group of friends and family known as the Safety Team in case things went completely wrong), I crossed the US border with a lot of trepidation and anxiety…and, by sheer luck, absolutely zero incident.

All that angst was then channeled into writing and co-designing What The $!#&@! Do They Need Now, where the player is packing for a trip overseas while their television rattles off news about changes to immigration requirements leading up to the Travel Ban, a protest, and a lawsuit. My fellow Train Jammers were very supportive of those of us facing possible immigration setbacks (we lost an Moroccan Train Jammer whose visa was denied; meanwhile Sudanese/South African participant Ahmed Elgoni was interviewed by Polygon about his potential issues with US immigration — he too managed to attend without drama) and also gave their support to my game — and in turn my story.

Beyond Train Jam, all of us were committed to and passionate about the intersections of games and queerness, both within the narrative and world of the games we played as well as amongst the people involved in games development. Like my experience making games about immigration, Abraham wanted to see many aspects of their identity and values represented in games, not just their gender or sexuality. “I’m a sex-positive, non-monoamorous, vegan, game-making genderqueerdo. I want to see gender roles played with, relationship structures messed about with, animals made important (and not just as playable characters or attack companions; how often do you play a quest/mission about saving animals vs one about slaying animals?).”

Ashlynn’s career goal, as described on her LinkedIn profile, is “to enrich lives through media representation of marginalized people”. In pursuit of this goal, she has worked on games both at game jams and in professional settings that “explore some facet of play that is ignored by mainstream producers” — such as the high school mystery dating sim LongStory or cyberpunk narrative-based adventure game 2064: Read Only Memories, both of which feature LGBT primary characters and are made by LGBT developers. “I [also] prioritize events like GaymerX, QGCon, Lost Levels, GeekGirlCon, and IndieCade that allow me to interact with other likeminded developers.”

Most of the participants of Train Jam, including myself and my interview subjects, were en route to the Game Developers Conference (GDC) in San Francisco, the largest conference for the international games industry. Our opinions were mixed about GDC’s openness towards queer and trans developers, especially in light of Gamergate and other related abuses towards women and LGBTQ people in games. There were some efforts towards inclusion, such as the pronoun ribbons available to all attendees that included They/Them pronouns, as well as the significant win by the queer and trans creators of kinky queer erotic visual novel Ladykiller in a Bind at the Independent Games Festival Awards, where they snagged the Excellence in Narrative award. Even so, as Abraham notes, “there is always room for more.”

“POC and queers are inherently disadvantaged and especially in a post-Gamergate world, I want to see non-POC and non-queers get aggressive in bringing that hate and poisonous behavior down and out of our communities,” they explain. “In a world with ‘fake news’ and the ‘alt right,’ when GDC takes place in ‘Trump’s America,’ the voice of people and groups with influence can have a major positive effect for all of us living in these crazy times and can even help keep marginalized people out of danger.” 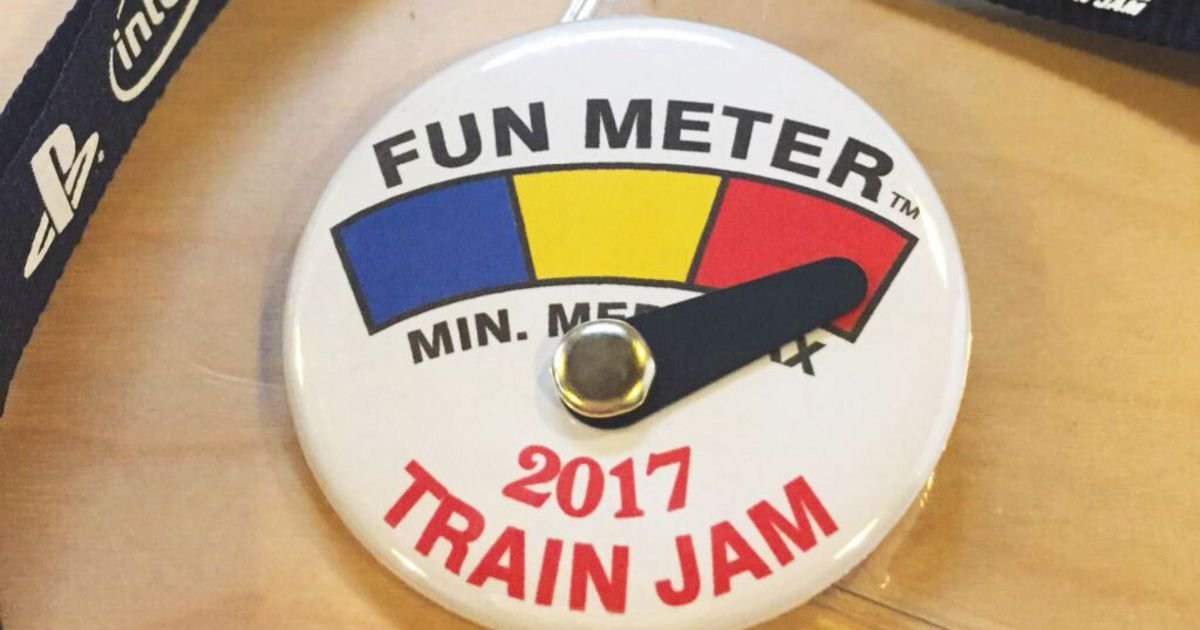 “GDC […] has problems of affordability and accessibility that are not yet being meaningfully addressed,” says Ashlynn. Passes alone cost anywhere from $200 to $2500. Van Chestein agrees, noting: “So many queer creators are struggling, yet making such amazing creations. There should be more support across the board (monetary, visibility, protection, etc.) especially considering how GDC is one of the most expensive events to attend, and already so indispensable as an independent gamedev considering the connections made there.”

All of us were very happy with our Train Jam experience and look forward to attending the next jam in mid-March 2018. Ashlynn, like myself, was a recipient of a Train Jam diversity scholarship (offered to gender minorities and/or people from underrepresented locations) and we were both grateful for the opportunity. “On the one hand, it was validating — helps to combat the imposter syndrome when I recall that I’ve taken part in such a prestigious event,” says Ashlynn. “On the other hand, it literally enabled me to go. I would not have been able to attend if the outreach program had not picked up the price of my ticket.”

However, Train Jam 2018 may be in jeopardy, no thanks to Trump. Trump’s proposed budget cuts to the Department of Transportation would include cuts to funding for Amtrak, threatening 15 national routes including the California Zephyr, the route followed by Train Jam. The National Association of Railroad Passengers is calling on the public to contact their representatives to fight against the proposal, which would affect around 144.6 million Americans, especially those in more rural or regional areas for whom rail is the only major means of interstate transport. Train Jam’s organisers are aware of the measure but have not publicly stated anything about how Train Jam will be affected. Here’s hoping that the budget cuts don’t come to pass and Train Jam lives to see another year! 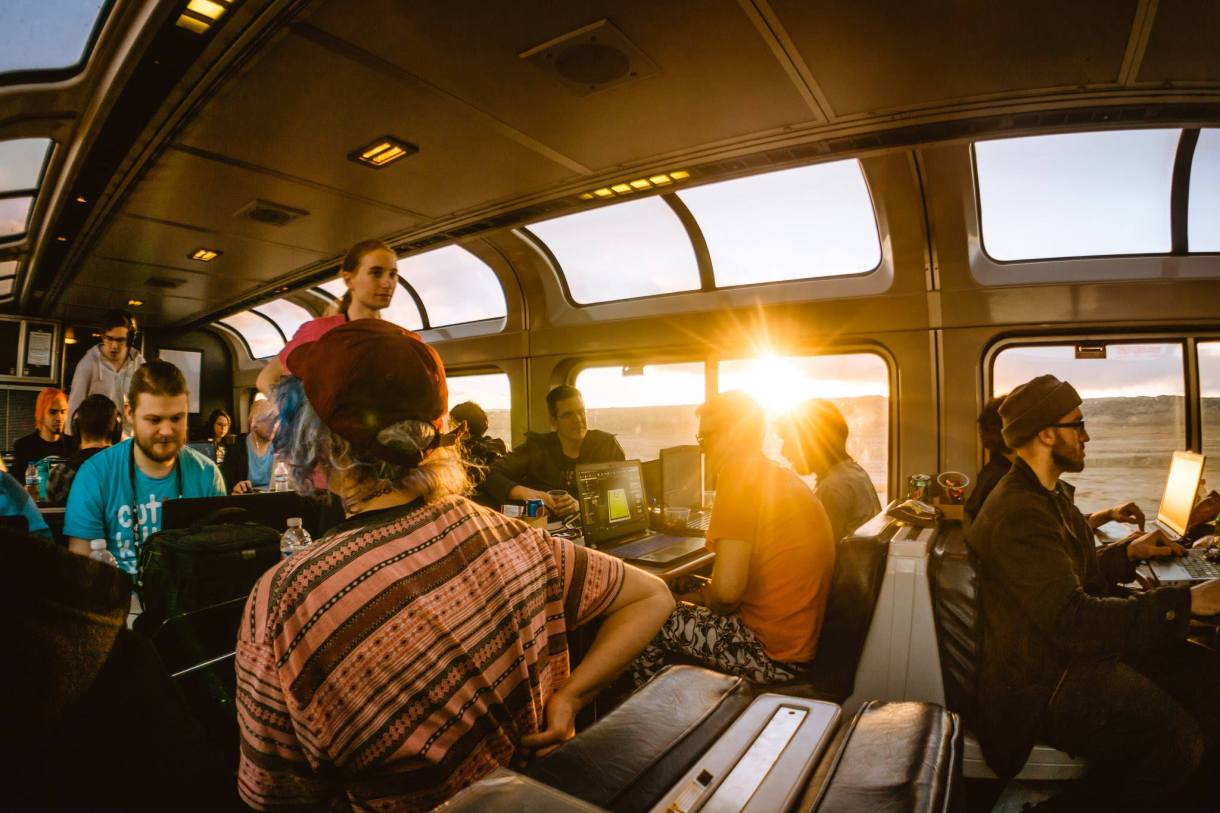 On the train. Photo by Robin Baumgarten

You can play all of this year’s games on Itch.Io and listen to the music created on Train Jam, including tracks from Abraham’s nine games! Find out more about Train Jam on their website or Twitter.