ADAM LAMBERT ON AMERICAN IDOL:
Adam Lambert performed ‘Whaddya Want From Me” last night on American Idol with — at last! — our dear Uh Huh Her lesbian Camila Grey on keyboards! The show opened with Adam inside a giant cone-shaped screensaver/lavalamp/nightly newscast tornado graphic. He sang with lots of feeling before emerging from the Emerald Tempest into a laser light spectacular unlike anything I’ve seen since Captian E-O.

Anyhow, see for yourself, it was FUCKING AWESOME, obviously:

After the performance, The Los Angeles Times asked the contestants for their favorite Adam Lambert moment. Obviously you know mine – when Adam stuck that guy’s head in his crotch. Second best: Tonsil Hockey with Tommy. Third Best: Mad World.

Mangus said it was when Adam figuratively threw glitter at him, Lee said  ‘there’s too many performances to pick’ which means she didn’t see any of them.

Other answers from these random children include ‘he was a great mentor’ from Casey James, ‘my favorite is when he mentored me’ from Andrew Garcia and ‘having him as a mentor was really cool’ from Aaron Kelly. Someone named Big Mike actually said “My favorite Adam Lambert moment is hearing about his reputation from the crew and from our handlers.”

So, I’ve never seen these kids ’til last night when I tuned in for the two-episode Adam Lambert Guest Visit, but I think that everyone except Katie is the weakest link. Goodbye!

Oh also wasn’t there a Top Model Challenge like that Light Show?

LOGO’S NEW NOW NEXT AWARDS:
The nominations for Logo’s 3rd Annual New Now Next Awards are out and you can vote online. Who will win On the Brink of Fame this year?! Our vote goes to Liz Feldman, obvs! (@logo)

SEX & THE GAY MEDIA:
Does the gay media have a sex addiction?

Open up almost any LGBT newspaper or click on almost any gay blog and you are going to see a little sex. Whether it’s shirtless models posing in underwear (or less), ads for sex chat lines, escort classifieds, or just regular advertising that features guys busting out of their tight shirts or jeans, sex is everywhere.  And it helps keeps gay publications and blogs afloat.

Really? REALLY? Not on girl sites. Oh wait we tried to do that and everyone yelled at us. It’s okay, we’re not bitter. Let men objectify men! (@mediate)

KATHY GRIFFIN:
The least shy woman in Hollywood will undergo a pap smear, poolside at the Palomar Hotel in Westwood, California on Friday. She will also decorate her vagina, a la Jennifer Love Hewitt, with a bedazzler, so she’ll be vagazzled. She’s also invited the press to come watch. It will naturally air as part of My Life on the D List this summer. (@huffpo)

SARAH SILVERMAN:
If The Sarah Silverman Program isn’t saved by a Twitter campaign, it looks like this is the final season. (@nymag) 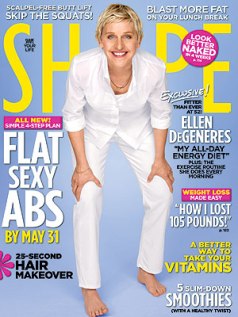 ELLEN & PORTIA:
“She loves me no matter what. Whenever I feel bad about myself, or if I’m in a period where I’m not working out, she’s constantly telling me that she doesn’t notice, that I look beautiful. She’ll say, ‘I think you could gain 10 more pounds.’ She would rather have me heavier than thinner, and she really hates that I ever doubt myself. She loves how I look. She wants me to be happy and never think about it.”  –Ellen on Portia (@justjared)

Also; wanna know Ellen’s diet secrets? Of course you do. “No cake, no cookies, no candy” (she’s on a sugar fast) and says her regular regime includes “no animals, no dairy, nothing processed; a lot of soup, veggies, rice, beans, legumes.” (@people)