The idea of putting Lysol into anyone’s vagina is pretty horrible — just don’t do it! Not to mention that you shouldn’t even douche at all, let alone with kitchen disinfectant, as the US Department of Health has adamantly warned. But did you know that Lysol was advertised as a douching-slash-contraceptive solution for women from the 1920s to as effin’ late as the 1960s? The message: Get your vagina looking and smelling like a hospital and men will want to put their pristine dicks inside you, because hospital vaginas are where dicks belong. 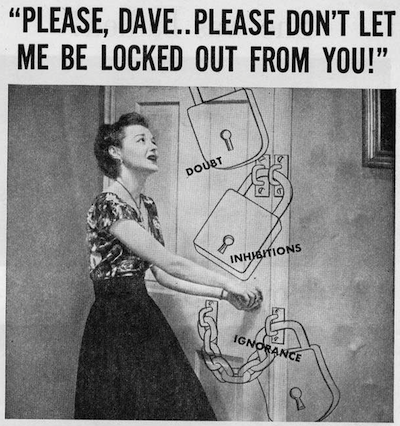 I can’t even imagine using Lysol as a contraceptive, let along as a cleaning solution for your uncanny va-jay-jay (as Freud / Oprah, “Froprah,” would put it). Not to mention that Lysol was using some pretty douchey (hah!) oppressive, partiarchical reasoning to get women to buy Lysol douches in the first place — many of their advertisements from the time adhered to several themes:

1.) Ladies, men choose to marry with you, not the other way around! And because relationships are entirely one-sided, when your marriage goes bad, it’s entirely your fault. Douche out your vagina to make him want to stick with you!

2.) If you douche out your lady bits, you’ll no longer be the smelly adult woman you are — you’ll go back to being the pristine virgin child-bride your husband married! Because that’s not creepy at all.

3.) Do you want to be dainty and elegant like those European people over there? Well, listen to some unfortunate German as we tell you to be “die eleganten Damen” by putting this “non-poisonous (when diluted)” solution into your baby canal.

The advertisements are sending conflicting messages — that women need to be dainty and germless in order to be desirable, fit wives and mothers while simultaneously being sexy women-children and of the classy European elite. For every infantilizing ad that goes, “She is still the girl he married,” there’s another that depicts a woman sitting with her two children and says that there is a “magic quality in motherhood” that comes from a woman “knowing how to take care of herself” i.e., douching with Lysol. The desirability of women as connected to the virgin / whore complex is pretty evident. 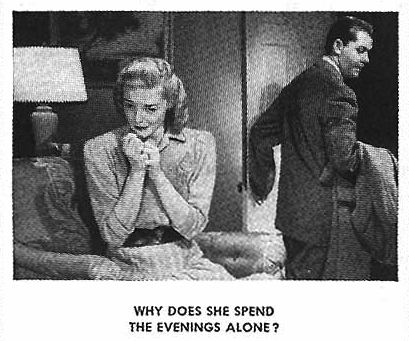 There are also not-as-obvious contraceptive qualities that Lysol disenfectants claimed to have — some ads write that Lysol was an “effective antiseptic that is three times stronger than carbolic acid.” Melanie Zoltan on Suite101.com comments that “carbolic acid was a common abortifaecient in the 19th century and early 20th century” — it’s a fascinating parallel, as this contraceptive message occurs in an ad with a woman huddled around her children. It creates another conflicting message: In order to be a good, fertile mother to her children, a woman needs to actively partake in contraceptive douches.

Do these message sound familiar? While douching with Lysol might sound ridiculous, there are some equally ridiculous things that are still available to use for the sake of this still-existent standard of “dainty feminine hygiene” — use scented tampons and maxi pads because when you’re bleeding, all your junk still needs to smell like fake bouquets of flowers / a toilet air freshener; Brazilian wax your vulva, because women have smelly hairy undergrowth (like men don’t?) that needs to be taken off completely in order to reveal a shiny, smooth, weirdly prepubescent-looking vagina; or even Vajazzle your waxed vulva — cover your bits in small rhinestones to make your bits more appealing and sparkly, as men are just like crows, squirrels or other animals who are attracted to shiny objects. Oy vey.

You can ooh and aah (and groan and moan) to  some of the ads, pictured below, and visit this flickr page for more images: