This month’s Ask Your Friendly Neighborhood Lesbrarian is a bit different than usual. Ordinarily I write these lists of book recommendations in direct response to emails, messages, and tweets from you, readers. I was really hoping I might get a request for queer Halloween reads for the October season, but alas, I did not. Then I thought, what the heck, I’m going to just write this list of queer spooky books. I mean, someone somewhere must be looking for them, right? Below you’ll find 8 queer books appropriate for the Halloween season, from the genuinely terrifying to funny and lightly macabre.

When I Arrived at the Castle by Emily Carroll 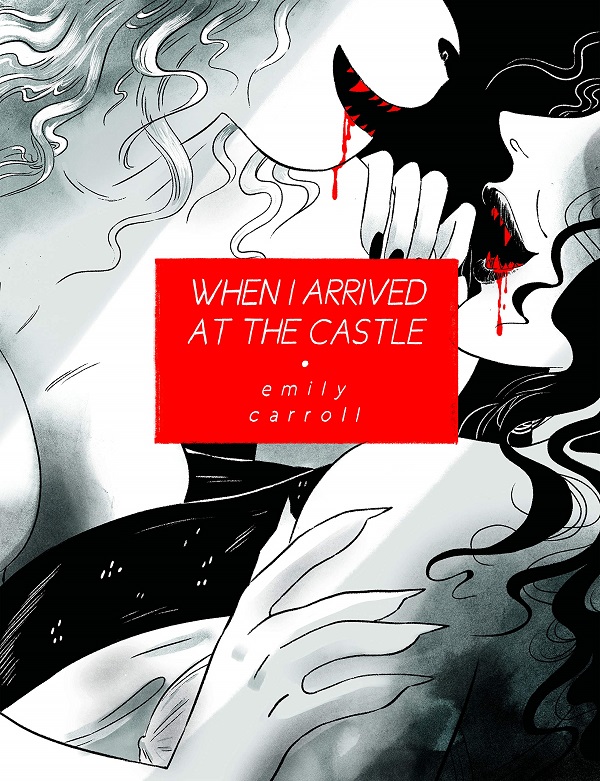 Graphic novelist Emily Carroll is rightfully known for her gorgeous, spooky art, as well as her blend of fairy tale and gothic horror storytelling. Her latest offering — drawn in her trademark red, black, and white — is an unsettling, sexy story about a vampire lady and another lady who is half human, half cat. If this sounds weird, that’s because it is. The vampire lives alone in a castle, and the other woman arrives late one rainy evening, taking reluctant shelter in the creepy chateau. What follows is an erotic, violent narrative where the lines of hunter and hunted are blurred. It’s the kind of story that feels like a dream (albeit a gothic nightmare, in this case). It’s a short book that you’re guaranteed to want to reread, both to savor and try to piece together the eerie, puzzling plot.

The Devourers by Indra Das 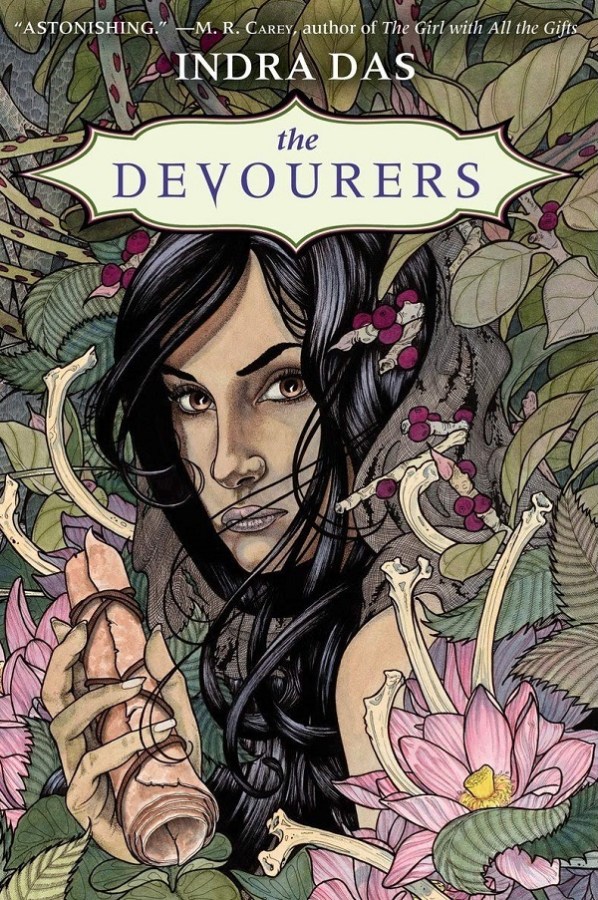 The Devourers is for anyone who’s been looking for a scary, diverse twist on Indian folklore. It’s also one of those books that everyone who’s read it describes as totally unique. Alok is a history professor in Kolkata who meets a mysterious stranger. This stranger tells Alok an alluring tale, but doesn’t finish it. Desperate to hear the end, Alok agrees to the stranger’s terms: transcribe a group of odd documents to get the rest of the narrative — including those written on “once-living skin.” The novel from that point on alternates between Alok’s story and the beautiful and brutal tale he’s bringing to life. The tale stars creatures who are “more than human yet kin to beasts,” as well as diverse genders and sexualities (bisexuality in particular), sexual assault survivors, and hot queer sex scenes.

Gideon the Ninth by Tamsyn Muir 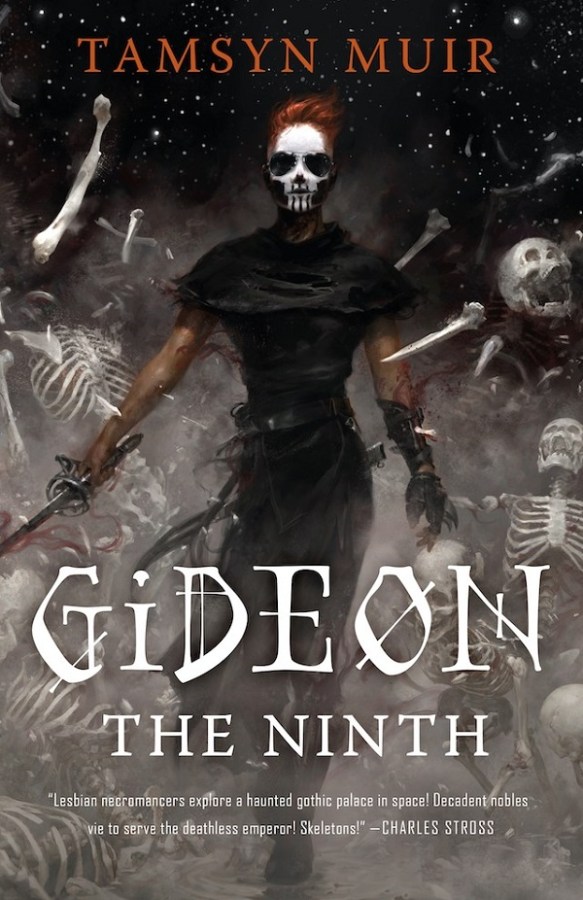 If you are looking for humor alongside Halloweeny themes like skeletons and necromancy, pick up Gideon the Ninth. This “epic science fantasy” is about a lesbian swordswoman named Gideon. Just as Gideon is preparing her escape from a life of servitude in the Ninth House, she is drawn into her childhood enemy Harrowhark’s test by the Emperor. Harrowhark hopes to succeed and ascend to life as an immortal servant of the Resurrection. But she can’t achieve her goal with her cavalier — Gideon — and her sword. It looks like Gideon is not going to be able to escape the undead as she had hoped. Come for the lesbian necromancy, stay for the complex characters, subtle politics, and exceptional world-building.

Dr. Edith Vane and the Hares of Crawley Hall by Suzette Mayr 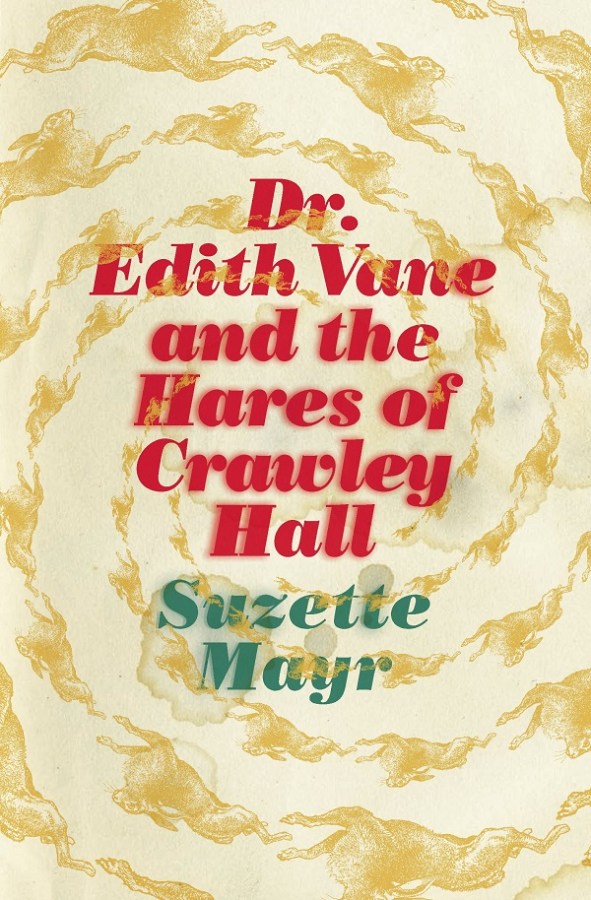 Suzette Mayr highlights the horrors of academia — especially for queer women of color — in this supernatural-tinged satire of university professor life. Dr Edith Vane’s life should be great: she’s just published her 12-years-in-the-making book about the pioneer prairie housewife memoirist she discovered and her therapist continually reassures her she is the architect of her own life. Except everything keeps crumbling down: her new maybe-girlfriend is flaky, her friend/colleague/ex-lover is missing, and the new dean is definitely evil. But the worst of it is that the humanities building, Crawley Hall, seems to be developing sentience. Its new mission? To get rid of all the inhabitants. Its co-conspirators are creepy hares with glowing red eyes who pop up in staircases and hallways that weren’t there the day before. 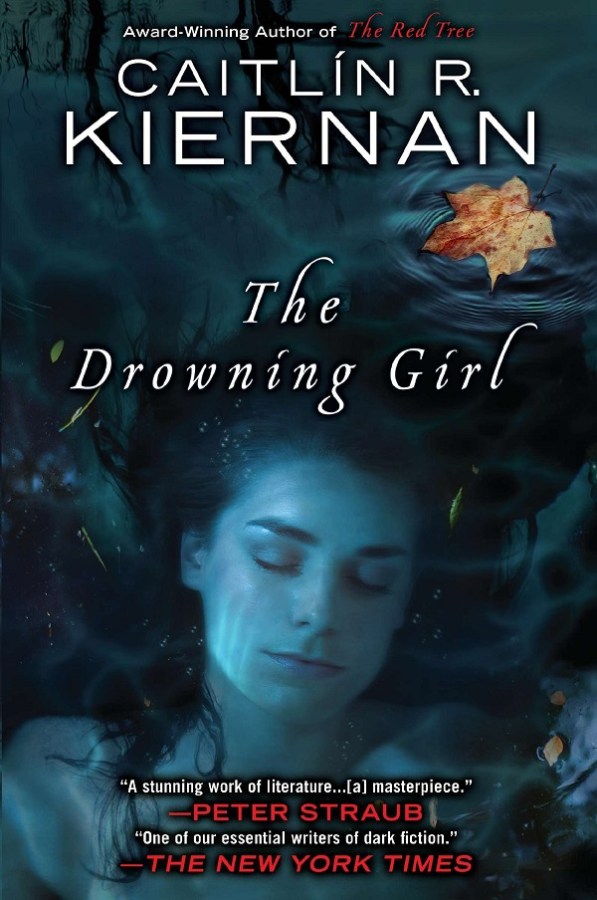 Caitlín R. Kiernan is a master of her craft of dark fantasy-sci fi horror and The Drowning Girl is an excellent place to start with her books. India Morgan Phelps — aka Imp — begins her first person story by telling the reader that she is schizophrenic and that she’s aware of her own unreliability. This, of course, calls into question the entirety of the book that follows. But this is not a story that asks you to guess whether the supernatural elements are real or whether they are just a product of Imp’s mental health status. Instead, it’s an investigation of how the paranormal — Imp’s encounter with a mysterious figure — interacts with mental illness. This post-modern creepy, if not outright scary story, also features a lesbian relationship between a cis and a trans woman!

Her Body and Other Parties by Carmen Maria Machado 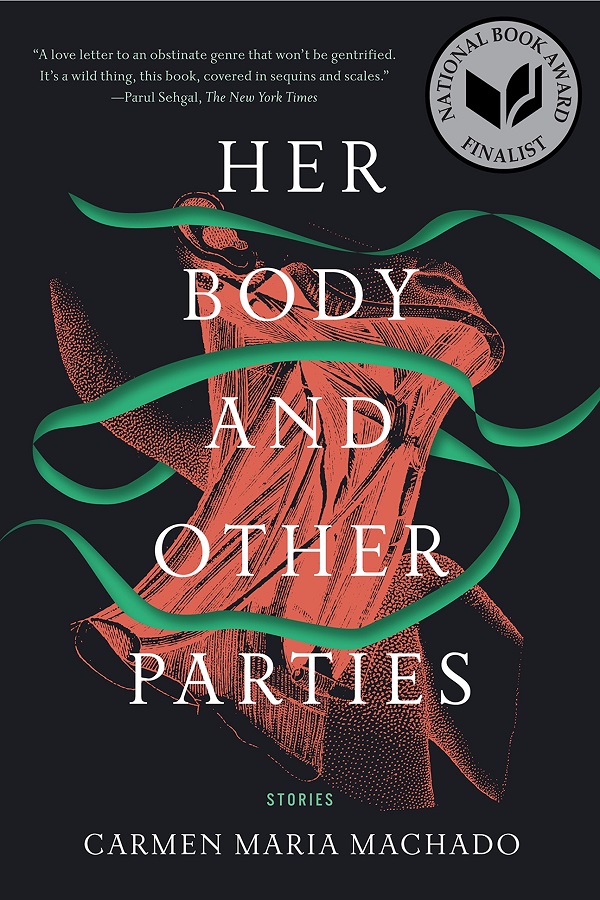 This collection of short stories is a unique mix of speculative fiction, horror, pyschological realism (a la The Yellow Wallpaper) and dark fairy tale. Of course, queerness and women’s bodies are recurrent themes: both the horror of living in a misogynist society and the pleasure of queer sexuality. A woman shares her bi(sexual) history as a plague spells the end of humanity. Prom dresses at the mall become horrifying as a saleswoman finds something disturbing sewn into the seams. Every episode of SVU is reimagined as queer and paranormal. A new wife fights off her husband’s pleas to remove the green ribbon that she always wears around her neck. A woman tries to live her life after sexual assault and finds herself hearing the thoughts of porn actors. Also check out this list I made of 8 Books to Read if You Loved Her Body and other Parties.

Fist of the Spider Woman: Tales of Fear and Queer Desire by Amber Dawn 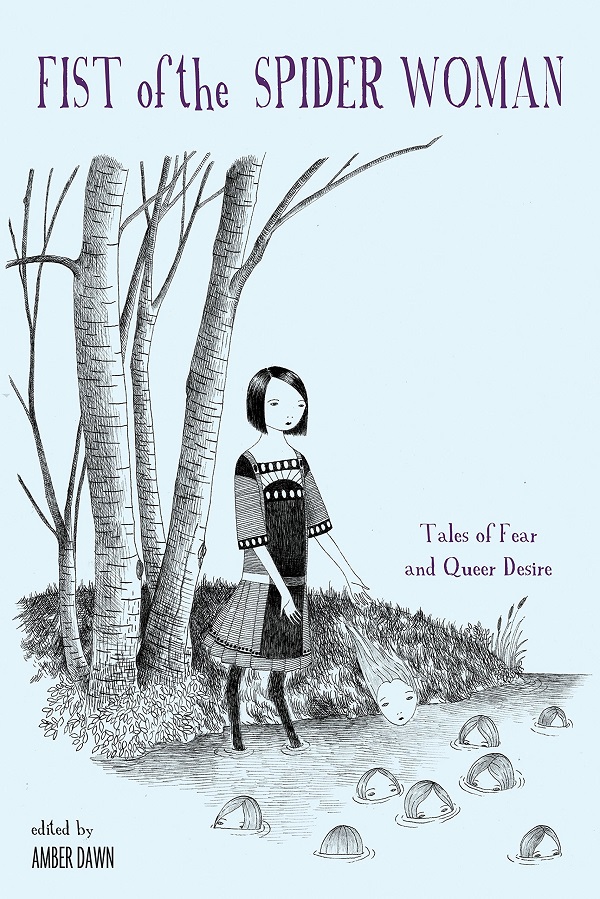 Amber Dawn has done a majestic job with this anthology focusing on queerness and horror. Interested in the intersections of fear and queer desire, she’s chosen a wide variety of pieces, with the idea of wanting “not to quell our fears, but to embrace them.” Some stories are genuinely terrifying, others are more funny than scary. Many of them have a masterful blend of erotic and creepy energy. In one story, an intersex character plays a horrifying game of “Bloody Mary.” In another, a disabled, genderqueer character and their trans guy ex have hot sex, but it still doesn’t take the edge off their paranoia about government conspiracy. Amber Dawn’s contribution is a combination of mean mommy kink erotica, ghost story, and anti-gentrification treatise. There’s something for everyone!

White Is for Witching by Helen Oyeyemi 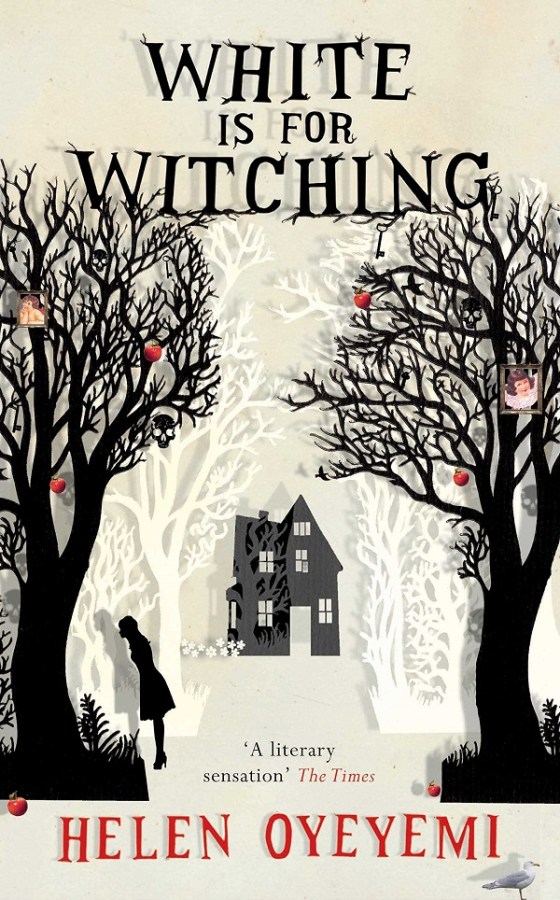 Helen Oyeyemi has an incredible way with atmosphere, somehow writing books that feel at once like timeless dark fairy tales but are also fresh and relevant. In this neo-gothic haunted house story, the Silver family is mourning the loss of their matriarch. The grief of her twins, Miranda and Eliot, and her husband are matched only by the house itself, whose sentient-seeming groans and creaks are increasing. Of course, that may be the generations of women living in the walls that Miranda has discovered, or the spirit of her late mother, or the echoes of the Nollywood movies the house’s Nigerian housekeeper watches. As in every great haunted house story, the house itself is an unsettling character along with its human inhabitants.

What queer books for the Halloween season would you recommend? Share them in the comments! And please keep on sending me your lesbrarian requests for future columns. You can send me an email at stepaniukcasey [at] gmail.com or comment below.