The acrid smoke from the fire of Trump’s presidency is wafting across the whole planet. I don’t know about you, but as a Canadian I’ve been doing a lot of flailing around feeling powerless and frustrated, wishing that somebody could sift through the reams of action calls to compile ones that are relevant to me, as a non-American who doesn’t have any local Congresspeople to contact, so I decided to do it myself.

Here are some things people all around the world can do to help douse the abominable orange flame. Please feel absolutely encouraged to share your own links, ideas and information in the comments below!

Ali’s last tech column included links to a free app that compiles a list of businesses that support Trump, either ideologically or financially. Many of these businesses have outlets or sell products in other countries, including Wal-Mart, Sears, Winners, and Hudson’s Bay. Don’t want to download an app? Here is the #GrabYourWallet movement’s blacklist of Trump-friendly retailers.

Use all that money you saved in boycotts for good! Contribute to the cause of organizations that are actively resisting Trump’s reign of terror, and/or who will be directly affected by his platform and policies. All of the following orgs accept international donations:

While you’re donating, consider seeking out ways to donate to marginalized individuals through crowdfunding platforms who are suffering under the Trump administration and who are raising funds for medical expenses, passport fees, travel, childcare, legal fees, bail, housing, transition-related care, or other needs.

If the heads of state of your country have not yet publicly denounced or taken action to counter Trump’s agenda, you can find or start up initiatives to put pressure on them. For example: here is a petition to prevent Trump from making a State Visit to the UK which is closing in on a million signatures, another from the UK requesting that cooperation with the Trump administration be conditional on human rights, and an open letter that members of the Canadian tech community can sign urging Justin Trudeau to offer temporary residency to those affected by the immigration ban.

Do you know of someone in your country who has been affected by the immigration ban? Start up and/or promote an online fundraising campaign to help them, like this initiative that raised £6000 for a Scottish-Iranian veterinarian stranded overseas.

After the January 21st Women’s Marches spread worldwide, a friend of mine posted a 7-second video of her tiny community’s tiny march in rural Nova Scotia that went instantly viral, prompting an outpouring of grateful comments from all over the U.S. The lesson here is that solidarity is important, visibility is important, and every voice can make a difference. Here’s a guide to planning your own protest or rally. The next major anti-Trump rally in the U.S. is scheduled for April 15; track down the organizers of the Women’s March nearest to you and find out how you can get involved with the next one. Or find out about other protests and rallies happening near you, make a sign, and show up! 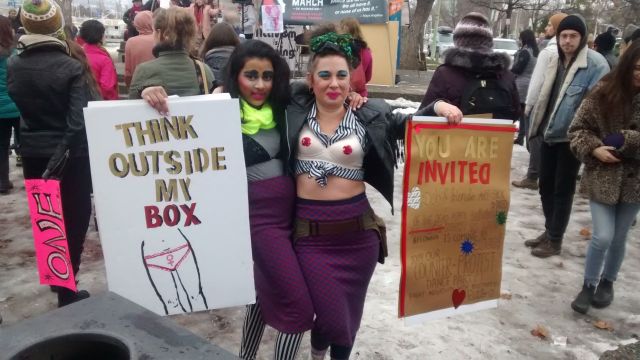 from the Women’s March in Kelowna, B.C. on January 21st

I bet the universe $1000 (in hypothetical galaxy dollars) that each of you has at least one American Facebook friend. And even if you don’t, some of the people who share your posts further probably do. Can’t afford to donate? Already signed a petition? Sharing the links online still helps to spread the word and educate others!

Fight Fascism in Your Own Country

Trump’s political ascendancy could, terrifyingly, have ripple effects around the world unless we stop it, as it gives fuel to fascist movements in other nations. Get involved in local and national politics at home to help ensure the conflagration stops here, and talk to your friends and family about these issues. Remember: Only YOU Can Prevent Orange Fires. Comment below and let us know the details of what actions people can take in your country!

On that note, a special action call to my fellow Canadians: Yes, our very own homegrown Trumpalike is already taking notes here as well. If you think it couldn’t happen here, let me remind you that our last two elections resulted in a majority government with a minority of votes. We need to agitate loudly for electoral reform, as the Trudeau administration promised and are now trying to un-promise. Get involved with Fair Vote Canada, contact your local MPs, and most importantly, spread the word and make noise!

Your turn, international fam: What else can we do?