Demonstrations and political protest are pillars of democracy. I, like many others, remember my first protests and can trace my activist roots back to participating in a demonstration. The first time I marched for a cause, it was in a Take Back the Night march at my undergraduate college in 2001. I initially went to the march because it counted as extra credit for a course I was taking, though I generally felt like sexual assault was a bad thing and feminism was a good thing.

It was at the speak-out after the march, organized by our campus Women’s Center, listening to survivors tell their stories, that I converted into a full-time feminist, officially. I never looked back. I joined the Women’s Center. The next year, I helped organize the Take Back the Night march. The year after that, I ran the Women’s Center and I helped organize buses to the March for Women’s Lives. The March for Women’s Lives was my first mass demonstration, where I joined 1.5 million other reproductive rights activists on the Washington Mall. 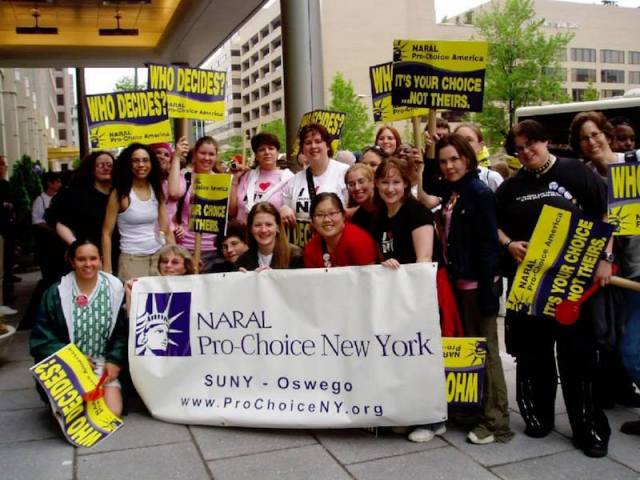 Oswego delegation to the March for Women’s Lives, 2004.

That demonstration moved more than just my legs and body. As we wound a vicious and joyful path through the Capitol, I came to understand that my body was a weapon as much as my words. I learned something about community and solidarity and showing up. I carried that swelling feeling of being a part of something collective, of standing up together, with me long after the march.

A couple years later, I was working as a community and campus organizer for Planned Parenthood and today I am proud to work for the New York affiliate of the ACLU. I believe strongly in the First Amendment, in the right to protest. I believe even more in the power of protest, that protesting can change us as individuals and as a culture, that it can help change laws as well as #heartsandminds.

We just witnessed one of the largest mass demonstrations of all time, the Women’s March, which engaged 3.3 million people across the world. This past weekend, thousands of people flooded and disrupted airports across the country to literally stand against Trump’s outrageous and horrifying Muslim ban. Less than two weeks into Trump’s presidency, I’m positive that protest is going to be a necessary weapon in the fight against this administration. We’ll need to rise up and use our bodies and voices, working alongside Congress and the courts, to defend our collective rights over and over and over and over.

Perhaps you’ve been moved to organize a demonstration, but don’t know where to begin. If so, I hope this guide will help you.

Before you even decide what kind of demonstration to have, you need to consider the “why.” Ponder these questions:

There are many different ways to do a public demonstration. Here’s some ideas and questions to ask yourself:

Who is directly impacted by the issue you’re rallying for? Who will be your allies? What kinds of groups and organizations and individuals should you reach out to? Who will definitely come? Who do you need to engage?

As you’re considering the who, also consider that you are centering people who are directly impacted, especially if you are an ally to the cause. It can be easy to get wrapped up in good intentions as an ally and forget that we must amplify others’ voices, speaking up but not over.

4. Is There a Strategic Time and Location?

Now that you’re clear on why and what and who, it’s time to figure out where you’re going to hold your demonstration. If getting media attention is important, you need to be in a high-traffic area or a highly symbolic place that you can invite media to. Should it be in the morning or early afternoon to get the most media attention before press time for TV news stations? The evening or late night? A 24-hour vigil or camp-out/sit-in? On a weekend or a work day? Do you want to coincide with a holiday like International Women’s Day or Refugees Rights Day or Labor Day?

Here are some examples of a thoughtful location:

For a large demonstration, you’re going to need help. Here are some volunteer roles that people can play. (One person may play multiple roles.):

Don’t underestimate the power of social media (FB, Twitter, Tumblr), especially for spontaneous actions that are organized quickly and need an immediate turn-out. Here’s some other ways to get the word out:

Powerful symbols emerge from protest movements. Think of the “Hand Up Don’t Shoot” or “I Can’t Breathe” signs and images and chants that are prominent in the Black Lives Matter protests. The pink hats (whether you love them or hate them) at the Women’s March on Washington. The “Silence = Death” banners held by ACT UP activists during the AIDS epidemic.

What will your symbols and chants and slogans be? Will you have a common hashtag for the event? How will you make the event meaningful?

If you have specific messages or slogans you want to highlight, it helps to make and bring a bunch of your own signs. People will often bring their own signs to rallies and demonstrations, but many come empty-handed and are happy to hold one of your pre-made or pre-printed signs.

Tweet out and share updates on social media as they’re happening with the hashtag, directly at targets and media contacts if you can.

8. Safety and Permits and Civil Disobedience

Finally, there are some important things to consider when it comes to protecting yourself and your fellow protestors.

You don’t need a permit to hold a demonstration on public property or in a “free speech zone” like on a sidewalk or in a public park or the plaza in front of a government building. However, you may want to get one anyway to ensure you will have the space or to ensure that counter-demonstrators don’t have an equal right to be in the area in which you’re demonstrating. There are less likely to be unlawful arrests at a permitted protest, which may be important if people are coming who are likely to be targeted by police.

You do need a permit to march in the street. Technically, marching in the street without a permit is not clearly Constitutionally protected (in the United States) and you can be arrested. Blocking traffic on the street or the sidewalk without a permit is considered unlawful. There may be other local ordinances that impact protest. For example, it is illegal to carry a sign on a wooden stick in New York City.

Some protest tactics involved planned civil disobedience. For example, sit-ins or die-ins, where protestors sit or lay on the floor/ground, often blocking traffic or access to a building, sometimes on private property. Any protest on private property is not Constitutionally protected free speech and you can be arrested for trespass among other charges.

Civil disobedience can be powerful protest. I really urge you, though, to communicate to others what their rights are, so that people know the risks of participating and consent to them willingly. Some people can’t afford to be arrested if they are on probation or parole, are undocumented, or have jobs that would fire them if they were arrested. Also, some people may be more likely to be targeted by law enforcement during a demonstration based on their perceived race or ethnicity, gender, or religion. Take that into consideration when planning a demonstration during which people expect to be arrested and/or to break the law.

If you are planning civil disobedience, expect that you may be arrested and prepare attendees for potentially being arrested. I’d recommend carrying a government-issued photo ID on you so you can identify yourself after you’re arrested (or else you may be stuck in jail until you can ID yourself), as well as emergency contact numbers and the number for the National Lawyers Guild in your area written in permanent marker on your inner arm or upper thigh. Read up on your rights before you go and have a plan for when you get arrested including knowing how you’ll pay your bail (cash is usually the best and fastest option).

You may consider inviting legal observers to monitor your protest, to document any interactions between law enforcement and protestors and to protect your rights. Should there be an arrest or issue, legal observer records can be used in court to help support protestors’ rights.

You could also consider having a permit for part of your demonstration and civil disobedience during another part, letting people know when the shift is happening so they can make informed choices about participating.

You can have levels of participation (Red, Yellow, Green or 1, 2, 3) that involve different levels of risk and let people know what those are ahead of time and at the beginning of the protest.

After the demonstration is over, you will hopefully have a group of engaged folks who want to keep taking action. If you collected email addresses or contact info from attendees, follow up with folks by thanking them for coming and letting them know what the next action will be or how they can stay involved. Keep them engaged.

Think about how you can keep the pressure on your targets and devise other organizing strategies and tactics to get you there. Perhaps a whole campaign plan is in order, if you don’t already have one.

Have other tips you want to share? Do you remember your first protest or rally and how it made you feel? Let’s keep the convo going in the comments!