Hamilton is coming to Disney+ this weekend, and if you’re looking to stream other Broadway shows online after you watch that one to one hundred times, here’s your guide to do that with many of the world’s most famous musicals! I did not include YouTube bootlegs of live shows here, you’ll have to hunt ’em down on your own. Of course that also means that most recent productions aren’t available, such as Spring Awakening and Jagged Little Pill. But we make do with what we have! Also, a lot of these shows are old and therefore problematic, but you probably knew that already.

Free for: Subscribers to Amazon Prime and CBS All Access (2016 Live Telecast)

The 1978 film adaptation of the 1971 Grease, starring John Travolta in a tight white t-shirt and Olivia Newton-John eventually donning a perm and black leather pants, is $3.99. The 2016 Grease Live! performance starring Vanessa Hudgens is included with Amazon Prime or via the CBS All Access Channel (free 7-day trial, $5.99 after).

The story of Delta Nu sorority sister Elle Woods pursuing a particular man and eventually a particular law school was shown live on MTV in 2007 (MTV later produced Legally Blonde: The Search for Elle Woods to replace show lead Laura Bell Bundy) and has been uploaded to YouTube by a kind soul who cares about you and your thoughts and feelings.

Billy Elliot was a musical about a boy who wants to do ballet, set during the 1980s miner’s strike in Northern England, that became a Broadway show which was filmed live on the West End and can be watched by you for $3.99.

The 2007 PBS Great Performance’s recording of the Broadway revival of Company starring Raul Ezparza (aja ADA Rafael Barba). lt was uploaded to YouTube pretty recently, so it’s hard to say how long it’ll last, but …. catch it while you can.

You can watch the 1973 film adaptation of Jesus Christ Superstar on Hoopla (for free) or on YouTube for $3.99. In 2012, a Live Arena Tour brought the music of Tim Rice and Andrew Lloyd Webber’s classic rock musical to the UK and Australia with Spice Girl Mel C, aka Sporty Spice, playing Mary Magdalene — Amazon has that for $3.99.

Wanna see Audra McDonald, Jenna Ushkowitz, Rumer Willis, T.R. Knight, Cheyenne Jackson and Martha Plimpton exist within a daisy-chained exploration of bittersweet love throughout New York City History, originally performed Off-Broadway in 1993? What if I told you that the 1989 story includes a romance between two women played by the aforementioned Audra McDonald and Martha Plimpton? Wow, well you can do this for free on Hoopla. 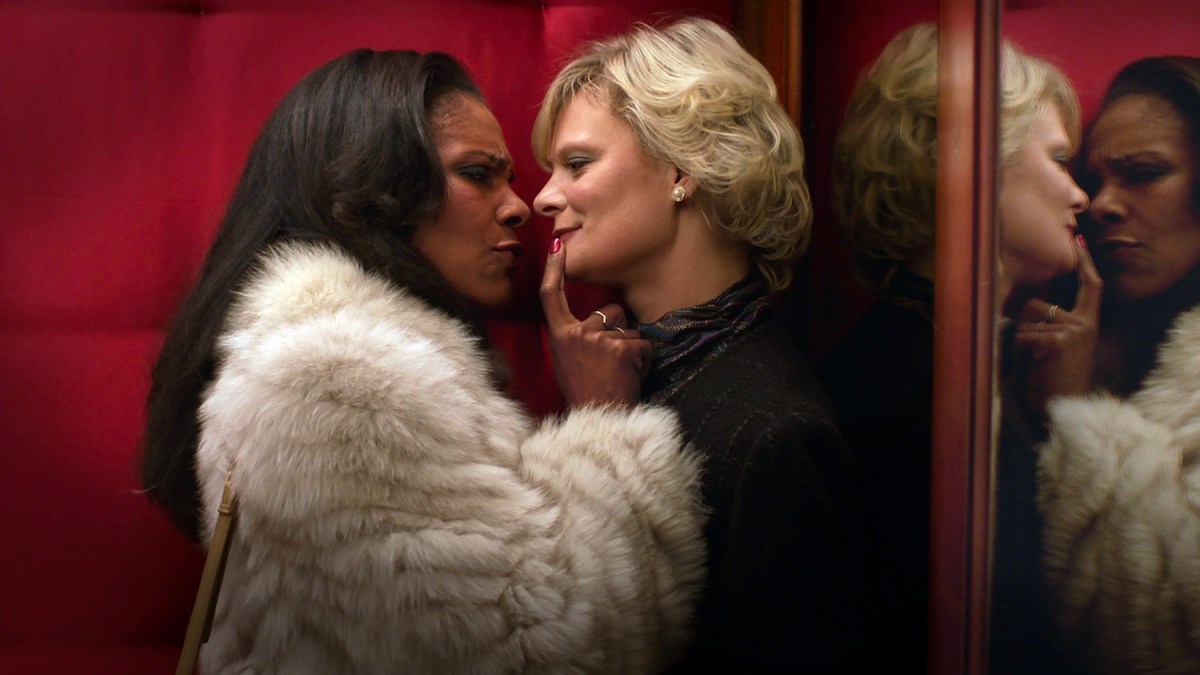 Joseph and the Amazing Technicolor Dreamcoat

For $3.99 on YouTube, you can see a British direct-to-video adaptation of Andrew Lloyd Weber’s musical, which hit Broadway in 1982. The film stars Donny Osmond and is identical to the West End stage production aside from a little tiny framing device. It’s also available on Amazon free with a Broadway HD subscription or $3.99 as a one-off.

For zero dollars on Hoopla, you can enjoy the 1979 edition of the 1968 anti-war Broadway musical Hair: an American Love-Rock musical, about a bunch of hippies doing drugs and avoiding military service. The cast includes Treat Williams, Beverly D’Angelo and Nell Carter and choreography by Twyla Tharp.

Stephen Sondheim’s Into the Woods intertwines the plots of Brothers Grimm and Charles Perrault fairy tales far before Once Upon a Time was even a glimmer in ABC’s little eyeballs. Lucky for us all, a high-quality 1989 performance featuring the original Broadway cast (including Bernadette Peters as the Witch) is free on YouTube.

The Academy Award nominated 2014 film adaptation’s cast is pretty spectacular: Meryl Streep, Emily Blunt, James Corden, Anna Kendrick, Chris Pine, Tracy Ullman and Christine Baranski. You can rent Into the Woods on iTunes for $2.99 or Google Play for $2.99. It’s a purchase-only property at Amazon for $19.99, where you’ll also get some Bonus Features.

Free On: Tubi, Hoopla or for Showtime Subscribers (2002 Film)

The 2002 adaptation of the 1975 stage musical was the first musical to win Best Picture since Oliver! snagged it in 1968. And Chicago is free for you on Hoopla or on Showtime if you happen to be a Showtime subscriber or on Tubi no matter who you are or what you do.. You also can rent the Catherine Zeta-Jones / Renee Zellweger black comedy musical for $1.99 on Amazon.

Free On: Hoopla, YouTube or Vudu or for Broadway HD Subscribers (1993 Made-for-TV musical)

Bette Midler stars in the 1993 made-for-TV musical of the 1959 stage musical Gypsy, available for you right this minute — it’s your turn! — on Hoopla or catch it free with ads on Vudu or just enjoy it for free on YouTube. It’s also included in a Broadway HD Subscription. The 1962 film, starring Natalie Wood and apparently loathed by Arthur Laurents, who’d written the musical’s book based on Gypsy Rose Lee’s memoir, is available on TCM (Turner Classic Movies) on demand or Fuboand can be rented on iTunes or YouTube for $3.99.

The legendary 1961 film for which Rita Moreno won an Oscar and a bunch of white people played Latinx characters is free for Starz subscribers or to rent on Amazon for $3.99.

Hoopla’s got your free hookup of Les Miserables‘ Live 25th Anniversary Concert filmed at the O2 Arena in London in 2010 with Lea Solonga, Norm Lewis and Nick Jonas. This very epic and lengthy musical about the French Revolution also became a very long film in 2012, starring Anne Hathaway, Hugh Jackman, Amanda Seyfried, Russel Crowe and the hubris of Tom Hooper. HBO subscribers can watch the 2012 Les Miserables movie, others are permitted to You can rent it on Amazon for $3.99.The less-discussed 1998 film adaptation of Les Miserables, starring Clarie Danes, Uma Thurman and Colin Firth, is free on Amazon Prime.

Hi Margie! Hi Alice! What’s the story Morning Glory oh it’s that you can watch the1963 film adaptation of this “happy teenage musical” that hit Broadway in 1960 and has since been performed in every high school to ever erect a stage. You can rent it on Amazon Prime ($1.99) or Vudu ($1.99). Broadway HD has the 1995 film, starring Jason Alexander and Vanessa Williams.

Tim Burton’s 2007 “musical period slasher film” adaptation of Sondheim and Wheeler’s 1979 musical stars Johnny Depp as serial killer Sweeney Todd and Helena Bonham Carter as Mrs. Lovett is for rent for $3.99 or for free with ads on Tubi.

Have you ever considered measuring your life in love? These young aspirants are doing exactly that in this musical we’ve written about quite a bit on this website. The 2005 film adaptation is included with a Starz subscription or you can rent Rent Amazon for $2.99. Rent: Filmed Live on Broadway is — you guessed it — a live film of Rent‘s final production on Broadway in September of 2008. You can invest in your desire to witness this on Amazon for $12.99.

Fiddler on the Roof

Matchmaker matchmaker make me a match with the 1971 film adaptation of the 1964 story of a poor milkman whose love, pride and Judaism help him face the oppression of turn-of-the-century Czarist Russia. It’s included with Amazon Prime or 99 cents for non-subscribers.

The Phantom of the Opera

The 2013 Broadway Musical with music by Cyndi Lauper and book by Harvey Fierstein tells the story of an entertainer named Lola and a factory owner who come together to create a revolutionary pair of sturdy stlletos. You can watch the filming of the stage production with a Broadway HD subscription or with a membership to your local PBS affiliate.

HBO subscribers can tap in to the story of suddenly Seymour and Audrey and a plant that eats people with their subscription. You can rent this 1986 film, based on Menken and Ashman’s 1982 horror comedy rock musical for $1.99. It’s not a Broadway cast, but there’s a pretty high quality recording of a performance of it the American Musical Theatre of San Jose.

Oh there’s so much wrong with this little 1975 adaption of the 1973 sage musical production Amazon describes as “a bacchanalian romp of murder, bisexuality and canibalism” but also it’s a cult film near and dear to so many queer hearts and you can rent it for $3.99.

A sweet $1.99 will get you a ticket to see Beyonce and Jennifer Hudson in the 2006 adaptation of the 1981 Tony award winning musical about a trio of black female soul singers, one of whom is not going, she’s staying, and you’re gonna love her.

Vudu’s got the 1980 film Fame!, the inspirational musical about a group of unique and talented students at New York’s prestigious High School for the Performing Arts for $1.99. Broadway HD has a recording of the stage musical from a 2020 West End production.

The movie-musical that inspired the stage musical is available on Disney+ or can be rented for $3.99. If, like me, you were a fangirl of the film from the start but have yet to catch the Broadway musical production then you (me) will be pleased to know you can  watch it on Disney+ or watch it now for $3.99.

The 2017 revival of Falsettos was nominated for five Tony Awards for its story of “a a modern family revolving around the life of a gay man Marvin, his wife, his lover, his soon-to-be-bar-mitzvahed son, their psychiatrist, and the lesbians next door.” Broadway HD has the Broadway cast, including Andrew Rannells and Traci Thoms, “live” from Lincoln Center.

You can read the history of women playing Peter Pan here to start. Broadway HD has a live production starring Cathy Rigby in Peter Pan from the show’s late ’90s Broadway revival. Mary Martin is perhaps most associated with the role and perhaps with your gay feelings, and the 1960 NBC TV Broadcast starring Martin is on YouTube for free.

Madonna played Eva Peron — an Argentinian actress who married Argentinian president and dictator Juan Peron and became famous and beloved and controversial — in the 1996 film adaptation of the Broadway musical you can rent for $2.99 on Amazon.

Catherine Johnson wrote the 1999 musical Mama Mia! centered around songs by ABBA, which became a “jukebox musical romantic comedy” film ($1.99, or free for Starz subscribers) in 2008 that you’re undoubtedly familiar with and even inspired a sequel our reviewer called “the Mommiest movie of the summer.”

The 1978 movie-musical of “The Wiz,” starring Diana Ross and Michael Jackson, is free for Starz subscribers or rented for $3.99. The Wiz Live!, a 2015 NBC production starring Queen Latifah, Amber Riley, Uzo Aduba, Mary J Blige and Common, can be purchased for $9.99.

You can catch Barbara Streisand’s legendary performance as comedienne Fanny Brice in the 1968 film adaptation of the 1964 Broadway musical on CBS All Access (free for subscribers) on Amazon Prime (Free with Ads).