Adding a “comes out, lesbian” keyword column to my Tweetdeck was an incredibly educational experience. If you’re unfamiliar, Tweetdeck is an application that enables you to view multiple twitter timelines in one interface — it’s how I track mentions of autostraddle, keep up with the news, and follow the people that I follow. You can add a column for a specific search term, so every time somebody tweets using those words, it’ll pop up. See: 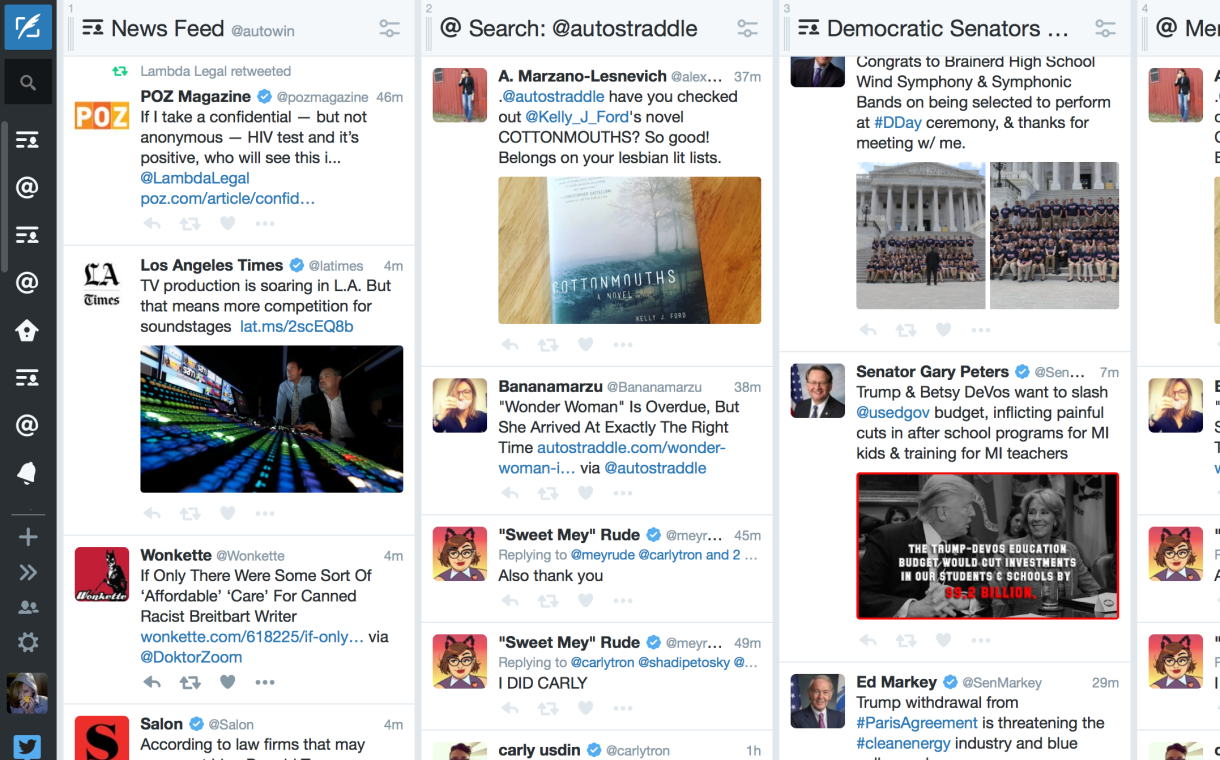 Obviously, I created the “Search: ‘comes out, lesbian” column in order to stay up-to-date on any celebrity coming out as a lesbian. I have indeed received some tips in that department. But mostly, I get other stuff. Namely:

2. An apparently otherwise-heterosexual woman declaring that her “inner lesbian” comes out when she consumes alcohol or views an attractive woman in real life or in pop culture. I’d like to commission a study on these “inner lesbians” but who has the time.

4. Excitement about the release of Kabi Nagata’s My Lesbian Experience With Loneliness.

5. Speculation about whether or not various members of the kardashian/Jenner family will come out. E.g., “i high key think kendall jenner is lesbian and im waiting for the day when she comes out and i can watch her flourish”

Then there are other delightful gems — jokes, observations, accounts of inner turmoil — that just turn up. I didn’t ask for them. I wasn’t looking for them. But now I have them.

I’m pasting the text of each tweet content rather than embedding the tweet because these people did not agree to be in my life or yours.

1. web designers how do I make it so that if straight men try to read my lesbian comic a hand comes out of their screens and clocks them

2. when’s florence + the machine going to drop a new album i have a lesbian out of body experience every time one of her songs comes on shuffle

3. Sits down to watch shameless with my mom, *lesbian sex scene comes on* stands right back up and walks out

4. Oh please! I will never ever have respect for Bruno Mars until he comes out & tells us he is a butch lesbian from the 70’s

5. (@-reply to another twitter user)
you didn’t see the lesbian sex scene? did you even get to the part where flappy bird comes out? god, you are pathetic

6. (@-reply to Nancy Pelosi)
Nancy do u really believe the bullshit that comes out of ur mouth. R you & Hilary having a lesbian affair because u r still on her tit

7. If you say lesbian three times in the mirror, Ellen comes out and starts dancing.

8. Can someone write a story about a young lesbian who comes out but never gets the girl? Because that’s my life story.

9. who wants to be my fake boyfriend when my family comes out for my graduation so they stop telling everybody i’m a lesbian

10. “how do you know you’re a lesbian if you’ve never been with a man” HOW ABOUT I SHOVE MY CONTROLLER SO FAR UP YOUR ASS IT COMES OUT YOUR MOUTH

11. If it comes out that Maggie Thatcher was a lesbian I DON’T claim her

12. The truth comes out; it was lesbian nuns.

13. Would not be surprised if the Clintons divorced quietly and hill comes out as a lesbian no need to hide it now.

14. “You’re going to be that lesbian that comes out when you’re 35 after getting a divorce with a man you had two kids with” bitch I might be

15. My little sister is a lesbian. I’m tweeting this now so I can come back to and RT it when she comes out in four years

17. Mum always comes out with these cool facts about her past… She just told me when she was 18 she had a dj set at a lesbian disco.. niceee

18. I think my new neighbor is a lesbian. She comes out EVERY time she hears my car lock sound… at least she says hey instead of just staring

20. Rosie once was funny and once was nice. Anytime a lesbian comes out they turn mean. They are men haters. imho

21. Will there be any leaks on HRCs sexual life revealed? I’m betting on lesbian when Wiki comes out!