SPRING! Have you all heard of this thing called spring? It’s when the air finally doesn’t feel like ice trying to break down your veins, and the grass finally turns green again instead of looking like sludgy decay. Also there is sunlight! Honest to goodness SUN LIGHT FOR WHOLE LONG HOURS AT A TIME! Spring is the best. You should get you some.

The most unfortunate thing about spring, however, is the rain. Last week in Michigan, it rained a fuckton. During one of those storms I thought to myself: “Self, I really wish there was a simple list of board games that I could be playing right now. Even better if that list told me what wine to drink on this dreary evening.” And so, this list was born.

I’m not very fussy about my wine, but I am very fussy about my board games. I think wine should be easily drinkable and described in words that don’t require a sommelier’s license (though more power to you if you happen to have one). I also think a bottle should never cost more than $20, as is true on this list. Most of these wines can be found at Trader Joe’s, because that’s where I buy most of mine. I tried to stick with relatively well known brands, so all of these bottles should be fairly accessible to whatever is your wine-purchasing store of choice.

The board games are a mix of classic and new school, so hopefully you find something familiar and something you’ve never heard of but want to try out. Nearly all of them can be played with two players or more, though some are specifically designed for large parties. 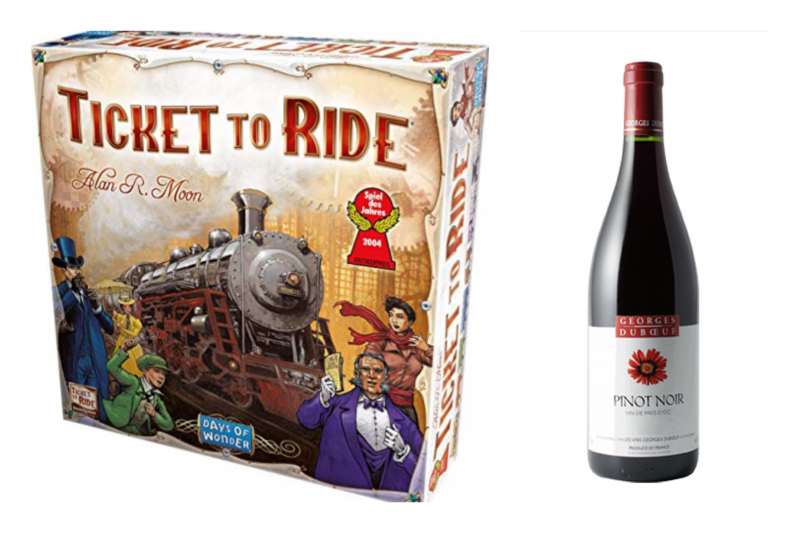 Ticket to Ride is the new millennium’s Monopoly. That’s right; I said what I said. Once I heard of a mother who – during an extraordinarily important moment of the game – flipped the entire board upside down and called her own daughter a “Bitch!” I kid you not. In Ticket to Ride, you build cross-country train routes and secretly plot to block other players from completing their own. It sounds deceptively simple, but if you’re the kind of person who enjoys buying Park Place and making your friends squirm for it, then my goodness are you going to love this game! Pair it with the essentially simple Georges Duboeuf Pinot Noir. It tastes like strawberries and cherries; your group will have no problem finishing the whole bottle while waiting to see which early 20th century rail tycoon comes out on top. 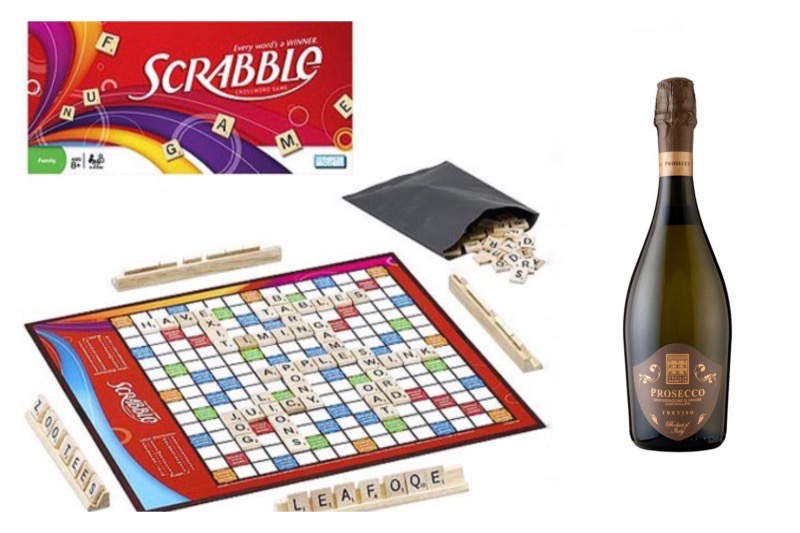 Are you ready to be capital “C” CLASSY? To dream of wearing oversized chunky sweaters on cool spring evenings and subtly snack on a cheese plate while enjoying a lazy sunset? Well then, this Prosecco is for you. Sipping on it luxuriously always makes me feel like I’m the lead in some Nora Ephron movie and Meryl Streep is my best friend. Enjoy it with a good game of Scrabble, hands down the classiest of board games. 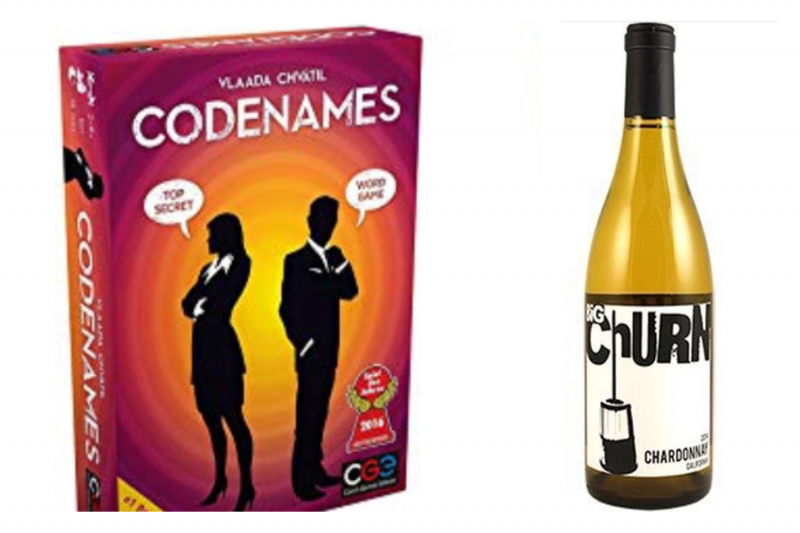 If you’ve ever played Password, you are well on your way to Codenames, where two teams race to identify the codenames of their “agents” with the help of one-word clues from the team’s “Spymaster.” You can play with any number of people, starting at just two and working your way up, which makes it ideal for any party size. The Big Churn Chardonnay is buttery and oaky, with a hint of vanilla. It’s ideal for slow slipping while you solve the puzzle. And oh hey – since we’re here, I wouldn’t want you gays to miss out on the Harry Potter version of the game. You’re very welcome. 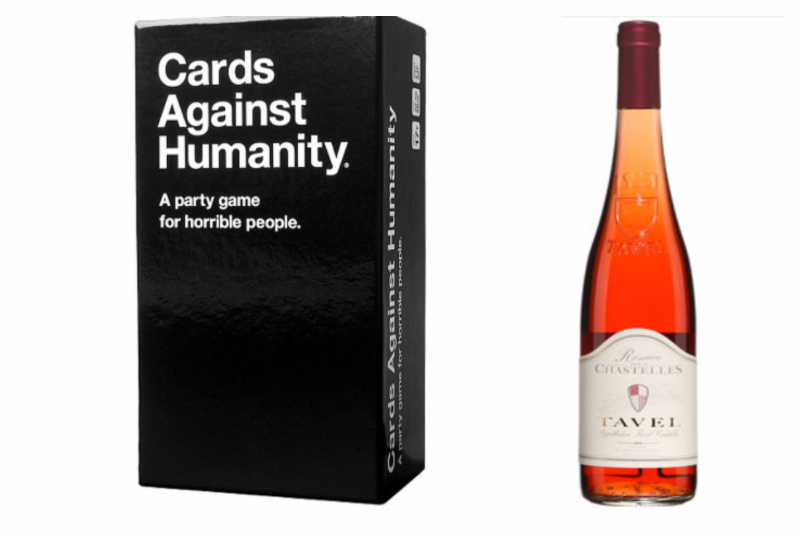 You’ve probably played Cards Against Humanity before; it’s become a staple of the last decade. But just in case, it’s a word/phrase matching game where your friends all try to outdo each other by doing their snarkiest, dirtiest worst to make you laugh. You declare the winner in each round. You’re all guaranteed to crack each other up and the Reserve des Chastelles Travel Rosé – with its bright strawberry and watermelon flavor – is  up for the challenge of keeping you hydrated between all the fits of laughter. 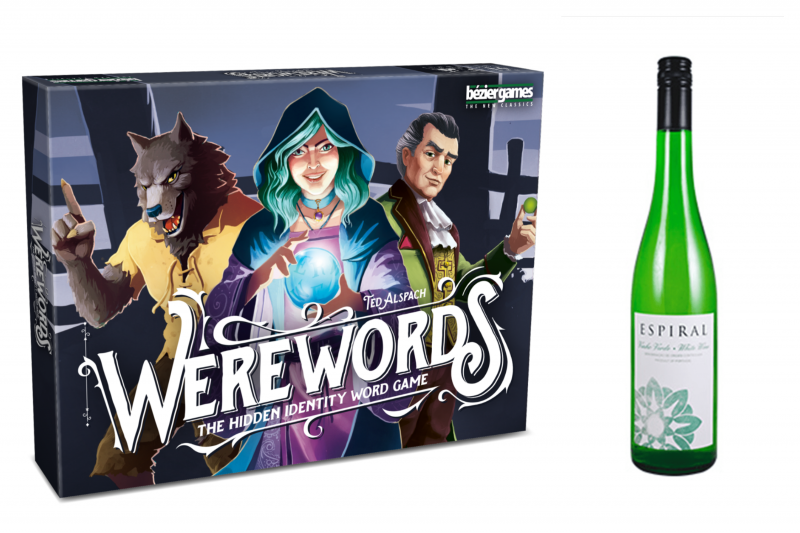 I had my first bottle of Espiral just this month, and I never want to go back to drinking any other white wine! It’s effervescent, crisp, and tastes like a bottle of Sprite went to a very fancy European study abroad. I can’t recommend it enough! A wine this bright deserves Werewords, a game where players must attempt to guess the magic word via yes-or-no questions before the four-minute timer runs out. One player is the Werewolf, who’s secretly working to sabotage everyone else. There are plenty of other roles for everyone and the rules are easy to learn, making it ideal for when your group is really gathered together to gossip and laugh, and won’t necessarily have all their attention tied to the game. 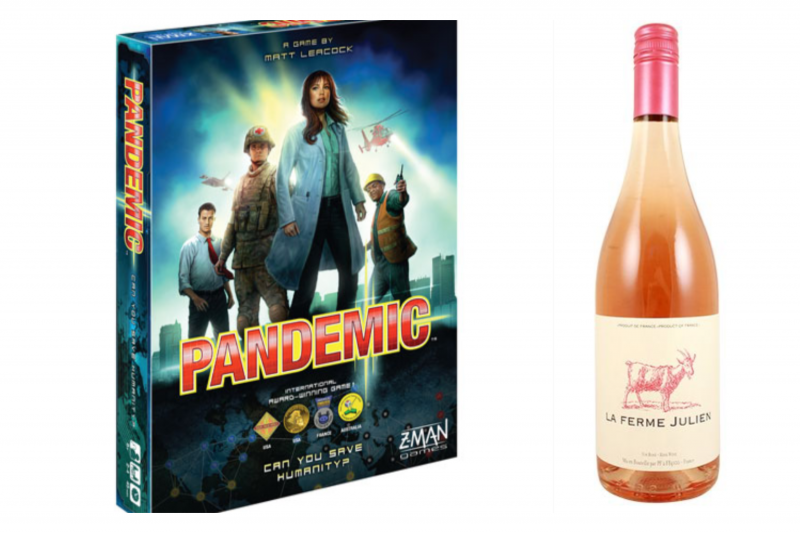 This is selfish. Pandemic is my favorite board game of all time. I could easily write love letters to it. The La Ferme Julien Rosé was my favorite wine last summer. Pairing them together is completely self-serving, but here we are. If you are a nerd who loves details and rules, Pandemic is for you. What makes it unique is that instead of squaring off against each other, your team must work together to beat the board. You are all fantasy members of the CDC (Center for Disease Control) who are fighting the clock against worldwide outbreak. It’s intense and passes time quickly; there are a dozen more ways to lose than to win. Before you know it, you will be addicted. Which is why this game needs a light bottle of rosé, something that you can drink for hours without getting wine bloat or feeling weighed down. 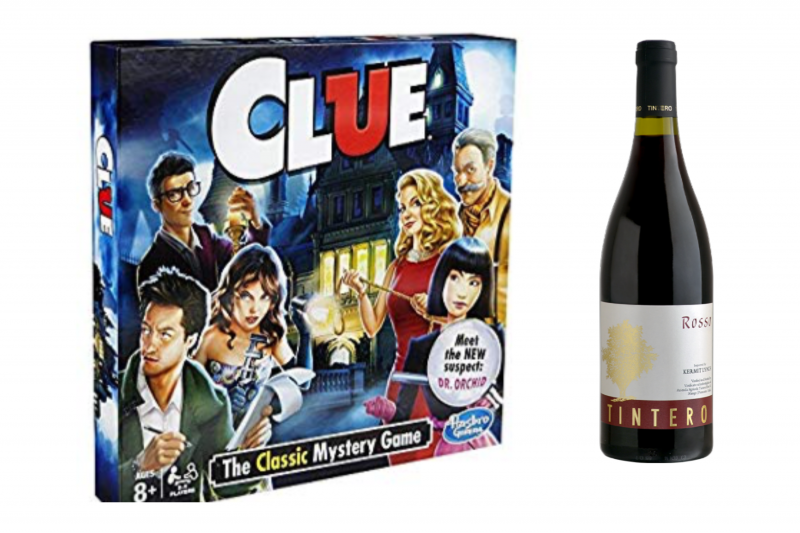 The Tintero Rosso is a red wine that’s built for spring. It’s easy to drink and has very little back-biting tannins. It even tastes best slightly chilled. It’s elegant, which is why I think it’s going to go great with a classic game of Clue. Have your friends try out their best British Posh accents as you work to solve who murdered who in the foyer or the office. BONUS: If you haven’t played the game in the last ten years, they’ve updated some of the murder victims and weapons! It’s going to feel like it’s the first time. 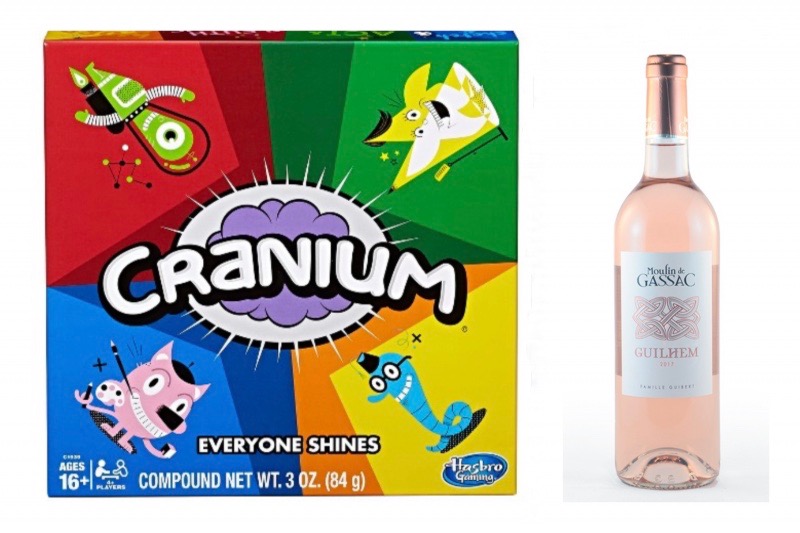 Have you ever played Cranium? I can never quite tell how popular this game is, but it was all we played in college. It’s perfect for large groups of people who aren’t scared to make an utter fool of themselves (or who are competitive about using all parts of their brain). Pictionary, Trivial Pursuit, Charades – Cranium has like four or five other classic board games all rolled into one. It’s hysterical fun, but takes a long time to complete, which is why I paired it with the Moulin de Gassac Guilhem Rosé. It’s simple, clean and easily drinkable – so be sure to pay attention and drink responsibly. 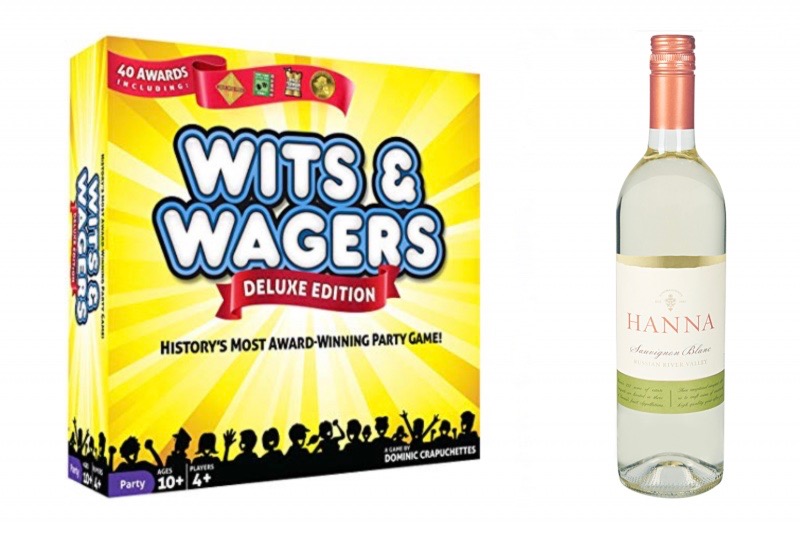 The #1 Thing that I hate about Trivial Pursuit is that it’s designed for the knowledge of middle class, middle age, straight white people. I know lots of trivia! None of it is ever in the actual game. That’s why I prefer Wits & Wagers, where you don’t have to get the questions right to win! In this game, you read a trivia question and everyone writes down their guess. Then you each place bets on who you think got closest to the right answer – if you’re feeling particularly confident, you can even bet on yourself. By earning points through betting strategically, you have a shot at winning the entire game, even if you never personally guess the correct answers. It’s also a great way to find out which of your friends thinks you’re a closet baseball freak or physics genius. Enjoy each other and the Hanna Sauvignon Blanc, with its grapefruit and lemon aromas. Drinking it feels like the wine version of smelling fresh cut grass, and who wouldn’t want some of that this time of year? 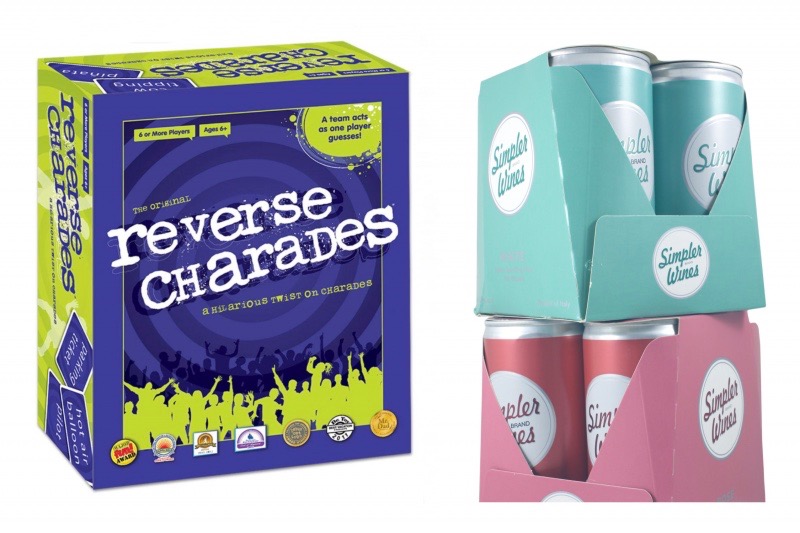 Hear me out: I know that “wine in a can” sounds like a terrible idea, but it’s actually brilliant. It’s portable and refreshing. It feels like you’re drinking a 1980s wine cooler in the back of a Ford truck with permed frizzy hair, except instead its 2019 and you’re in the back of a Subaru on your way to the beach. This wine is meant to be light, fun, and most of all on-the-move. Plus, it tastes great. Speaking of “on-the-move”, pair these cans with a game of Reverse Charades – instead of one person silently acting out the word for a team, the goal here is for the entire team to act out the word for a single person – and you’re guaranteed an excellent time.