Yesterday, in a flurry of emails and texts, I learned that YouTube’s Restricted Mode was specifically blocking LGBTQ+ themed videos. After initial public outcry across social media, YouTube issued a short statement on Twitter, maintaining that LGBTQ+ voices were a “key part of what YouTube was all about.” They went on to say that “the intention of Restricted Mode is to filter out mature content for the tiny subset of users who want a more limited experience. LGBTQ+ videos are available in Restricted Mode, but those that discuss more sensitive issues may not be.”

Having spent the better part of the past decade creating LGBTQ+ themed video content on YouTube, I immediately set my preferences to Restricted Mode to see what of that content was deemed too “sensitive.” Ten out of the twenty episodes of First Person, a series I worked on with PBS Digital in 2015, were blocked in Restricted Mode, and without any obvious connection to what might fall under the “too mature” umbrella and what would not: our episode on Sexuality & Comics and Non-Binary Identities remained available, while our episodes on Sexuality & Religion and Growing Up Intersex were restricted. Next, I looked to Everyone Is Gay’s channel and found that 151 out of the 216 advice videos I helped create over the span of six years — answering questions submitted by young people — had been blocked, and our entire channel was no longer listed in the search for “Everyone Is Gay.” Countless other LGBTQ+ YouTubers reported seeing similar things on their own channels, and even queer musicians like Tegan & Sara were having their content blocked in Restricted Mode. 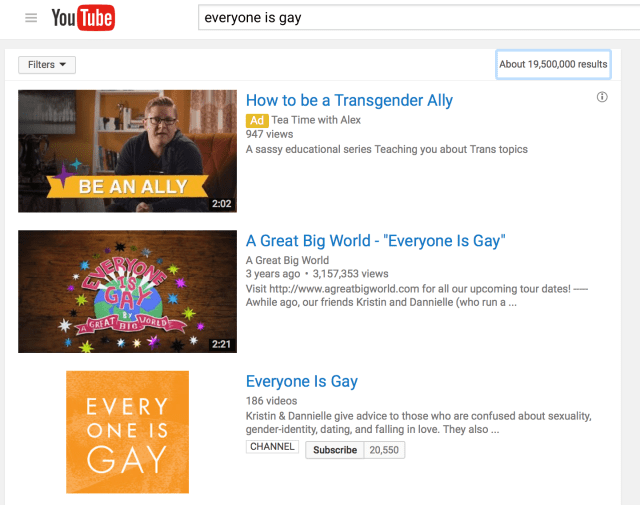 “Everyone is gay” search not in Restricted Mode. 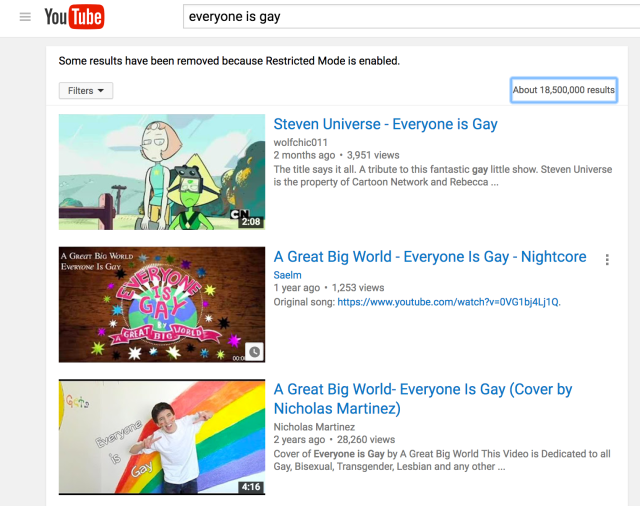 “Everyone is gay” search in Restricted Mode.

Apart from the brief statement issued yesterday, YouTube has not been especially forthcoming. From the page advertising Restricted Mode, we know that its purpose is to allow children and families to avoid seeing “potentially objectionable content,” and that it flags restricted videos using “community flagging, age-restrictions, and other signals to identify and filter out potentially inappropriate content.”

Words like “inappropriate,” “mature,” and “sensitivity” send a particular message when associated with LGBTQ identities — and these are often words that we hear thrown around by right-wing politicians and conservative religious leaders who seek to censor, limit, or otherwise oppress queer and trans people. The overt sexualization of bodies that are not both cis and hetero is precisely how battles are waged against our rights, the reasoning being that such censorship and inequality is necessary to “protect the children.” Countless young LGBTQ people have been taught, through hearing exactly these kinds of messages, that who they are is something that, by its name alone, is shameful, perverse, and inappropriate. This hypocritical idea of protecting children by making those same children feel shameful about themselves is not a new one by any means, but that a user-run platform such as YouTube — one that has fostered connections between communities that have never before been available — is especially dangerous.

I came out as bisexual in the mid-nineties; my first understandings of my sexuality occurred, shockingly, before I knew what the internet was… or, perhaps more accurately, before the internet knew what the internet was. I did theater in high school, which meant that I had a few friends who would totally make out with boys or girls,and once a year, right before the school musical, the entire cast and crew of the show would gather in someone’s family’s basement to take The Purity Test. (The Purity Test, in case you’ve never experienced the ritual, is a 500-question test where, based on your responses, you find out how “pure” you are. To the test’s credit, you lose the same amount of pure points for “roamin’ hands and fingers with a member of the opposite sex,” as you do for “shoplifting,” or for “using a live animal for anal play.”) What I am getting at is that my very first working knowledge of what it meant to be a gay person in the world was gleaned through talking with some teenage-hippie-sexually-fluid-friends and hearing the “same-sex attractions” section of The Purity Test read aloud to a room full of my giggling peers. And that, in 1995, was way more than most. 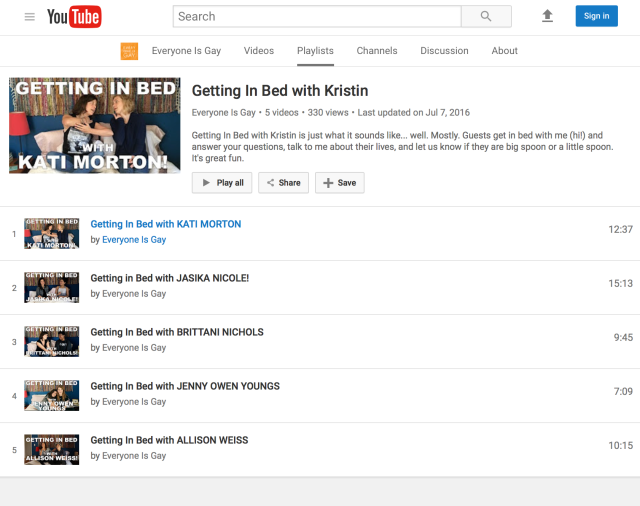 Getting in Bed with Kristin playlist not in Restricted Mode. 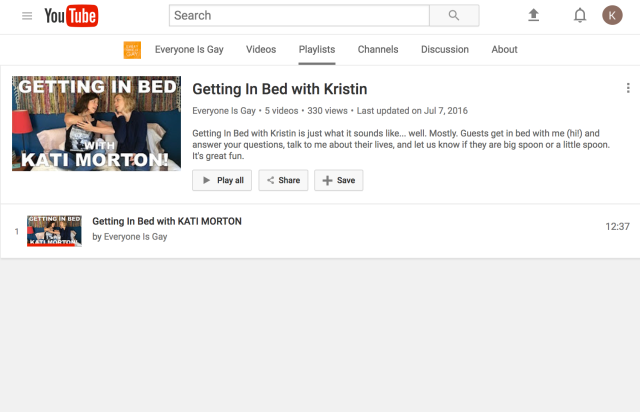 Getting in Bed with Kristin playlist in Restricted Mode.

Fifteen years later, in 2010, my work with Everyone Is Gay had just begun, and in July of that year we posted our very first YouTube advice video. Talking to my computer’s built-in camera was a bizarrely weird feeling then, and YouTube was so new that it wasn’t really possible to imagine or understand who would be on the other end watching (would anyone??). When people from across the country, and then the world, started calling in their questions for advice and commenting on our video threads, I was overwhelmed with the idea of my own 15-year-old self, and what it would have been like if she’d been able to see — actually see! — people in the world who were living as out, functioning gay members of society.

The following year, when we began to visit high school and college campuses, the impact of our reach hit me even harder. By the dozen, young people would come up to us and share their stories. A high school student in Santa Monica came up to us saying, “Your videos were the only thing I had that let me know I wasn’t wrong.”

“I am only here today — I am only alive — because I found your videos,” explained a 15-year-old girl who’d walked from her house to meet us at Brooklyn Pride.

“I found your videos, I watched them all, and then I immediately came out to my family,” shared a first-year university student in the UK.

These stories find me now at each and every event I attend, now also mixing in with stories from parents and educators who use my First Person videos to better inform themselves and others, and GSAs who use the Everyone Is Gay library as a gathering activity for their groups.

.@everyoneisgay taught me so much that I came out to my parents within a week of finding them. These videos legitimately change lives. https://t.co/DmbXANXj6u

@everyoneisgay taught me to love myself. Idk where I'd be without them. To think that young ppl could lose this resource is heartbreaking. https://t.co/jHG86mLzJG

Slipping in to remind people that @everyoneisgay was likely the single most indispensable resource during my (self-& otherwise) coming out! https://t.co/gSQJ3ruTQD

I am not a researcher, and I am not a scientist, but I have spoken to hundreds of thousands of LGBTQ+ young people over the past decade, and there are a few threads of those experiences that run deep. Seeing representations of LGBTQ+ people in the world, diverse, complete, and honest representations, saves lives. Getting those representations accurately portrayed in mass media is a long and uphill battle (and one worthy of fighting), but creating our own content on platforms like YouTube serves as an incredible intermediary tool to let young people, especially, know that they are valid, and that their lives matter. Young trans kids have been able to connect with YouTubers who have documented their transitions, and are able to get education and resources that are, quite literally, not available anywhere else. Young queer kids who are questioning their identity have turned to YouTube since its creation to share their own struggles and to find others who can help to let them know that questioning is normal, that being queer is wonderful, and that there are hundreds of thousands of us out here who not only understand but who will have their backs every step of the way.

The message that is now being sent by YouTube’s decision to specifically flag LGBTQ+ content, and to limit access to some of the only accurate, positive, and truthful depictions of LGBTQ+ experience that exist, is not only offensive — it threatens the very existence and lives of young LGBTQ+ kids who, more than ever before, are being told by the world around them that they do not deserve the same protections, respect, or rights as their cisgender and heterosexual peers.

Hey guys! We're available to chat if you guys want to explain why advice sites like @everyoneisgay is now restricted. Or why our dancing is! https://t.co/89MFvYSRS5