I don’t know about you, but I am forever complaining about the lack of women’s voices in conversations that center around women and sex. You’d think by being one of the subjects we’d automatically be considered one of the experts on the topic, but oh no, that would be way too reasonable. Instead we’re relegated to the background while society serves up images of what “sex” and “sexuality” mean in relation to women, and if we dare comment we’re deemed either a “slut” or a “prude” or my personal favorite, “crazy.” It really seems that despite placing the idea of women in the foreground of so many conversations about sex, nobody actually wants to hear from us what we think or feel about the matter. Until now.

Subjectified: Nine Young Women Talk About Sex is a documentary directed and produced by Melissa Tapper Goldman that has a mission as straightforward as its title: allow women to talk about sex. No weird outside narrative. No horrific commentary from bros who want to argue the reality of rape culture. And no direction or restrictions on what can or cannot be said. This film is quite literally nine young women talking about sex. They are diverse and they are honest and they are perfect, not because I agree with everything they said (I don’t) and not because I see myself in each and every one (how could I?) but because they are talking openly about sex and in a world that makes a habit of telling women to shut up, the mere act of speaking up is revolutionary. 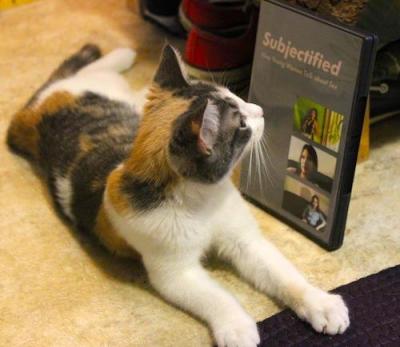 this cat has superb taste in documentaries
via subjectified kitty series

I guarantee you won’t agree with every word each woman utters, because they offer nine very different perspectives on an extremely personal subject, but I can also guarantee that you will be on the edge of your seat throughout the whole film, because the concept itself is so very exciting: nine young women talking about sex! It bears repeating over and over because it is so rare. This is a film wherein not one, not two, but nine young women are given a space to tell their stories. It is a response to the silence that usually shrouds this subject, not because women have nothing to say about sex but because we are actively silenced. Subjectified takes women out of the demeaning role of “object” and into the powerful role of “subject” and it is so satisfying and yet so simple, one wonders why it hasn’t been done before. 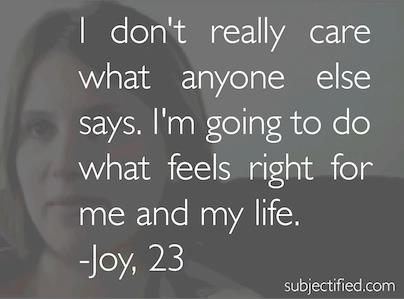 you do you
via subjectified

But it hasn’t, not really, and the truth in that statement becomes clearer as the film progresses. When women tell stories we are told we are over-indulgent or self-absorbed or frivolous or overshares. When men tell those same stories, slotting women in over and over as the same one-dimensional characters, they are lauded as honest and brave. This film, which is both honest and brave, uses a very simple medium to expose voices that are rarely heard, and it does so in a respectful and open way. Nothing about the interviews seems gratuitous or titillating for the sake of an audience, and the one-on-one format gives audience members the impression that the women speaking have been made to feel as comfortable as possible. Really, no matter how intimate the conversation becomes, the only feelings of awkwardness stem from the realization that women’s voices are rarely heard in the dialogue about sex, and yet they are essential.

If you’re interested in hearing these voices yourself and engaging with the filmmaker behind this project, you’re in luck! There will be a free screening followed by a Q&A with Melissa Tapper Goldman this Wednesday, December 5th at 7pm at the YWCA of Brooklyn, 30 3rd Avenue, Brooklyn, NY, co-sponsored by Subjectified and Sadie magazine. RSVP is preferred, but not required. If you’re unable to make the screening, never fear! There are many other ways you can engage with the film and its mission. Check out the “YOU!” tab on the film’s website to learn how to best use Subjectified as an individual learning tool and as a resource for campus groups, educators and institutions.

Join A+
Related:documentarieseventyou should go