If you’ve been craving a Broadway fix of the Sapphic kind, you’re going to be very excited to learn about LezCab, a monthly cabaret by, for, and about queer women. And if now you’re thinking, Hmmm, LezCab sounds familiar, it’s because the brand-new monthly event kicked off its awesomness during International Autostraddle Meetup Week, when Autostraddle’s very own risen star Haviland Stillwell performed and all proceeds went toward this very website and Unicorn Plan-It. This may be a brand new event on the New York City entertainment circuit, but it’s one you’re gonna want to get to know really fast, trust me! 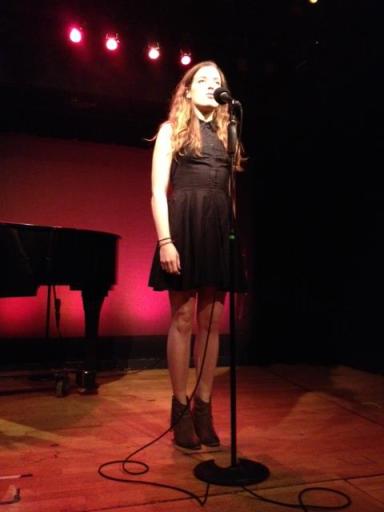 The ladies behind LezCab are all MFA students in the Graduate Musical Theatre Writing Program at New York University’s Tisch School of the Arts: there’s Grammy Award winning artist Thirza Defoe, librettist/lyricist and Autostraddle bruncher extraordinare Rachel Kunstadt, and composer, playwright, and musician Teresa Lotz. In their own words, the creators of LezCab say that the program “seeks to produce and host musical-theatre events by and about queer womyn in order to foster support and a forum for queer womyn in the musical theatre community,” but the vibe is super inclusive at the same time. “We’re creating a community here, not an elitist cult,” the FAQ page explains in response to a query about having to be a queer woman to participate. “If you’re an ally, you’re a part of this! We might not be singing songs about you, but you’re just as important to us!”

The inaugural LezCab boasted a packed house and was hosted by Maggie Keenan-Bolger. She will return to host November’s LezCab, which takes place next Monday, November 26th. That performance will feature In The Heights and Bring It On’s Stephanie Klemons, as well as many other talented queer women in the musical theatre community, from seasoned Broadway professionals to up-and-coming talent. It’ll be like Glee but with more openly queer characters, less horrific plot lines, and absolutely zero Ryan Murphy — plus it’ll be real life not teevee! Which is to say, it will be perfect. Have fun!