Eventually, I figured out how to illegally download The L Word, which offered more examples of lesbian sex, but after the many, many references to “glistening” latex gloves in Valencia, I was surprised that The L Word characters never seemed to practice or discuss safer sex. Would I need to use barriers once I started having sex? I had to do my own research.

My straight parents couldn’t teach me about queer safer sex. My high school health teacher breezed through a unit on birth control, and while the information was more comprehensive than what’s offered in some schools, gay sex was never addressed. So I took up residence in the back corner of my town’s chain bookstore, which miraculously carried an old edition of The Whole Lesbian Sex Book that I read cover-to-cover and never bought. I also spent late nights browsing Scarleteen. I learned that latex gloves were popularized during the HIV/AIDS epidemic of the ‘80s and ‘90s and that most folks don’t use them for practices other than fisting, since hand sex is relatively low-risk. I also learned about dental dams, which protect against STI transmission during oral sex and genitals-on-genitals sex. That same year, I attended the Chicago Pride Parade, where safer sex advocates tossed dams in shiny squares of plastic from a float. Thrilled, I swept them up, put them in my bag and promptly put them to use.

There are plenty of effective safer sex practices that don’t involve using barriers, including fluid bonding, practicing mutual masturbation, using sterilized sex toys, sticking with gloved or non-gloved hand sex, regularly testing for STIs and more. Throughout my teens and 20s, I had a lot of sexual partners and oral sex was often part of the picture. While my safer sex practices weren’t always perfect, using dental dams on a regular basis in addition to regular STI testing felt like my safest, most comfortable option. For me, using dams felt empowering. They allowed me to let go of worry and focus on pleasure, which is probably why my early sexual experiences were so positive. And I found that dams weren’t only useful for safer sex — a grape-flavored dental dam supported my very first rimming experience when I didn’t feel totally ready to taste an ass (in retrospect, I would have chosen any flavor other than grape). But throughout my years latex licking, I’ve usually been the person introducing my partners to dental dams, and in conversations with my queer friends, it’s clear that most people in my social circle never use dental dams and consider them a blast from the past. And my friends aren’t alone.

While there aren’t many studies on dental dam use, a 2010 Australian study found that among 330 “women who have sex with women,” only 9.7% of those women had ever used a dental dam and only 2.1% of those women used dental dams on a regular basis. In 2019, Good Vibrations staff sexologist Carol Queen told the Atlantic that the company usually sells fewer than 600 dams per month across 13 stores and its website. So if dental dams are so great (at least in my sex life), then why aren’t people using them?

First, dental dams aren’t as readily available as condoms, which are sold in most drugstores, are available for free at many health clinics and can be turned into a small DIY dental dam in a pinch. Also, most people aren’t lucky enough to be showered in dental dams at a parade — dams are typically sold in sex toy stores, which aren’t easily accessible to everyone. Even when dental dams are available, folks with latex allergies might have trouble finding polyurethane and nitrile options. And if you’re not having the kind of sex where you can easily hold a dam in place, using a dental dam can be tricky.

I talked to Lee Andel Dewey, a non-binary person who recounted using dental dams with a former partner who has herpes. “For us, they were a necessary barrier, but dental dams sometimes feel too small,” Dewey said. “When you’re rubbing vulvas together, using dental dams to mitigate risk has been like, ‘Well, that worked for five seconds and now we’re just pulling a dental dam out from between our legs.’ That’s not helping anything.”

Companies like Lorals are trying to solve that problem by selling single-use latex underwear, which covers more surface area and doesn’t need to be held in place with your hands or with a harness, but Lorals underwear are relatively pricey and aren’t sold in many brick-and-mortar stores. To get more surface area coverage at a much lower cost, Lee said that they’ve occasionally used Seran wrap for safer oral sex. While non-microwavable plastic wrap is recommended by Planned Parenthood as an safer sex barrier when dental dams aren’t available, its effectiveness is under-studied.

So does this explain dental dams’ lack of popularity? Are sex-havers eschewing dental dams in favor of larger, more affordable, more accessible plastic wrap? Maybe. But plastic wrap is typically thicker than dental dams, so dams remain a much better option for folks who want to prioritize sensation. Are most people making dental dams out of condoms instead? That’s possible, too. But according to Courtney Trouble, a queer porn creator and performer known for making work that features safer sex, there might be a deeper reason why dental dams aren’t en vogue — using any barrier for oral or genitals-on-genitals sex is often considered “unsexy” and “uncool.”

Dewey agreed. They facilitate a regular women/ trans/ non-binary cruising night at a Chicago leather bar that offers free condoms and dental dams to patrons. “People will be like, ‘Oh, there’s a dental dam here. What are we ever going to use this for?’” Dewey said. “Or ‘Ooh, retro! Do people even use these? Did people ever use these?’” 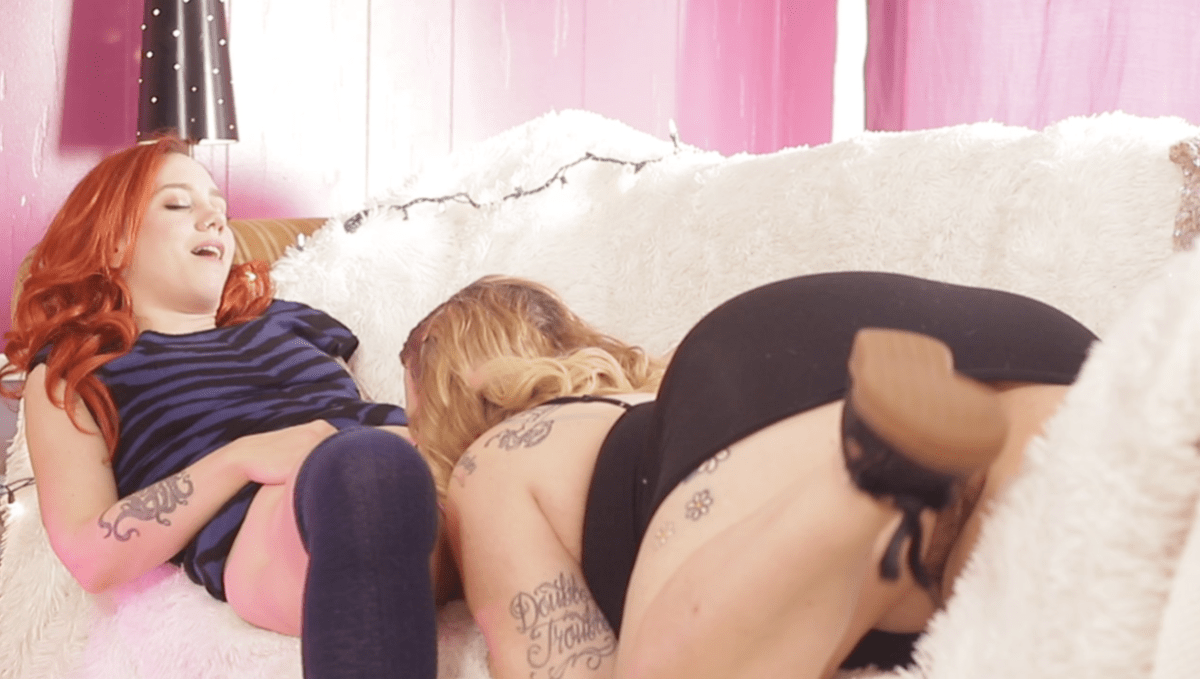 Of course, not everyone gets aroused by the look and feel of dental dams. For those who could benefit from dams but don’t find them particularly titillating, Trouble recommends incorporating dams into power play. “You can play with dental dams as a form of tease and denial,” Trouble said. “Like, ‘Oh, doesn’t this look good? Don’t you wish you could taste it? Well, you can’t taste it today. You can’t smell it today.’”

Dental dams can also serve a practical purpose beyond safer sex. Do you have a hyper-sensitive clit? Use a dental dam to more comfortably receive oral sex. Do you, like my younger self, fear the taste of ass? Throw a flavored dental dam between your partner’s cheeks and go to town. The comprehensive resource guide Trans Bodies, Trans Selves even recommends dental dams as a gender-affirming barrier for trans folks who experience bottom dysphoria: “Most of us have particularly sensitive areas on the tip and along the underside of our bits, large and small, that we may enjoy having licked during oral sex. For those of us with larger bits, our partners can use their hands or a dental dam to flatten our genitals onto our body to receive different kinds of stimulation and attention.”

I know that my experience with dental dams is unique — I happened to learn about queer safer sex (and fisting?! — thanks, Michelle Tea) earlier than most, and after years of using dental dams, I’ve figured out how to use barriers in a way that doesn’t feel totally awkward. But that’s just what works for me! There is no universally “right” way to practice safer sex — each person’s circumstances and needs are unique, and your best safer sex option is whatever makes you and your partners feel the most comfortable. If dental dams are part of your practice, great. If not, know that they’re out there and know that people do use them. If you’re curious about using barriers as a safer sex practice, ask your local health clinic or LGBTQ+ center if they offer free dental dams that are made from a material that’s safe for you to use, look for them at your local sex toy store or snag a few online. You can even cut up a condom or use a sheet of plastic wrap. Make sure to read Carolyn’s how-to guide to ensure that you’re using dams and other barriers correctly. And if you’re nervous about bringing safer sex barriers to your next hookup, here’s what Courtney Trouble has to say:

“Whipping out your safer sex supplies during a hookup is a show of confidence to me,” they said. “Like there’s the whole thing of bringing over the backpack — you’ve got the strap-on and a bunch of dental dams and some lube and Hitachi and I’m like, ‘Oh, you’re in. We’re good to go!’”

Ro has written 74 articles for us.