Previously on Wynonna Earp, Wynonna and Haught road tripped to an abandoned Black Badge outpost where they found a teenager who could match Wynonna quip for quip… and also zombies. Waverly and Doc were stuck in the Garden with a bloodthirsty machine and a lot of mysteries, and were eventually joined by the naked form of Nicole Haught.

We open with Wynonna yelling down the grate hole Nicole fell through, demanding she stay alive OR ELSE. Rachel Valdez saves her from zombies who are drawn to her shouting and tells her to shut up and that they have to keep moving.

Now, for the Garden storyline, I’m going to do something a little out of the ordinary for these recaps; normally I would treat each scene with the amount of knowledge we had while watching the scene from the first time. But I think there were some brilliant writing/acting/directing choices made here that I want to talk about so I’m going to shake things up. We later learn that the Nicole in the Garden is actually Eve (Kevin wasn’t kidding when she said, “Don’t get me started on that girl.”) using other people’s faces as pointed manipulation. And the clues were there from the start. For one thing, Nicole is dressed in her classic Season One french braid. Second of all, Doc had to point out to her that she’s naked. 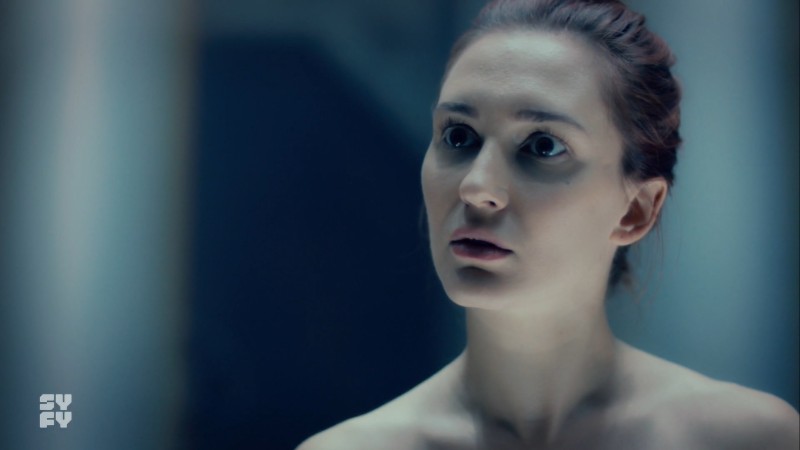 The real Haught is in a starchy uniform 90% of the time, surely she would have noticed the breeze.

When she realizes she’s naked she does her best to cover up, but Doc can’t give her his coat since it turns out Not!Haught is in some kind of barrier circle.

So Doc decides to go find Waverly, and Not!Haught likes this plan, a little mischief in her eyes.

When Doc finds Waverly, she’s reading the book she chose, but quickly shuts it and tries to deflect when he approaches. When he sees the cut on her arm, he scolds her for feeding the machine, but she says she has to protect the Garden. Doc tells her to cut it out with the scary cult-like talk and that Nicole is there, she scolds HIM for burying the lede. 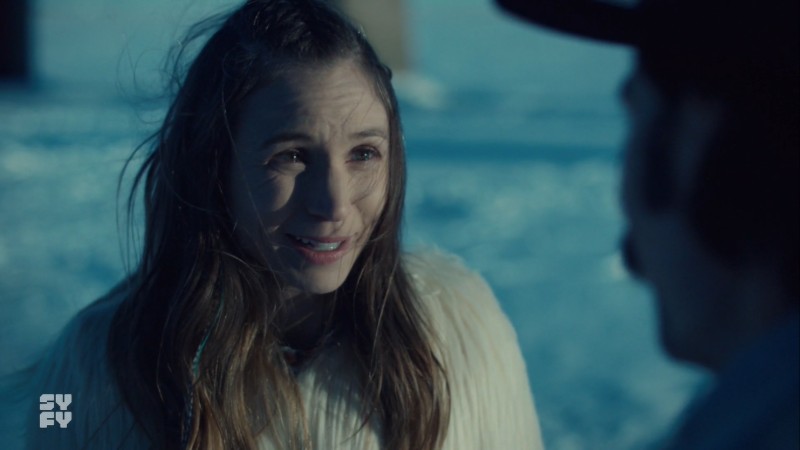 “We could have had the rest of this conversation on the WAY to see my girlfriend.”

They rush back to Not!Haught together.

Back in Monument, Wynonna convinces Rachel to lead her to where she thinks Nicole fell to, and also to the Gateway the BBD scientists had been working on. Rachel just wants to know if her mom is alive or not, and promises that she can kill her mom herself if she’s a zombie. 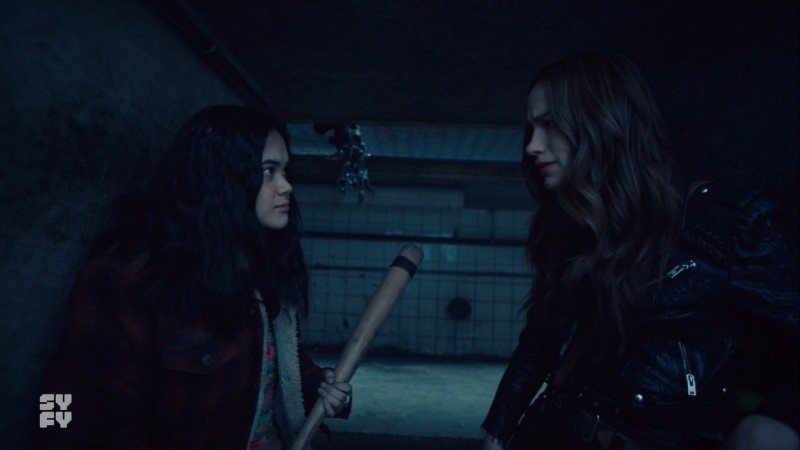 I love these two together so much I don’t even have a good joke for this caption.

Wynonna really wants to tell her that she already knows that Gloria Valdez is likely dead, from the file she found, especially because she knows all too well what it’s like to have to kill a family member for the greater good and wouldn’t wish that upon anyone, especially not her new favorite teen, but she chickens out before she can confess.

But they do decide to work together, feeling a kinship, and keep moving. 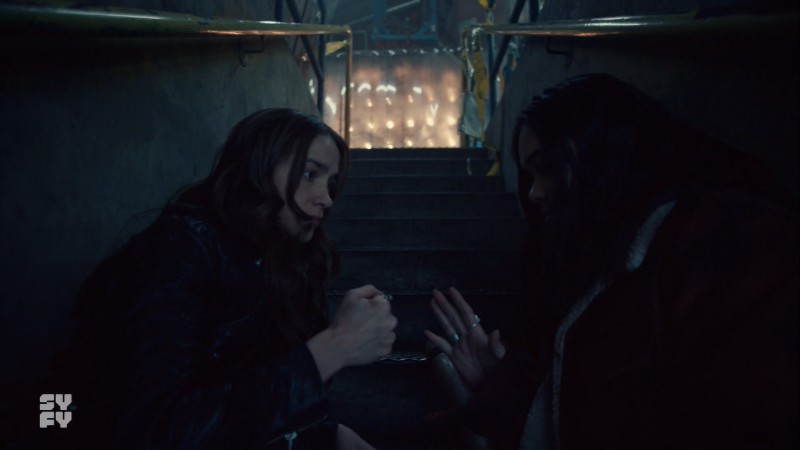 When Waverly finds what appears to be her naked girlfriend, Not!Haught motions for Waverly to come closer and when Waverly can’t get through the barrier either, her face darkens. It’s a quick moment, a flickering shot, but it’s brilliant. 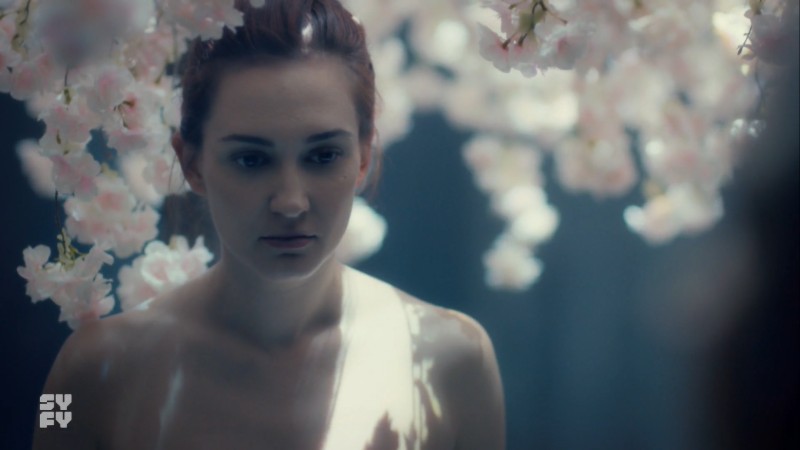 Honestly Kat Barrell is really stepping up her game this season already.

Waverly in her happiness of seeing another familiar face in the Garden says, “It’s really you,” with disbelief in her voice. 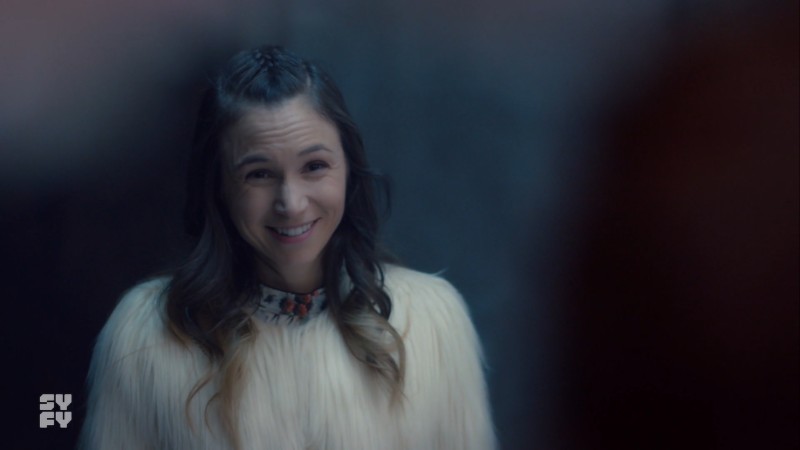 Not unlike Wynonna, I would also kill anyone and everyone to keep a smile on this woman’s face.

Not!Haught says, “Who else would I be?” in a voice that was very reminiscent of Jolene pretending to be just a regular gal pal to the Earps back in Season Three. 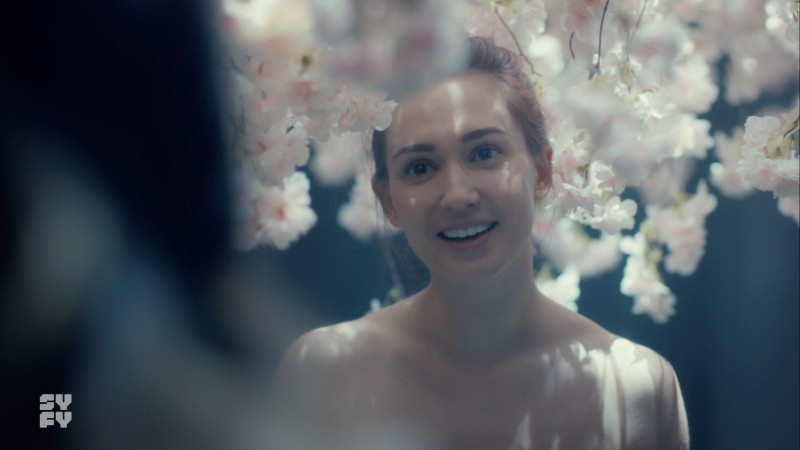 I don’t like how much info Eve seems to be able to glean from someone when she steals their face.

Our first piece of evidence that Not!Haught is not who she seems is that because at this point we go back to BBD and see that the real Nicole Haught is on the floor where she fell, alive but with a broken leg and a zombie slowly crawling toward her.

In the Garden, Not!Haught fashions herself a cherry blossom bikini, (which Waverly jokes is from the Isle of Lesbos Reserve Collection) and subtly suggests that maybe Waverly and Doc try not feeding the hungry blood machine, just to see what happens. Doc doesn’t want to risk it though, so he runs off to feed it.

Meanwhile, as the churning of stones gets louder, Waverly can also hear something else. Her throne, it’s calling to her. Not!Haught says that she’s already sacrificed too much, encouraging her not to go on the throne, and you can see her starting to lose her patience. 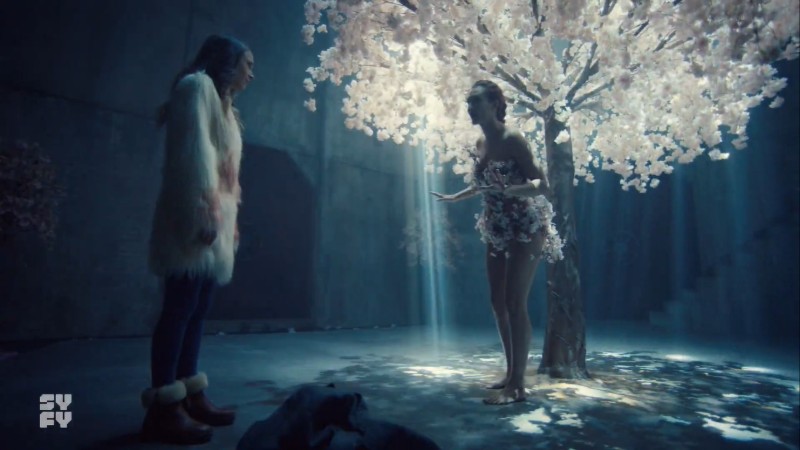 These first two episodes were full of such stunning imagery I can barely stand it.

The facade is fading as she spits cruel insults about Doc, and calls Waverly “baby” more than a cheating boyfriend in a Destiny’s Child song. Waverly can’t quite put her finger on it just yet, but something isn’t quite sitting right with her. 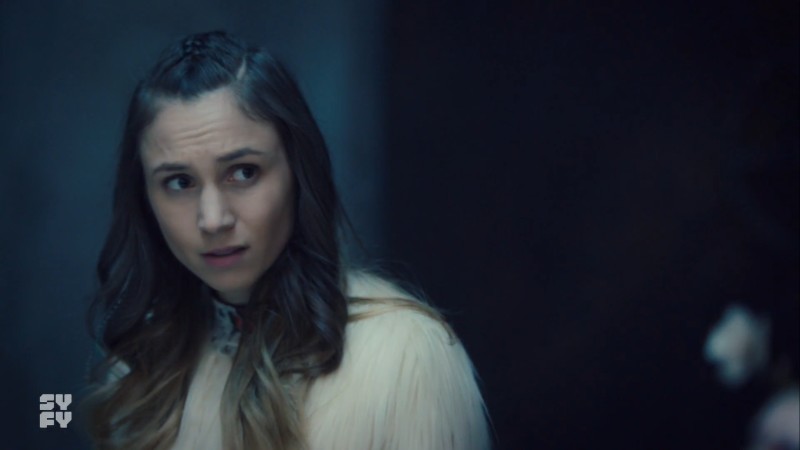 Meanwhile Doc is about to feed the machine when a door opens and he strolls right through it, because this Garden can apparently gently guide people to do things.

The real Nicole is still lying on the ground telling the approaching zombie that she wanted to die with Waverly in Sara Lance cosplay holding her in her arms, which almost made me spit-take because I love little more than when my favorite shows reference my other favorite shows. Also this reference has been blessed by Sara Lance herself.

After a series of sex jokes and a wee lack of oxygen debacle, though, Wynonna and Rachel get there just in time to save her from getting bitten.

Waverly, still unable to put words to it but her natural intuition kicking in, asks Not!Haught
Waverly asks her where her ring is. 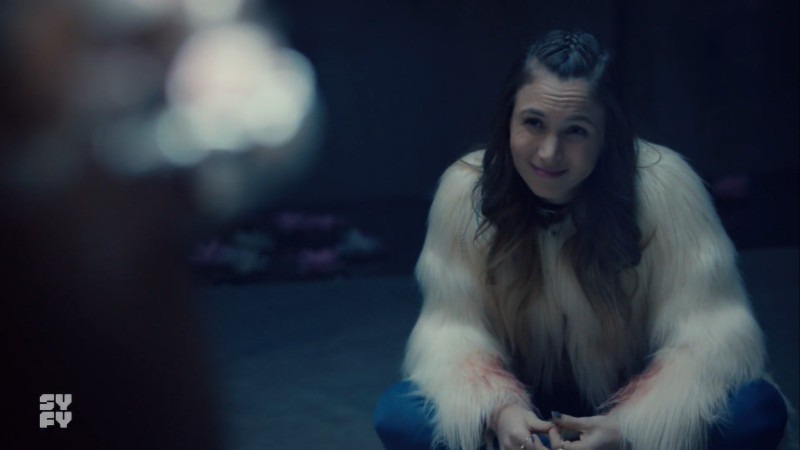 Could she BE any cuter?!

But Eve can’t resist digging on Bulshar and complaining about how there hasn’t been a god around these parts in 84 years. (Give or take some millenia.) Waverly tells her about the man they found who called the Garden a prison, and asks Not!Haught about if she’s mad Wynonna drugged her… it seems a little weird that wouldn’t have been one of the first things she mentioned. (Which is such a good instinct Waverly has; it was indeed one of the first things Nicole thought when she woke up, and also she immediately punched Wynonna about it upon finding her.) But when Not!Haught instead changes the subject to how desperate she is to get out, Waverly side-eyes her some more. 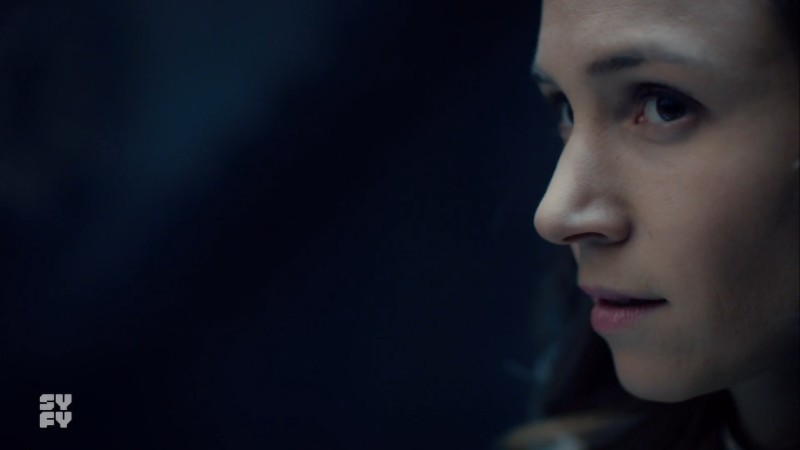 Like she told Champ in Season One, beauty and brains aren’t mutually exclusive.

When Doc gets through the room to the Garden, he sees Nicole’s face on some stones but like a creepy art installation, when he walks around the pedestal, he sees Not!Haught’s true face… and it ain’t pretty. (I mean, the facts ain’t pretty. Eve’s demon face is still kinda hot. I think. I’ve also been social distancing for 145 days.)

So despite the machine going haywire for not having been fed, Doc runs back to Waverly and the demon he left her alone with.

Rachel checks Nicole’s leg and determines that, in her professional opinion, it is hella broken. 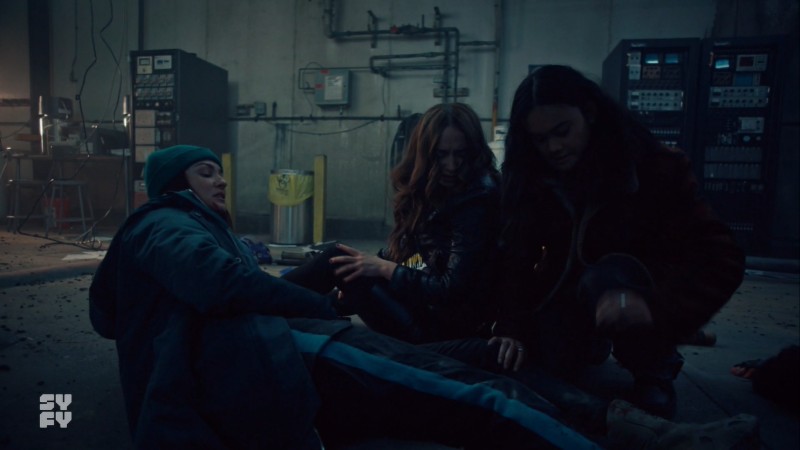 Wynonna gives Nicole back Waverly’s ring, and just in case she doesn’t make it out of this sticky situation, Nicole makes sure Wynonna knows that she absolutely is going to say yes to Waverly’s proposal the second she has a chance. And that’s when they realize that there’s a dead body in the room with them bearing Gloria Valdez’s Black Badge ID. Rachel interprets this situation to mean that her mom died keeping the door shut, so she whips out a gun and says she’ll do the same.

In the Garden, the machine goes unfed, and the barrier keeping Not!Haught contained disappears. 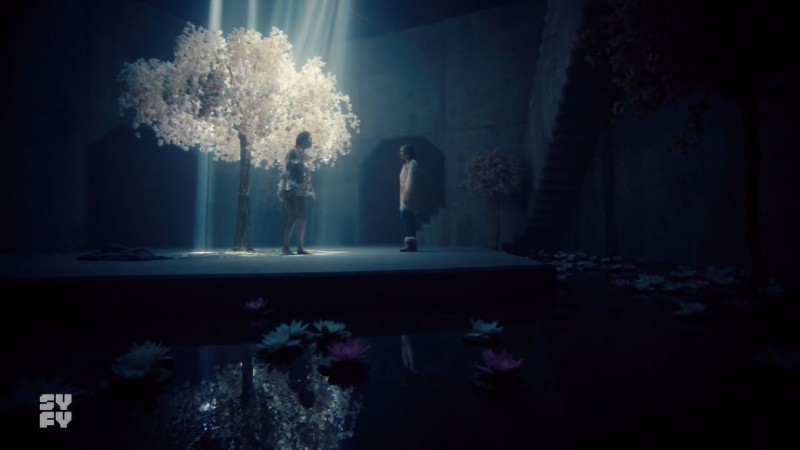 I’m sure letting someone who can steal faces loose is totally fine.

So she grabs Waverly’s hand and drags her outside. As soon as they’re out there, Waverly pulls her in for a kiss, but Not!Haught isn’t having it. 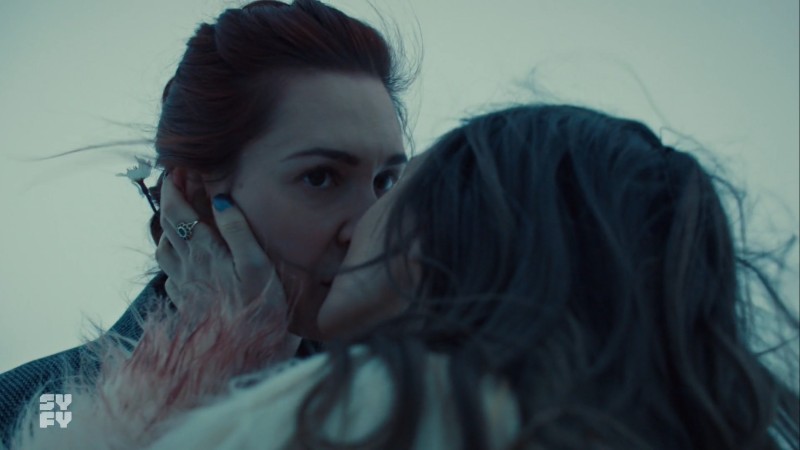 “Should have known you was trouble from the first kiss. Had your eyes wide open… Why were they open?”

And Doc is running up to tell her as much, but Waverly realizes it on her own just in time: This isn’t her girlfriend. Also she tastes like sulfur. Waverly immediately worries about the real Nicole but the imposter in front of her says her name is Eve and she’s ready to watch the world burn. 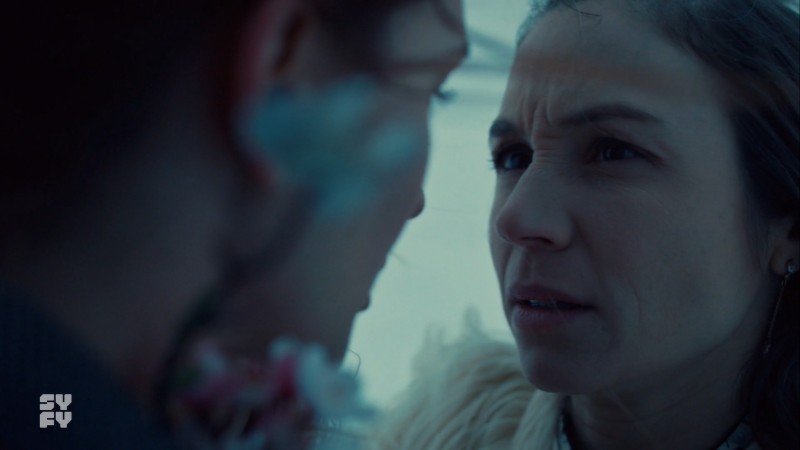 Eve, still presenting as Nicole, is dragging Waverly around by her hair when Doc shows up to be the weapon he promised to be. But as soon as he punches Eve, she changes form to be Jeremy instead, appealing to Doc’s soft spot for the nerd.