It’s April but guess what? March Madness is still in my life and I’m so happy about it. Sunday night was the women’s NCAA Final Four in Indianapolis. After the tournament is over, everyone should get the hell out of there. No really, leave.

When Stanford ended UConn’s 90 game win streak in December, everyone penciled in the rematch for the NCAA Championship. A pair of number two seeds had something else in mind. There hasn’t been a championship game on the women’s side without a number one seed since 1994, so what happened last night was kinda sorta a big deal.

The first game saw #2 Texas A&M upset #1 Stanford 63-62. I felt good about this because if I had to watch Stanford sulk around after being knocked out of the tournament by UConn for the third year in a row, I might have clawed my eyes out. 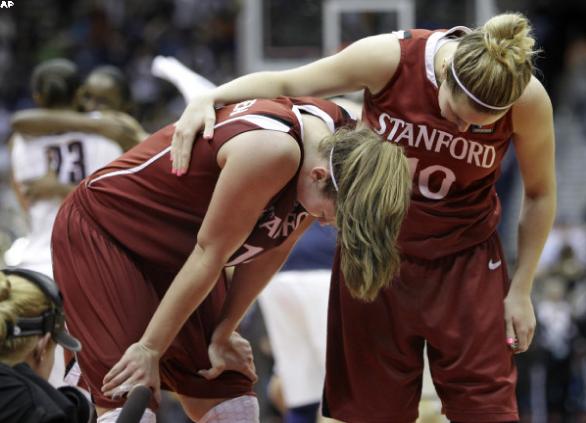 Though Stanford lost, Coach Tara VanDerveer is even more of a bawse in my mind for having the faith in her players to give Melanie Murphy significant minutes off the bench in such an important game. She was their spark plug in key moments while Kayla Pederson struggled. Nnemkadi Ogwumike carried the team with 31 points.

The second game of the night was a Big East battle between Notre Dame and UConn. Skylar Diggins led the Irish to a 72-63 victory with 28 points. This ended the Maya Moore era which is sad for UConn but great news for everyone else. There is no denying that Maya Moore was one of the best college players of all time if you couldn’t tell from the various interviews, montages, and clips of her shown before and throughout the game. Maybe ESPN knew UConn was going to lose so they had to get it all out? Anyway, she finished with 36 points and probably a bit of an attitude because the rest of her team played like they were too busy staring dreamily at Diana Taurasi in the stands. They probably were.

And speaking of things that were happening in the stands, holy bajeezus how gay did it look when the camera would show Diggins do something good then cut to Candice Wiggins celebrating in the crowd then cut back to Diggins smiling on the court? There was some story about them becoming friends during Skylar’s official visit to Stanford but that’s no fun. I like to play a game called Big Lesbian Announcer, in which I point out all the super gay things going on that they won’t talk about on TV. In last night’s game of Big Lesbian Announcer, I pretended the cuts to Wiggins were “girlfriend reaction shots.”

I had to do something to counter what was happening on Twitter. At one point Candice Wiggins, Maya Moore, Skylar Diggins, and Candace Parker were all trending at the same time and I thought, “YAY! People care about women’s sports!” But most of the tweets were from straight guys debating who was the most attractive so no feminist high fives were thrown.

If Lil’ Wayne can take time out of his day to spell the word luck wrong in a tweet to Skylar Diggins, I think you can make time for the championship. The game is Tuesday, April 5th at 8:30pm EST on ESPN. I think Notre Dame will take it but my number one feeling right now is more Sydney Colson on my TV screen.

Who do you think will win? How are you feeling about UConn and Stanford being knocked out? What was your favorite part of last night’s broadcast?