It was never about the heist.

That might surprise you about Widows, which from every trailer sets itself up to be a classic robbery film. Veronica Rawlins (Academy Award Winner and Autostraddle favorite Viola Davis) has been living the high life in wealthy Chicago, full of meticulously selected art on her apartment walls and the cutest white fluff ball of a dog as her companion. This life isn’t all it first appears, but it’s been paid for by her husband, Harry (Liam Neeson), who doubles as a criminal mastermind. When a major robbery goes awry, Harry loses his life along with the rest of his crew. The problem? They owe a debt to the man that they robbed. With her life on the line, Veronica teams up with the other widowed women of the crew to pull off one last robbery job and finish what their husbands failed to complete.

The movie’s directed by Steve McQueen, whom you may remember helmed 12 Years a Slave, the first motion picture by a black director to ever win a Best Picture Oscar. The screenplay is co-written by Gillian Flynn, whom you may remember from Gone Girl. The movie’s adapted from the 1983 British television series of the same name. That’s all well and good and important, but look, all of these incredibly impressive bonafides aside – my favorite genre of popcorn films are “kickass, smart-ass women with guns.” My favorite ’00s action hero is Angelina Jolie by a significant mile. I was always going to be an easy sell. They told me Viola Davis and Michelle Rodriguez were going to shoot up some shit, steal some shit, and I was there.

Usually, these kind of team ups involve a lot of men. The tech or gun specialist? A man. The safecracker? A man. The driver? Definitely a man. The brains of the operation? Do you even have to ask? Even on a surface reading, it’s not hard to figure out what sets Widows apart.

Still, I didn’t quite get the movie I was expecting. Widows is as much a brooding meditation on gender as it is a heart-thumping, tension ridden action-suspense thriller. While there are certainly moments purposefully designed to elicit gasps and applause from the audience, I’d hardly call it a mindless romp. If glamorous gal pals whom you can enjoy without much thought is what your looking for, I suggest you fire up Ocean’s 8 again (No shade! I’ve seen it three times already. Cate Blanchett on a bike forever and ever Amen.) The widows have real shit to deal with.

This isn’t a film where the diversity on screen is just for self-congratulatory pats on the back. Every woman on the team is dealing with her own race and class intersections that impact her life, and the movie doesn’t shy away from them. These women check in with each other about childcare before their planning meetings; they are forced to live with the consequences of terrifying run-ins with police; they light candles when they pray; they are survivors and sex workers. In some instances, they have to train twice, if not three times, as hard as their husbands once did. Even when not the central focus, Widows quietly and elegantly weaves all of these elements into the their narrative.

Widows leaves room for fun, but never loses track of the fact that this is not a game for these women. They aren’t in it for the diamonds or a girl power sing-a-long; they are trying to survive. They’re trying to make it another day, to protect their kids, to stretch their means for a little while longer. Each woman’s life was harmed by their partners, whose actions continue to haunt even after their deaths. The stakes of their heist are clear: to take back what they lost and finally put their fate in their own hands.

One of the oldest truths of patriarchy that when a husband makes a mess, his wife is expected to clean it up. Widows takes that unjust expectation and unravels it to its most heightened conclusion. 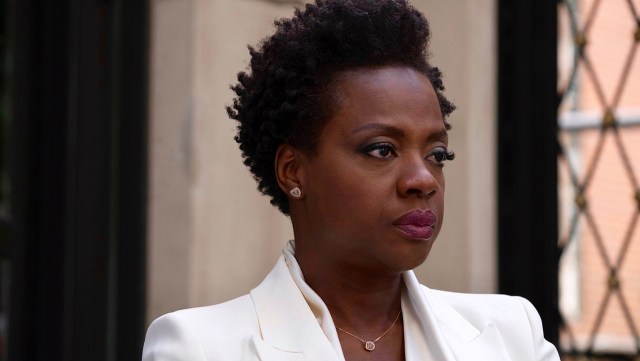 I must include every photo of Viola Davis looking badass in a suit. I don’t make the rules. (Just kidding, yes I do!)

It’s knotty and tense to watch as all the pieces fall into place, but nonetheless electrifying. Cynthia Erivo steals the screen as Belle, the single mom balancing multiple jobs who gets recruited as the team’s driver. Wait until you watch her run! I bet you’ll never forget it. If you enjoy playing the time-honored game of “which of these characters could be gay?”, she’s absolutely my pick (my second choice would be Michelle Rodriguez – she’s always a wee bit gay even when she’s not). Elizabeth Debicki finds an unexpected soulfulness in Alice, who starts the movie perhaps in the greatest peril, only to triumphantly find her strength. Finally there is Viola Davis, whose talent at this point exhausts any compliment I could give her. What is there left to say? She’s absolutely superb in this, as in all things.

I suppose Widows is about the heist after all. There are elaborate plans to puzzle together, menacing and sadistic villains to conquer (Get Out’s Daniel Kaluuya and Atlanta’s Brian Tyree Henry are absolute STAND OUTS in this regard), and mountains of money to collect. But, the women aren’t ultimately just stealing the money. They’re stealing back the ability to control their own lives. To get in at least one solid kick against the rancid, putrid system that forced their backs against the wall in the first place.

A few things specific things that I think Autostraddle readers are going to want to know and straight media won’t tell you! First up, there’s a very brief and not bloody few minutes of dog distress roughly a third of the way into the film. Second, when I got out of the movie on Saturday the first thing our very serious Senior Editor Heather Hogan wanted to know was if Viola Davis’ perfect biceps got to shine. My dear reader, they have an entire scene to themselves! Look for them in the film’s final act, and you can thank me later.