Most sex education doesn’t go beyond a heteronormative p-in-v narrative. According to Autostraddle’s lesbian sex survey (open to all women who have sex with other women), 81.79% of respondents had elementary or high school sex ed that didn’t talk about queer sex (2.71% had never had any safer sex education, not even from the internet).

Many cis women are also unfamiliar with their basic sexual anatomy and asking people to label or draw diagrams of their reproductive systems yields… interesting results.

Drawing on three years of medical school knowledge and an obstetrics-gynecology rotation where I did more pelvic exams than I can count, I’m going to guide you through the research to find out what’s relevant to your interests about safer sex, and what to do about it.

The Patient Is In 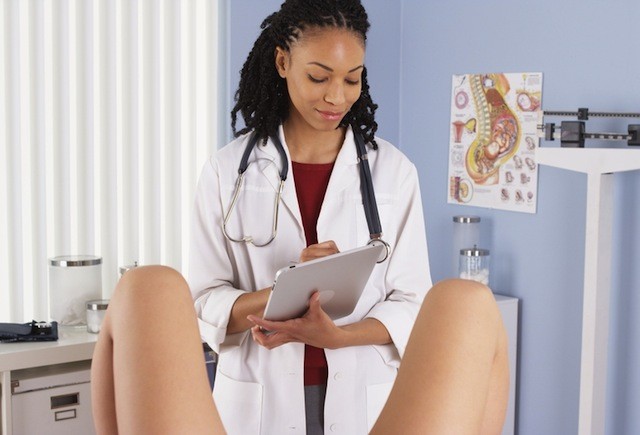 wow, you’ve even given timestamps for your sexual history

Queer women tend to underuse health services and come in later for care when compared to straight women. Part of the reason is that queer women are less likely to use reproductive services such as birth control, leading to fewer entry points into the healthcare system. Other reasons include discrimination, as well as a lack of cultural competence and awareness of health issues pertaining to this population. (Not all healthcare providers know what to tell queer women about safer sex, which doesn’t help.)

People with vaginas should have their first gynecologic visit between ages 13 and 15. This first visit includes a general physical exam and an external genital exam. There’s usually no need for a pelvic exam unless you have pain, abnormal discharge or bleeding or need certain tests.

The American Congress of Obstetricians and Gynecologists has great resources about what to expect for your first gynecologic visit and annual visits. If you’re seeing a doctor about a specific problem, they may ask you targeted questions about vaginal discharge, abnormal bleeding, urinary problems, pelvic pain, sexual dysfunction or infertility. 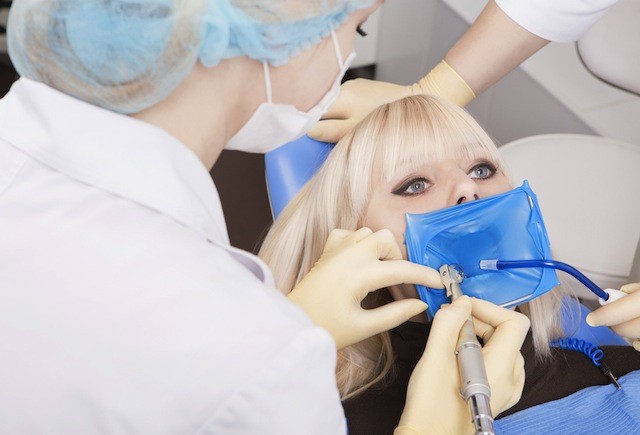 When asked how often they use protection, 59.61% of respondents to Autostraddle’s sex survey report never using it, while 20.41% report using it rarely. Only 6.77% use protection every time they have sex.

Women who have sex with women (WSW, the study’s wording) talk about barrier methods in a way that suggests hypothetical rather than actual use, according to a 2013 study. Many respondents were also confused about the difference between dental dams and female condoms.

A 2010 study surveyed 543 Australian WSW and found that, of the women who had oral sex with other women in the past six months, 9.7% used a dental dam at all and only 2.1% used dental dams “often.” Women who practiced oral-anal contact or had kinky sex involving blood were more likely to use dental dams. However, latex gloves and condoms were used more often than dental dams.

The lack of barrier use is concerning because STIs can be spread by contact involving the skin, genitals, mouth, rectum and bodily fluids. That also includes sex toys that are not protected by barriers between partners.

While some studies suggest that people with vulvas who have sex only with other people with vulvas have a lower STI risk, STIs can still be transmitted. In fact, oral-genital sex, oral-anal sex and sex toys may be more important risk factors for STI transmission than penile intercourse. STI risk also depends on other factors like number of sex partners and sexual practices.

Rather than going from frisky to risky, why not aim for not-so-risky business instead? Scarleteen has great guides on the simple and underrated art of washing your hands and safer sex barriers — including condoms (male/outside and female/inside), dental dams, gloves, and finger cots for both body parts and sex toys.

While it’s best to not share sex toys, plenty of people do. Unfortunately, this means you also could share STIs. That’s why you should know how to properly clean sex toys. Also make sure to use safer sex barriers on toys, wash them after use and sterilize them between partners.

If you’re a do-it-yourself kind of gal, you can make your own dental dams. While you’re at it, you might even want to make a safer sex utility belt to keep all your barriers within easy reach, you sexual health expert, you!

And when it comes to concerns about barriers leading to less intimacy and pleasure, Laurel Isaac sums it up perfectly:

“It’s a horrible misconception that safer sex is somehow less intimate or real than unprotected sex. And for queers, where the sex we have is already always under attack for not being ‘real,’ adding unfamiliar safer sex practices can be uniquely daunting.

But we are very real. Our bodies are real, the sex we have is real, and the risks inherent in our sexual activities are real. So, please, let’s protect each other…

For oral sex, too, I appreciate dams even when I don’t ‘have to’ use them. They’re silky and let me appreciate oral sex in a different way. Sometimes when I’m going down on someone, what I want more than anything is to really taste and smell them, to feel as close to their body as possible. Other times, because of my mood or where a partner is in their cycle, it’s just a bit of sensory overload. Dams are great for when you want to go down on your partner, but for whatever reason, want to feel a bit more space.”

Contraceptive methods can be important, too — especially if you’re sleeping with someone with a reproductive system that could lead to pregnancy. And non-barrier contraceptive methods have other benefits like decreasing migraines, pain and bleeding associated with menstruation. They can also reduce acne, body and facial hair growth, and the risk of uterine, ovarian and colon cancer.

Some birth control methods last longer than others and are more effective, such as the intrauterine device (IUD). A copper IUD lasts for 10 years and a progestin IUD lasts for five years. Birth control implants last for three years. Other forms — pill (daily), patch (weekly), ring (monthly), injection (every three months) — take more maintenance. Emergency contraception and sterilization can be options in the right circumstances.

The ABCs of STIs 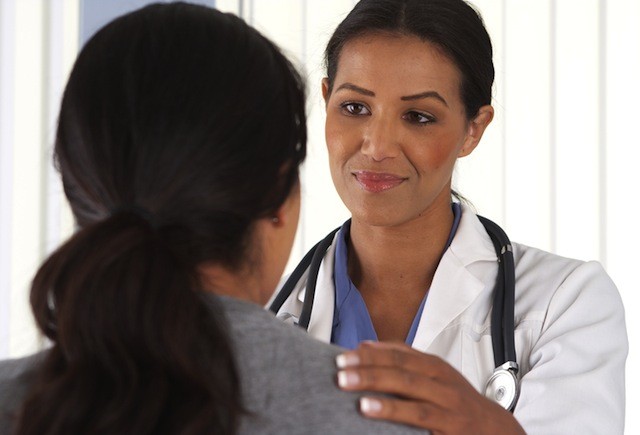 Even though my high school sex education class was better than this, the abstinence-plus model focused on the ABCs (“abstinence,” “be faithful,” “correct and consistent condom use”) and a few STIs was incomplete.

I never learned about other STIs, like bacterial vaginosis. In fact, I never even heard of it until medical school. Yet there is an unusually high prevalence of bacterial vaginosis among WSW, especially those who have had more partners. In monogamous relationships where one woman has it, 25 to 50% of their partners are also infected. While bacterial vaginosis is relatively benign — most women are asymptomatic or have vaginal discharge with a fishy odor — it can increase the risk of acquiring other more dangerous STIs.

Human papilloma virus (HPV), which causes cervical cancer and genital warts, has been detected in about one-third of WSW. Because of the false belief that they have a lower risk of acquiring HPV, there is less screening and delayed care. Even though there are vaccines that prevent infection with most types of HPV that cause genital warts and cancer, some patients may not be getting it. This leads to higher cervical cancer rates among bisexual women (2.1%) and lifetime lesbians (2.2%) when compared to straight women (1.3%).

Many STIs are asymptomatic and increase your risk for contracting other STIs. Some STIs like chlamydia can even lead to painful pelvic inflammatory disease and infertility. A study of young women from 1997 to 2005 found that chlamydia rates were higher in those who reported having sex with women (7.1%) versus those who reported having sex with men exclusively (5.3%). In fact, among women at risk (new, multiple or symptomatic partners), those who had sex exclusively with women had higher chlamydia rates than those who had sex with only men or with men and women.

This is why regular testing is so important. Try going on a date with partners or friends to an STI clinic, and grab some free safer sex barriers before heading to brunch. Plus, some company in the waiting room makes the overly dramatic ’90s sexual health videos somewhat bearable.

You can get tested in a lot of free and confidential clinics — use this directory to find a clinic near you. STI testing is quick and simple, with a usual 10-day turnaround for results and only 30 minutes for a rapid HIV test result. During your visit, you may have a pelvic exam to look for signs of infection (ulcers, warts, rashes, discharge, etc.). The doctor may take a fluid, tissue, blood or urine sample for further testing.

And if you want to learn more about STIs, check out my STI cheat sheet with information from UpToDate.

How are you going to change your safer sex behaviors? Do you have any questions that the guide didn’t address? I’d love to hear your experiences and questions in the comments!

NOTE: This article and the accompanying chart are intended to educate, but are in no way substitutes for medical advice or attention. The opinions expressed are those of the author, Christy Duan, and not of the institutions with which she is affiliated. This STI chart was created using information from UpToDate.

Christy Duan is a rising fourth-year medical student at Albert Einstein College of Medicine and an award-winning writer who has published in The Detroit Free Press, Quartz, KevinMD.com, and Abaton. In 2012, she graduated from the University of Michigan with a Bachelor of Science in Statistics. Christy is passionate about social justice and global health. Her work has spanned from the Usambara mountain range of Tanzania to the sprawling metropolis of Hong Kong, and from community HIV interventions to data mining. Read more of her work at christyduan.com.

Christy has written 1 articles for us.